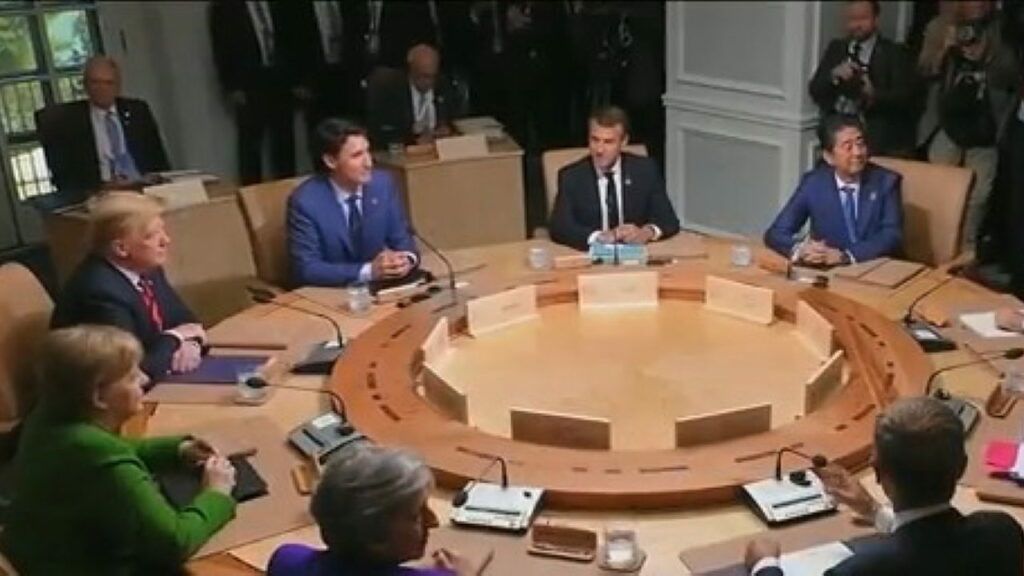 23 Aug 2019 – The Group of Seven (G7) self-declared advanced nations meet this weekend in France for their 45th annual summit. US President Donald Trump caused a stir ahead of the gathering in Biarritz when he remarked that Russia should be included in the format, thereby making it a G8 summit.

“Russia should be at the negotiating table,” said Trump, in a rare moment of lucidity.

His view of including Moscow appears to be shared by France’s President Emmanuel Macron who hosted Russian counterpart Vladimir Putin in southern France earlier this week, only days before the G7 summit.

Of course, Russia should be at the table to discuss resolving global economic problems. Not just Russia, but China, India and a few others as well.

Since the G7 club was created in 1975 during the Gerald Ford administration the world has undergone transformative changes from the days when the US, (West) Germany, Britain, France, Italy, Canada and Japan were deemed then to be the most powerful national economies.

Today, China is second to the US in terms of its economic size. The top 10 national economies have various ranking iterations, depending on which yardstick is used to compare.

In other words the present G7 line-up is an arbitrary listing. Indeed, its exclusivity is something of an anachronism in today’s world. It’s a throwback to a bygone era when Western nations were more dominant (save for Japan’s inclusion in the original club). The contours of the world have become more multilateral and multipolar. The exclusion of China from the G7 is perhaps the most glaring anomaly.

In a tacit admission of the changed global reality that’s why there is the larger format of the G20 (formed in 1999) which in addition to the G7 includes China, India, Russia, Brazil, South Africa, South Korea, Turkey, Saudi Arabia, and others.

The so-called BRICS (Brazil, Russia, India, China, South Africa) is another sign of changed times, as are numerous other economic fora such as the Association of Southeast Asian Nations (ASEAN), the Asia Pacific Economic Cooperation (APEC), the Eurasian Economic Union (EEA), and the Latin American bloc Mercosur.

Given that the G7 is supposed to be a forum for coordinating macroeconomic policies to enhance global economic growth, one would think that the logical requirement would therefore be for inclusion of more nations in order to more effectively address the ostensible purpose.

As it stands, the limited G7 club is a rather clapped-out vehicle. It’s a bit like a broken down auto with flat tires, a blown gasket and crankshaft missing. Does anyone seriously think that Italy in its present political meltdown is in a position to boost the world economy?

It’s also incongruous that the biggest member of the club, the United States, has no interest in coordinating policy with anyone else. President Trump’s trade war with China, the Europeans and the rest of the world is more akin to the 1930s practice of go-it-alone mercantilism and predatory capitalism. We know how disastrous that turned out with global depression and world war.

Trump’s reckless gung-ho “America First” policy (and to hell with everyone else) is casting a dark cloud on the world economy from China’s output slumping and Germany’s exports plummeting. Ironically, “business genius” Trump seems to be dimly realizing that the inevitable repercussions are rebounding like a boomerang with harmful impact on the US economy. Yet he says he’s not letting up on his America First drive to the abyss.

So, sure, if there were a genuine commitment to improve global economic outlook and uplift the wellbeing of ordinary people around the world then the leading nations should be working together in a collegiate planned fashion, and with as much outreach to others as possible.

Thus, without doubt, the leaders of China, Russia, India and others should be in attendance at the summit in France this weekend. Then it would supposedly turn into a forum not unlike the G20. Which makes the point: why is the G7 even continuing to exist?

There is an analogy with the US-led NATO military alliance. That organization was formed in a very different geopolitical world compared with the present. Why does NATO continue to exist? It’s putative security function is redundant.

So too it could be argued is the United Nations Security Council redundant with its five permanent members of US, Russia, China, France and Britain. Surely that forum should be overhauled too reflect a contemporary multipolar world. In short, the world, like history changes, and so too should mechanisms of governance.

Arguably, however, the G7 is not an economic forum, despite its public image. It’s an arbitrary political clique aimed at reinforcing a presumed Western dominance. A sign of this caprice was when the Russian Federation was admitted to the G7 in 1997 which was then renamed the G8. The admission of former President Boris Yeltsin was permitted because he was feckless towards Western strategic demands. Russia remained a G8 member for 17 years until the Ukraine conflict erupted and President Vladimir Putin was accused of “invading” that country and “annexing” Crimea. Those Western allegations are easily countered with evidence of NATO subversion of the elected government in Kiev in order to prize the former Soviet republic away from Moscow’s orbit.

Russia’s exclusion from the G8, which then reverted back to the G7, has been a political punishment to bolster a propaganda narrative for undermining and isolating Russia internationally. This is again why the G7 is no longer a viable forum for its stated purpose of advancing the global economy. It’s a useless talking shop in an utterly changed world.