Hawai’i: Mauna Kea Is only Latest Thing They Want to Take, ‘We Will Not Give It to Them’

So far Hawaiians have managed to stop all efforts to begin construction through legal challenges and civil disobedience. 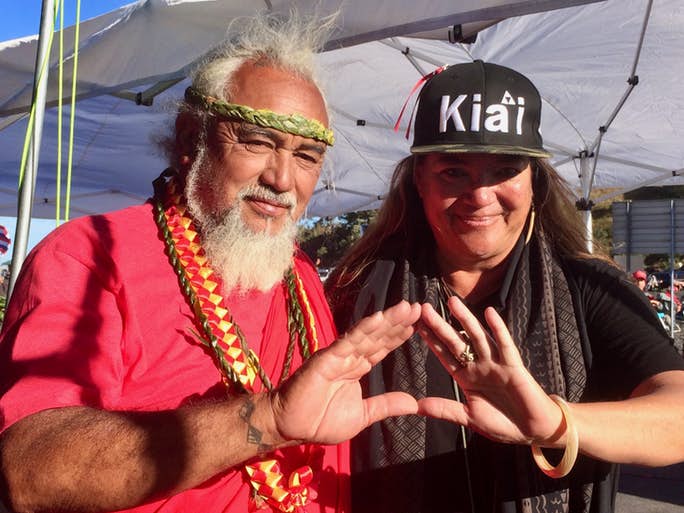 21 Jul 2019 – Mauna Kea, also known as Mauna a Wakea, is a 13,800 foot high mountain on Hawai‘i Island, and considered the most sacred site to Kanaka ‘Ōiwi, the Native Hawaiian people. Named after Wākea, Father Sky, it is home to a number of religious deities, and is a traditional burial ground for the most revered ali‘i (royalty) and kahuna (priests). The spiritual and cultural significance of the mauna predates the European-American colonization of the earth by millennia.

Hawaiians have fought against Western astronomy on the summit since the industry got a foothold there in the late 1960s. Fifty years and 13 telescopes later, the newest addition, if the state and the TMT Corporation have their way, will be the Thirty Meter Telescope.

So far Hawaiians have managed to stop all efforts to begin construction through legal challenges and civil disobedience. 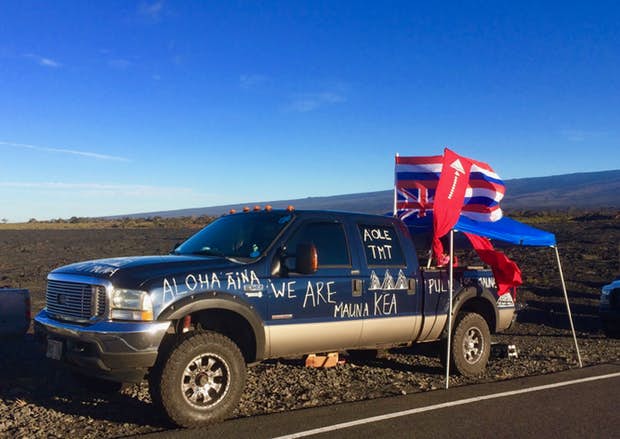 One of hundreds of vehicles lining the Saddle Road, Hwy 200
(Photo by Anne Keala Kelly)

The first protest on Mauna Kea disrupted the internationally live-streamed groundbreaking ceremony in October 2014. That was followed by an around the clock vigil that began in March of 2015. Then there were 31 arrests in April, and a few months later in June, a day-long blockade that forced a convoy of workers and equipment to turn around resulted in 11 arrests.

While news media typically portray resistance to the telescope as Indigenous culture versus Western science, Hawaiians who oppose the project are quick to point out historically relevant events that have led up to this moment. Among those are the U.S. militarily backed overthrow of Queen Lili‘uokalani’s government, the 1898 U.S. takeover, and what Hawaiians refer to as the 1959 “fake statehood.” The telescope construction is experienced by Hawaiians as part of an ongoing lineage of more than a century of oppression, racism, and forced Americanization that has taken Hawaiian land, exploited and commercialized Hawaiian culture, and normalized the practice of desecrating Hawaiian sacred sites.

“This mountain represents the last thing they want to take that we will not give to them,” said longtime activist Walter Ritte.

Now, as week one of the latest standoff between Hawaiians and law enforcement has ended, a week that included the arrests of 33 kupuna, or elders, two things are clear. Hawaiians have no plans of giving up their blockade, and Governor David Ige, a Democrat, has no intention of postponing efforts to move the Thirty Meter Telescope’s construction equipment onto the summit. 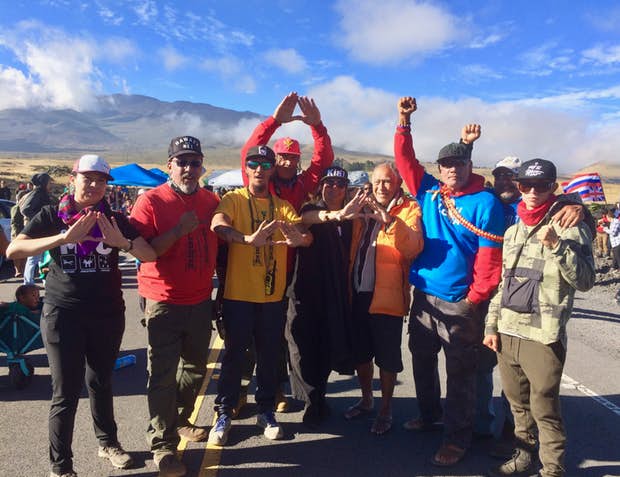 Leaders of the movement to protect Mauna Kea.
(Photo by Anne Keala Kelly)

Healani Sonoda-Pale, activist and spokesperson for Ka Lahui Hawai‘i Political Action Committee, was still reeling from the governor’s Friday afternoon press conference, as she walked me through the large encampment at the base of Pu‘u Huluhulu. Located across the Saddle Road (Hwy 200) from the Mauna Kea Access Road, where Ritte and others chained themselves to a cattle grid earlier in the week, the area has been designated a pu‘uhonua. That means it is a place of refuge for the thousands who have arrived to stop the telescope’s construction. Standing in the Mauna Medic tent, which can best be described as a spotless, well-organized space where people receive free lomilomi massage and treatment of minor injuries, she expressed her disappointment with Governor Ige. On Friday afternoon, he held a press conference at the Hilo Airport. Though it is only a thirty-minute drive from the protest, he never left the airport.

“When I heard him say that we’re dirty, and how we are not keeping our pu‘uhonua clean, I thought, wow, he’s going to have to come up with better racist tropes than the dirty Hawaiian,” Sonoda-Pale said. “Because we’ve been called that since even before my parents were kids.”

Ige had, indeed, said, “There are thousands of people on the mountain” with “inadequate bathroom and rubbish facilities … and we’re seeing the impacts on the environment.”

Contrary to the governor’s assertions, however, the camp is clean, the protestors have hired their own portable latrine service, and they rented gas heaters to keep people warm at night. There is nothing unattended. The food tent is a culinary camp-out delight. And the entire operation, on both sides of the highway is being conducted under a strict code of conduct referred to as kapu aloha, a refrain that has characterized every protest against the Thirty Meter Telescope. Kapu aloha is a cultural practice of non-violence, a reaffirmation of the power of peaceful civil disobedience even in the face of injustice. Which is why the governor’s words and actions were so offensive.

Hours after the elders were arrested, Ige issued an emergency proclamation, an act usually reserved for natural disasters and situations of extreme peril. He said it was to allow broader options for law enforcement, including using the National Guard. Photos of uniformed members of the guard at the Honolulu Airport heading for Hawai‘i Island began circulating on social media the next day.

But during his Friday press conference, Ige painted a picture of a protest on the verge of chaos, citing “drug and alcohol use,” and poor leadership that has “not been able to maintain order and the neutral terms of the pu‘uhonua.” Further, he said that “the emergency proclamation remains in effect because of this unsafe situation.” 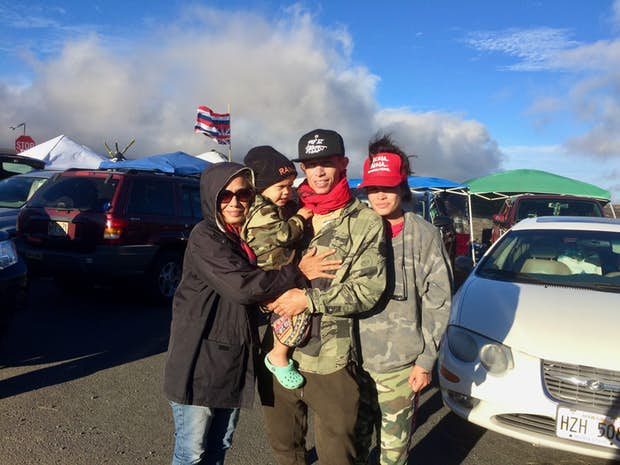 Lakea Trask, one of the activists who stood vigil on Mauna Kea for months during 2015, comes from a family of cultural practitioners, teachers and activists. Most notably, his aunties Haunani-Kay Trask and Mililani Trask are remembered as leaders of the Hawaiian sovereignty movement during the 1980s and 90s.

“The governor is using doublespeak,” Trask said. “He says Hawaiians are trashing the area, but that’s pure agitprop, especially considering what’s been done to Mauna Kea. It’s sad to see the settler state acting like fascists. We know how corrupt the state is, we know they’re lying.”

Kealoha Pisciotta, one of the leaders of the resistance, and spokesperson for Mauna Kea Anaina Hou, the group responsible for legal challenges against the Thirty Meter Telescope and other telescopes going back more than 20 years, wasn’t surprised by Ige’s version of events.

“The state presents a false narrative. Hawaiians don’t have an issue with Western astronomy, but the way it is conducted on Mauna Kea, the most sacred site to our people, undermines our traditional religious and cultural practices,” Pisciotta said,

Pisciotta has, countless times, raised the issue of environmental destruction to endangered species habitats on the summit, threats to one of the island’s aquifers, and the fact that Mauna Kea is a traditional burial ground. There will be a court hearing and a possible Temporary Restraining Order. So Pisciotta spends her days in protest and her nights preparing the legal argument.

“I believe in people power and legal power,” she said. “But the damage to our sacred mauna, the arrests of our kupuna … Indigenous wisdom is needed now more than ever to help heal the earth.” 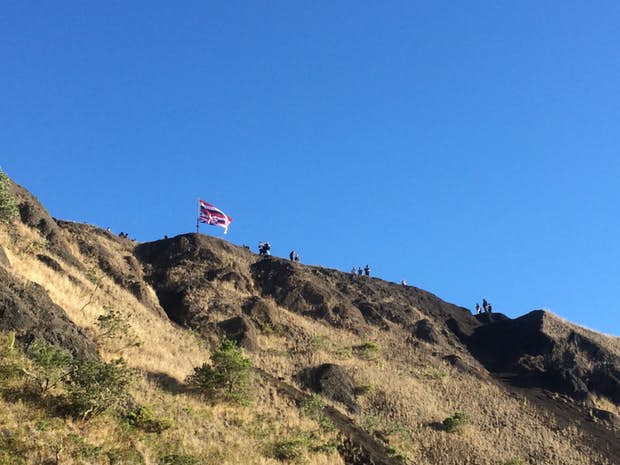 Pu’u Huluhulu is the hill above the camp.
(Anne Keala Kelly)

After images of elders being arrested were broadcast, protests and signs of solidarity with the people standing up to protect Mauna Kea began to spread. Traffic on Honolulu’s H1 Freeway was brought to a crawl two days in a row when cars and mopeds flying large Hawaiian flags dominated all four lanes. Traffic cameras caught the events, which took place during the afternoon rush hour. And the number of protestors at the Pu‘u Huluhulu camp have swelled to more than 3,000.

Indeed, it was painful for many Hawaiians to see beloved cultural practitioners and others being loaded into police vans, with their wrists zip-tied.

Among those arrested was Onaona Trask, the mother of Lakea Trask, who refused to walk to the van and had to be carried. She teaches Hawaiian language to children, and said that one of the arresting officers was a former student and someone she had known since birth.

“It was kaumaha (with a heavy heart),” she said. “I talked to her in Hawaiian, and told her that I love her. I said, ‘I carried you as a baby, so it’s okay for you to carry me now.’

“That’s what colonization does to us” she said. — “It divides and pits us against each other. But being colonized doesn’t mean we aren’t Hawaiian. The Thirty Meter Telescope is the colonizer trying to exterminate our identity and our sense of self as Hawaiians. But this mountain is so sacred to us we must protect it. In the Kumulipo (Hawaiian creation story) Mauna Kea is where our akua (gods) dwell.”