Hundreds of Zoos and Aquariums Accused of Mistreating Animals 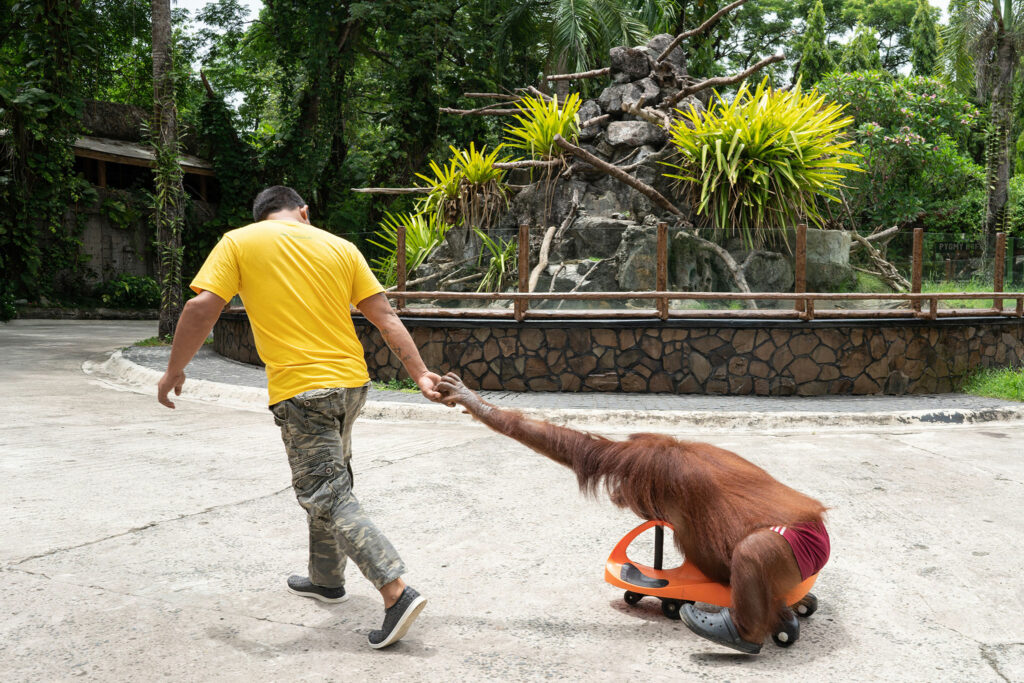 In a new report by the organization World Animal Protection, the World Association of Zoos and Aquariums is criticized for not holding member and affiliated facilities to high enough standards of animal welfare. Here at Avilon Zoo, in the Philippines, an orangutan dressed in human clothes is used as a photo prop for tourists. Photograph Courtesy World Animal Protection

15 Aug 2018 – In a new report, an animal welfare group has flagged hundreds of zoos affiliated with the World Association of Zoos and Aquariums (WAZA) for mistreating animals, including making big cats perform in gladiator-style shows, elephants play basketball, and diapered chimpanzees ride scooters.

WAZA, founded in 1935, is a global organization of zoos and aquariums that promotes conservation and animal welfare. Unlike the U.S.-based Association of Zoos and Aquariums (AZA), which requires its members to undergo an accreditation process, WAZA is a member organization that doesn’t require accreditation.

According to Gavrielle Kirk-Cohen, WAZA’s director of communications, the organization relies on its accrediting member associations to enforce their standards among their member zoos and aquariums. Becoming a WAZA member requires filling out an application, submitting letters of support from two other WAZA members, and paying a fee. Zoos, for example, must pay 2,500 euros, or nearly $2,800.

According to the report, by World Animal Protection (WAP), an international nonprofit organization that promotes welfare and humane treatment, 75 percent of WAZA’s 1,241 members—including those defined by WAP as “indirect” members (zoos or aquariums that belong to WAZA-member associations)—offer at least one animal-visitor interaction. WAZA, which doesn’t recognize indirect members, claims only 400 members worldwide. Such contact, the report notes, can be damaging for animals’ mental and physical well-being and often requires training methods such as premature separation from mothers, physical restraint, and pain- and fear-based conditioning. 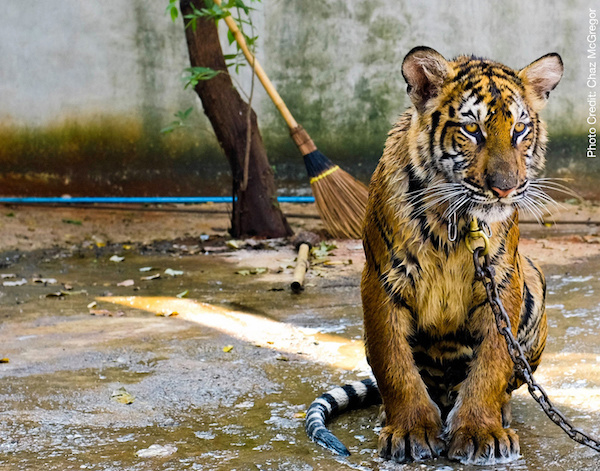 “Zoos have this almost sacred kind of role in conservation,” says Neil D’Cruze, WAP’s global wildlife advisor who contributed to the report. “It’s time for [WAZA] to take a step back and take the leadership role that we as visitors, let alone WAP as an NGO, need them to take.”

D’Cruze says WAP included indirect members in the report because it believes WAZA should, at a minimum, outline a code of ethics and animal welfare policy for those zoos and aquariums, which it doesn’t now.

The report’s researchers identified a dozen venues of particular concern, which they visited alongside researchers from the animal advocacy organization Change For Animals Foundation. These venues include African Lion Safari in Canada, Cango Wildlife Ranch in South Africa, and SeaWorld San Antonio in Texas. WAP considers SeaWorld to be an indirect member because it’s accredited by the Association of Zoos and Aquariums (AZA), which is a member of WAZA.

Representatives from African Lion Safari did not respond to a request for comment.

The report said Cango Wildlife Ranch “offers visitors the chance to pet cheetahs and servals in an enclosed yard, taking selfies with the animals under the supervision of staff members.”

Tammy Moult, assistant director of tourism at Cango Wildlife Ranch, said they “were absolutely broken” at Cango’s inclusion in the WAP report. “We started doing substantial research on [WAP] and found a lot of scorned and unhappy ex-employees, donators, contributors, and many cracks and holes in the organization became clear without much effort,” she said in an email. “The ‘facts’ are grossly unfounded and irresponsible.”

WAP notes that SeaWorld San Antonio offers shows and opportunities to swim, pet, and pose with dolphins, which respond to commands from trainers. 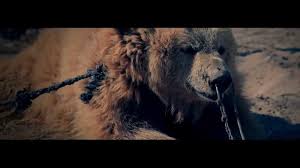 Animals like Leena are abused and mistreated by their human captors so they can be broken down and trained to perform in front of humans. iSpot.tv

The AZA, of which SeaWorld San Antonio is an accredited member, says the facility meets or exceeds their accreditation requirements. “Accredited facilities, like SeaWorld San Antonio, hold themselves to high standards and are still only a fraction of facilities that hold and display animals,” AZA president and CEO Dan Ashe wrote in an emailed statement.

In a statement, WAZA said WAP’s report was incorrect and that the organization takes animal welfare seriously. “WAZA is in accord with WAP that such practices have no place in a modern zoo or aquarium,” the statement says. “Unfortunately, the report contains a number of inaccuracies, including naming institutions which are not WAZA members and thus which WAZA has limited jurisdiction over.” 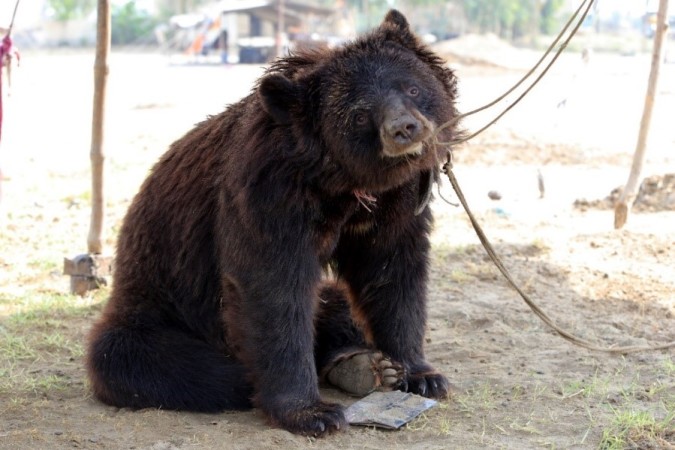 D’Cruze says Dolphin Island and Jungle Cat World were members when WAP compiled their report earlier this year and are listed as members in WAZA’s 2017 annual report—the most recent available report. Dolphin Island still has the WAZA logo on its website.

Of the 1,241 venues WAP surveyed, 940 were, by its definition, indirect members. The main point of contention between WAZA and WAP is over these indirect members. According to Kirk-Cohen, zoos and aquariums WAP listed as indirect members in the report are not members, and WAZA can’t impose its ethics standards on non-members.

“It is misleading to state that the remaining seven [of the 12 venues of particular concern] are ‘indirect WAZA members,’” she says. “We’re quite limited in capacity in what we can do, especially when it comes to non-members,” she says.

CAZA’s Shafer says quibbling over membership technicalities is not the answer here. “The big issue is not what label one organization has or another organization has,” she says. “It’s can we learn something from this to help improve the conditions of the animals?” 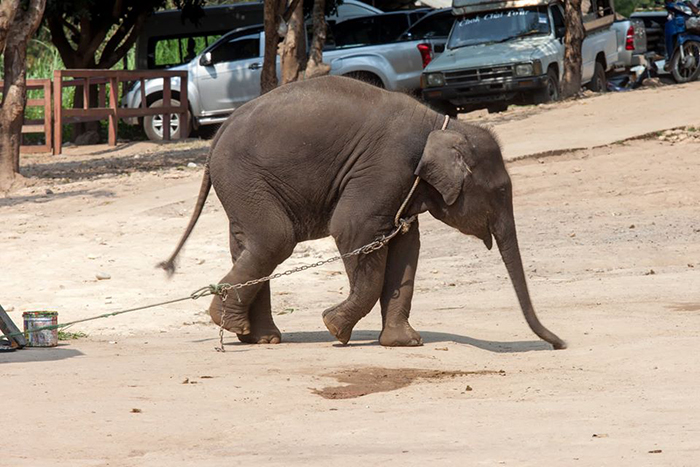 WAZA’s code of ethics and animal welfare, which is binding for members, states that if they use wild animals in presentations, they must “focus on natural behavior” and “not demean or trivialize the animal in any way.” Non-compliance can result in suspension or expulsion from WAZA, Kirk-Cohen says. She says that during the past year three members have had their WAZA membership terminated after losing accreditation with their regional or national association.

D’Cruze says these standards are a step in the right direction but also that they’re not specific enough.

“It’s really great, and there’s some really positive language in there that helps set the scene, but where’s the specifics?” he says. “What actually constitutes unnatural and demeaning?”

“Considering the vast range of species our members take care of,” Kirk-Cohen says, it’s not possible to provide a list of unnatural or demeaning behaviors, but they’re ones animals wouldn’t exhibit in the wild, Kirk-Cohen says. WAZA relies on accrediting associations to set more specific standards.

World Animal Protection’s report describes venues that offered encounters where visitors can stroke, kiss, and cuddle with big cats, shows where humans “surf” on the backs of dolphins, and performances in which elephants paint pictures with their trunks. The most common interaction was petting—offered by 43 percent of facilities, most often with mammals and reptiles. About a third offered walking or swimming through an enclosure, 30 percent had performances involving wildlife, and 23 percent had hand-feeding experiences, in which tourists can provide food and water for captive wild animals, which brings them into direct—potentially dangerous—contact with them.

These experiences are inherently stressful for animals, says Nancy Blaney, director of government affairs for the Animal Welfare Institute, a Washington, D.C.-based nonprofit.

Wild animals belong in the wild, but in some instances—for example, when an animal’s been a rescued from a roadside zoo—that’s not possible, D’Cruze says. The problem, he says, is when an organization “slips over into commercial use and entertainment.”

“Getting [animals] to the point where they’re completely safe around people involves a whole level of different training and breaking of the animal’s spirit,” D’Cruze says. “There’s a difference between a domesticated species like a cat or a dog that’s been changed over thousands of years biologically and behaviorally to be around people, and an animal that’s been broken to be tame.”