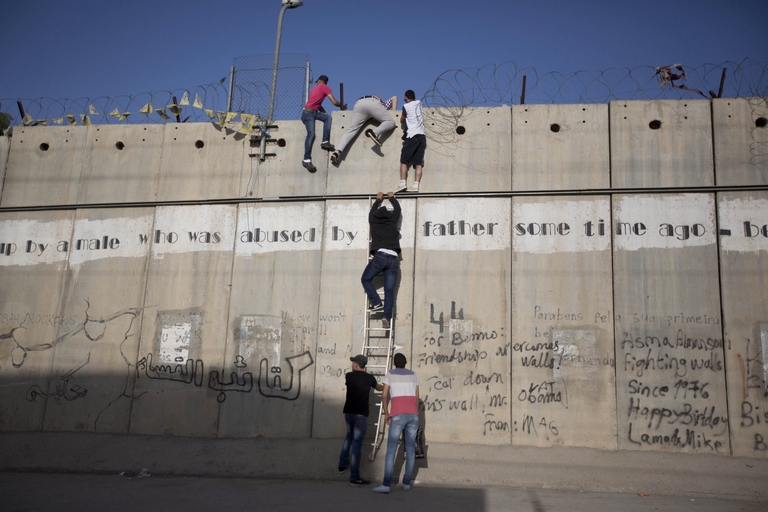 Palestinians climb over the wall in Al-Ram, north of Jerusalem. Israel says the barrier keeps out Palestinian attackers, while Palestinians say it is a land grab into territory they want for a future state.  (Majdi Mohammed / AP, File)

9 Aug 2019 – A central debate within the U.S. Jewish community involves Zionism and its relationship to Judaism. In the recent anthology “Reclaiming Judaism from Zionism: Stories of Personal Transformation,” 40 rabbis, scholars and activists reflect on their particular intellectual and emotional journeys that began with an unquestioning love of Israel. Like the other contributors, I became aware that the ideology of Jewish nationalism and the policies of the Israeli government have corrupted my concept of Judaism and its central religious and cultural values.

I grew up in a family, post Nazi Holocaust, that viewed the creation of a modern Jewish state as a miracle to be celebrated. We idealized the kibbutzim, saved our quarters to plant trees in the barren land and loved the romantic ideal of the Israeli pioneers making the desert bloom.

At the same time, like many Jews, I was proud of my progressive politics. I supported civil rights, women’s rights, labor unions; this was my lived expression of a religion that extolled healing the world and working for justice. As a second-generation immigrant, it was also how I saw my role in America, a land where my grandparents, fleeing the pogroms of Eastern Europe, found a home, even if it was only the hard scrabble ghettos of Brooklyn in the early 1900s.

My transformation began as I delved into the complicated issues of colonialism, imperialism, racism and genocide. I realized that my education about the creation of the U.S. had conveniently left out the destruction of native peoples, the primacy of slavery, the ubiquitous racism and the role of European colonialism. Similarly, there was much in my Hebrew school and subsequent Jewish education that was left unspoken about the founding of the state of Israel.

I experienced an awakening as I learned from the Israeli and Palestinian historians who gained access to newly opened state archives that told the story of the ethnic cleansing of Palestine. As I began to travel and work in the region, my connections with progressive Jewish Israelis and Palestinians became a force that I could not turn back. Standing at an Israeli checkpoint in the West Bank with hundreds of mostly Palestinian women and children waiting for a 20-year-old, heavily armed Israeli soldier; sifting through the puzzles, broken dishes, Legos and underwear in the rubble of a bombed neighborhood in Gaza; listening to women who grabbed their children and ran from Israeli bombs in 2014, stumbling over blood and shattered bodies — these are all experiences that cannot be “unseen.”

This led me to question Zionism, the ideology of Jewish nationalism, where the creation and defense of a Jewish state is the only viable answer to anti-Semitism. I learned that this is a modern idea born out of European Jew-hatred. The ideology was modeled after European settler colonialism: build a state in an untamed region of the world and bring modernity to the remaining natives. Zionism is also the litmus test for being a good Jew in America. I began to understand that Zionism inherently involves harm to Palestinians who were living in historic Palestine when Jewish immigration began in the early 1900s. In 1948 with the expulsion of 750,000 and the destruction of more than 450 villages, the Palestinian people were ultimately forced to bear the price of the Nazi Holocaust. That Nakba (catastrophe) has continued to the present day with the Israeli government’s racist and militaristic approaches to the challenging project of sharing a land that is claimed by two peoples.

Like many Jews, I cannot support an ideology that is grounded in Jewish privilege and persecution of another people. This has been catastrophic for Palestinians and deeply corruptive for Jews. I say this out of love, not self-hatred. Safety for Jews will not come from circling the wagons, building bigger walls and more invasive drones. Safety will come by building coalitions with other communities, by developing inclusive societies grounded in equality, democracy, and the fight against the extreme militarism and growing intolerance that is gripping much of the world.

Judaism developed as diasporic Jews created a spiritual response to dispersion and exile; a multicultural, multinational philosophy based on beliefs and values, not military might. The very recent development of political Zionism buttresses the needs of a militarized state where historical Jewish victimization justifies structural Jewish privilege and any level of violence in the name of “self-defense.” This is incompatible with a religion grounded in love of the stranger and pursuing justice, and a culture that supports human rights and international law.

After centuries of powerlessness, how we as a community handle our new positions of power and privilege is critical to the survival of an ethical Jewish tradition as well as a just resolution to a more than century-old struggle in historic Palestine that is being fought in our name.

Alice Rothchild is a Seattle author, filmmaker, and retired obstetrician-gynecologist. She is the author of three books, most recently Condition Critical: Life and Death in Israel/Palestine, and has contributed to a number of anthologies including Reclaiming Judaism from Zionism: Stories of Personal Transformation.