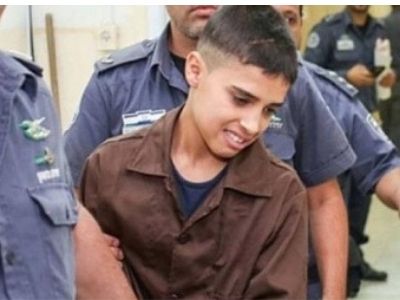 Ahmad Manasra was tried and indicted in Israeli military court when he was 13 years old.  (Photo: File)

7 Aug 2019 – On July 29, 4-year-old Muhammad Rabi’ Elayyan was reportedly summoned for interrogation by the Israeli police in occupied Jerusalem. The news, originally reported by the official Palestinian news agency, WAFA, was later denied by the Israeli police, more than likely in an attempt to lessen the impact of the PR disaster that followed.

The Israelis are not denying the story in its entirety, but are rather arguing that it was not the boy, Muhammad, who was summoned, but his father. It was Rabi’ Elayyan, they claim, who was called into the Israeli police station in Salah Eddin Street in Jerusalem to be questioned regarding his son’s actions.

The child was accused of hurling a stone at Israeli occupation soldiers in the Issawiyeh neighborhood, which is a constant target for Israeli violence. The neighborhood has also been the tragic location of house demolitions under the pretext that Palestinians there are building without permits. Of course, the vast majority of Palestinian applications for such permits to build in Issawiyeh, or anywhere else in Jerusalem, are denied routinely, while Jewish settlers are allowed to build on stolen Palestinian land unhindered.

As such, Issawiyeh is no stranger to the ridiculous and unlawful behavior of the Israeli army. On July 6, for example, a mother from the beleaguered neighborhood was arrested in order to put pressure on her teenage son, Mahmoud Ebeid, to turn himself in. The mother “was taken by Israeli police as a bargaining chip,” Mondoweiss reported, quoting the Jerusalem-based Wadi Hileh Information Centre.

The Israeli authorities are justified in feeling embarrassed by the whole episode concerning the 4-year-old boy, thus the attempt to poke holes in the story. The fact is, though, that WAFA’s correspondent in Jerusalem had, indeed, verified that the warrant was in Muhammad’s, not Rabi’s, name.

While some news sources bought into the Israeli propaganda and readily conveyedthe cries of “fake news”, one must bear in mind that this was hardly a one-off incident. For Palestinians, such news about the detention, beating, and killing of their children has been one of the most consistent features of the Israeli occupation since 1967. 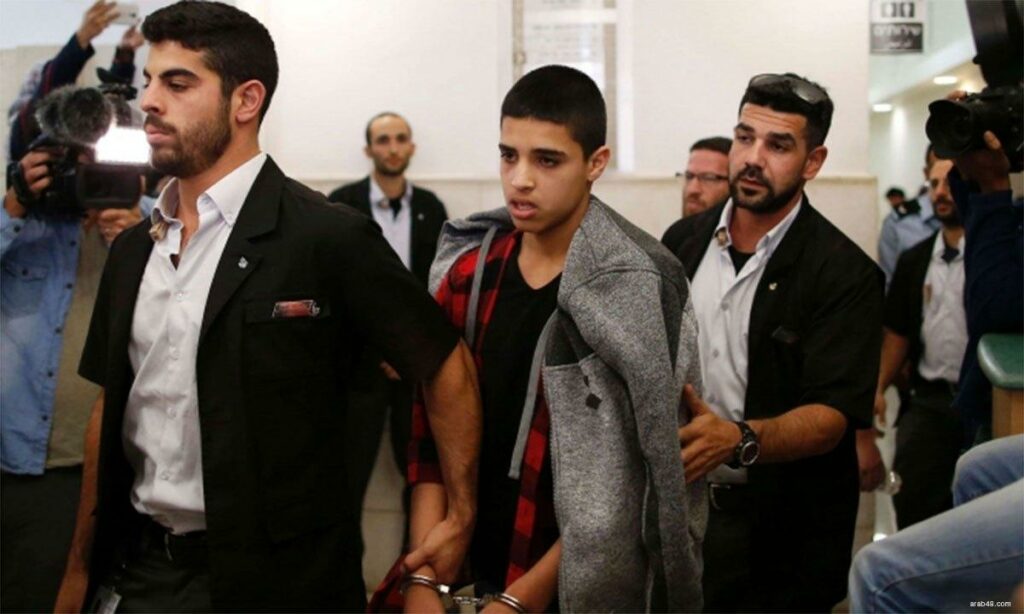 Ahmed Manasra, 14, leaves the district court in Jerusalem on November 7, 2016

Just one day after Muhammad was summoned, the Israeli authorities also interrogatedthe father of a 6-year-old child, Qais Firas Obaid, from the same neighborhood of Issawiyeh. This particular boy was accused of throwing a juice carton at Israeli soldiers.

“According to local sources in Issawiyeh the [Israeli] military sent Qais’s family an official summons to come to the interrogation center in Jerusalem on Wednesday [July 31] at 8 am,” reported the International Middle East Media Centre (IMEMC). In one photo, the little boy is holding the Israeli military order written in Hebrew up to the camera.

The stories of Muhammad and Qais are the norm, not the exception. According to the prisoners’ advocacy group, Addameer, there are currently 250 Palestinian children being held in Israel’s prisons. Approximately 700 Palestinian children are taken through the Israeli military court system every single year.

“The most common charge levied against children is throwing stones,” reports Addameer, “a crime that is punishable under military law by up to 20 years in prison.”

That is why Israel has every right to be embarrassed. Since the start of the Second Intifada in 2000, some 12,000 Palestinian children have been detained and interrogated by the Israeli army.

Moreover, it is not only children and their families who are targeted by the Israeli military but also those who advocate on their behalf. Just last week, on July 30, Palestinian lawyer Tariq Barghouth was sentenced to 13 years in prison by an Israeli military court for “firing at Israeli buses and at security forces on a number of occasions.”

As unlikely as the accusation of a well-known lawyer firing at “buses” may sound, it is important to note that Barghouth is well-regarded for his defense of Palestinian children in court. He has also been a headache for the Israeli military court system for his strong defense of Ahmad Manasra. 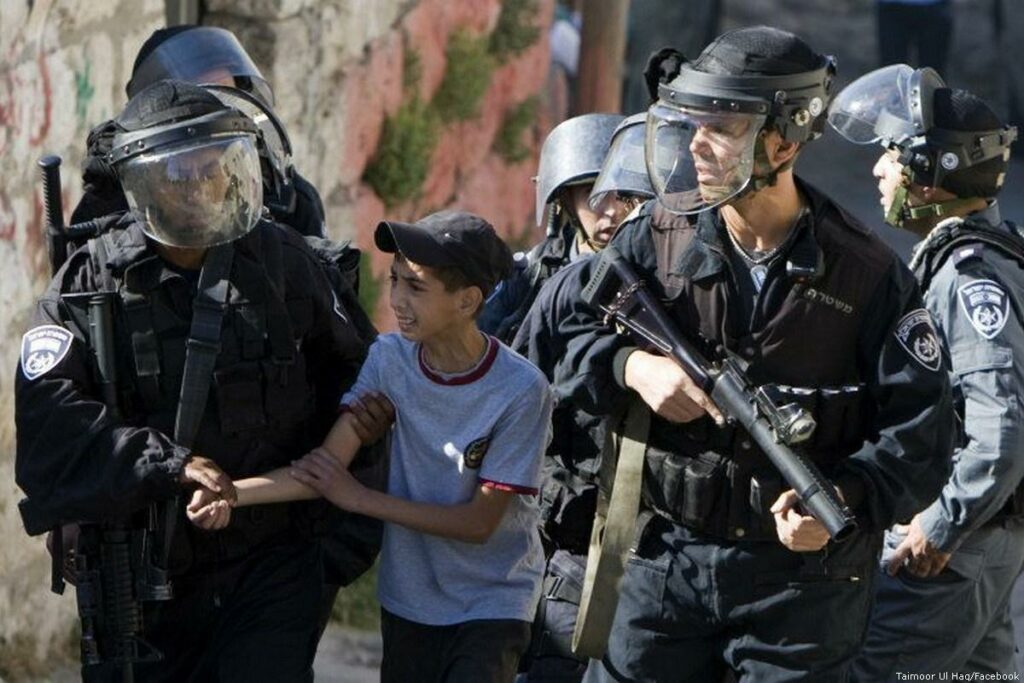 The then 13-year-old boy was tried and indicted in Israeli military court for allegedly stabbing and wounding two Israelis near the illegal Jewish settlement of Pisgat Ze’ev in Occupied Jerusalem in 2015. Manasra’s cousin, Hassan, 15, was killed on the spot, while the wounded Ahmad was tried in court as an adult. It was Barghouth who challenged and denounced the Israeli court for the harsh interrogation and for secretly filming the wounded child as he was tied to his hospital bed.

On August 2, 2016, Israel passed a law that allowsthe authorities to “imprison a minor convicted of serious crimes such as murder, attempted murder or manslaughter even if he or she is under the age of 14.” The law was crafted conveniently to deal with cases like that of Ahmad Manasra, who was sentenced on November 7, the same year, three months after the law was approved, to 12 years in prison.

Manasra’s case, the leaked videos of his abuse by Israeli interrogators and his harsh sentence placed more international focus on the plight of Palestinian children in the Israeli military court system. “Israeli interrogators are seen relying on verbal abuse, intimidation and threats to apparently inflict mental suffering for the purpose of obtaining a confession,” attorney and international advocacy officer at Defence for Children — Palestine, Brad Parker, said at the time.

The UN Convention on the Rights of the Child, of which Israel has been a signatory since 1991, “prohibits torture and other cruel, inhuman or degrading treatment or punishment.” Yet, explains Parker, “Ill-treatment and torture of Palestinian children arrested by Israeli military and police is widespread and systematic.”

So systematic, in fact, that videos and reports of arresting very young Palestinian children are almost a staple on social media platforms concerned with Palestine and Palestinian rights.

The sad reality is that Muhammad Elayyan, 4, and Qais Obaid, 6, and many children like them, have become a target of Israeli soldiers and Jewish settlers throughout the Occupied Palestinian Territories. This horrendous reality must not be tolerated by the international community.

Israeli crimes against Palestinian children must be confronted effectively for the simple reason that Israel, its inhumane laws and iniquitous military courts must not be allowed to continue their uncontested brutalization of those who are, at the end of the day, children. Israel’s war on their innocence must be stopped.

One Response to “Israel’s War on Innocence: Palestinian Children in Israeli Military Courts”