23 Aug 2019 – Wildfires are burning across the globe, clogging the sky with smoke from Alaska to the Amazon, and scientists say it’s no coincidence that July was the warmest-ever month recorded on Earth.

The fires have forced evacuations worldwide, most recently on Spain’s Canary Islands, where more than 8,000 people have been forced to flee. Smoke from some of the fires is so bad satellites can see it from space, blanketing large portions of South America and the Arctic.

Climate scientists say the fires are partly the result of a world growing warmer, making it easier for flames to spread.

“In these conditions, it is easier for wildfires to grow and to be more long-lived,” said Mark Parrington, a senior scientist in the Copernicus Atmosphere Monitoring Service at the European Centre for Medium-Range Weather Forecasts.

The average global temperature in July was 1.71 degrees F above the 20th-century average of 60.4 degrees, making it the hottest July in the 140-year record, according to scientists at NOAA’s National Centers for Environmental Information.

The previous hottest month on record was July 2016. Nine of the 10 hottest recorded Julys have occurred since 2005; the last five years have ranked as the five hottest. Last month was also the 43rd consecutive July and 415th consecutive month with above-average global temperatures.

Parrington said it’s not possible to draw direct connections between hotter weather and more wildfires, citing human activity. For instance, although there are big fires currently burning in the Amazon, the past 20 years have generally seen a reduction in forest fires there, he said. But now the fires are the worst they’ve been since at least 2010, based on initial data, he said.

Climate experts say there’s always going to be regional variations – the U.S. has had a below-average wildfire year following 2018’s deadly blazes across California – but the overall trend is toward more extreme weather fueled by a hotter climate.

The Arctic’s boreal forests are particularly at risk, said Rick Thoman, a climate specialist with the Fairbanks-based Alaska Center for Climate Assessment and Policy. Like Parrington, he said it’s not a simple connection between hotter weather and more fires, but said the conditions for fires are growing more frequent in the north.

“It’s a reinforcing loop: The more fires you have, the more land you open up, so in future years you’re going to warm that land more because the trees aren’t there to shade it, which will in turn melt permafrost, which will then release carbon and methane, which are greenhouse gases, which contribute to warmer summers and more fires,” Thoman said.

Multiple fires are burning near the state’s biggest city, and firefighters have called in assistance from the Lower 48. More than 400,000 acres are currently burning, and one of the biggest concerns is the McKinley Fire, which has destroyed at least 50 structures about 100 miles north of Anchorage. Officials with the Matanuska-Susitna Borough declared a state of emergency, and firefighters hoped that calmer weather predicted for Wednesday could permit evacuees to return.

Experts this spring predicted a long fire season in Alaska because the snow melted several weeks earlier than usual in many parts of the state.

Alaska has had a sweltering summer. July was the state’s hottest month ever, and the long-smoldering Swan Lake Fire roared back up over last weekend, clogging the area with smoke and forcing officials to use pilot cars to lead vehicles through the smoky area on the Kenai Peninsula. Lightning sparked the 138,479-acre fire in June, officials said, and there’s little chance of it being put out until heavy fall rains arrive. 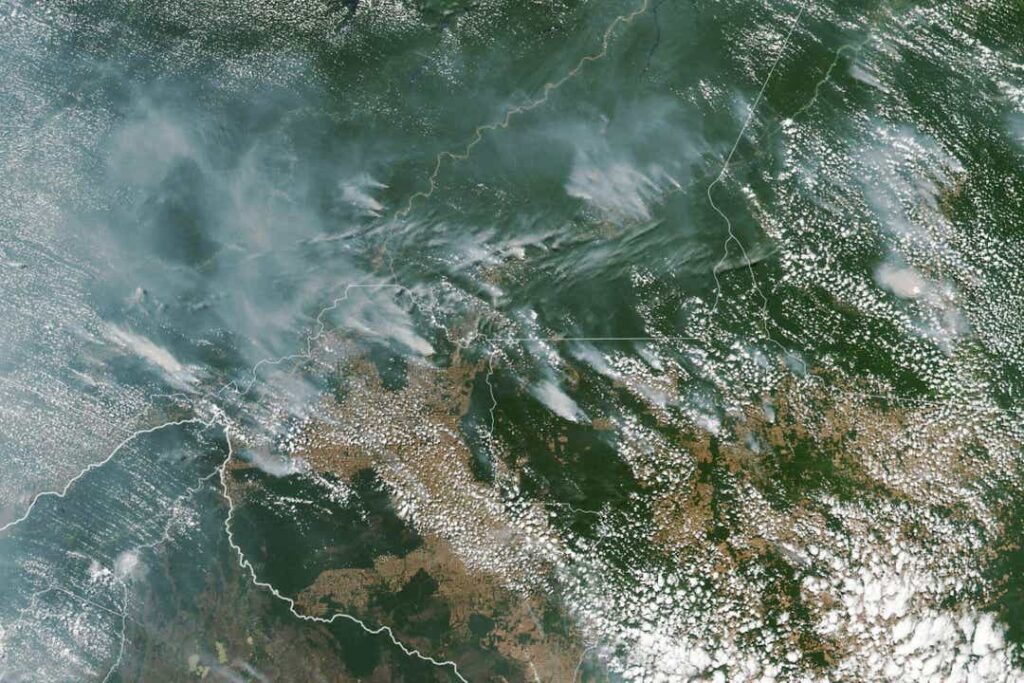 A handout photo made available by NASA of a satellite image showing several fires burning in the Brazilian states of Amazonas (top C-L), Para (top R), Mato Grosso (bottom R) and Rondonia (bottom C), 13 August 2019 (issued 21 August 2019). In picture at bottom left is seen Bolivia. In the Amazon region, fires are rare for much of the year because wet weather prevents them from starting and spreading. However, in July and August, activity typically increases due to the arrival of the dry season. Many people use fire to maintain farmland and pastures or to clear land for other purposes. NASA EARTH OBSERVATORY HANDOUT, EPA-EFE

AMAZON: Forest fires are generating smoke that can be seen from space

The sky above São Paulo turned black Monday as wildfires raging more than 1,000 miles away sent smoke pouring over Brazil’s largest city. The smoke resulting from some of these wildfires was also captured in satellite images released by NASA last week.

“The smoke did not come from fires from the state of São Paulo, but from very dense and wide fires that have been going on for several days in Rondônia and Bolivia. The cold front changed the direction of the winds and transported this smoke to São Paulo,” Josélia Pegorim, Climatempo meteorologist, told Globo. 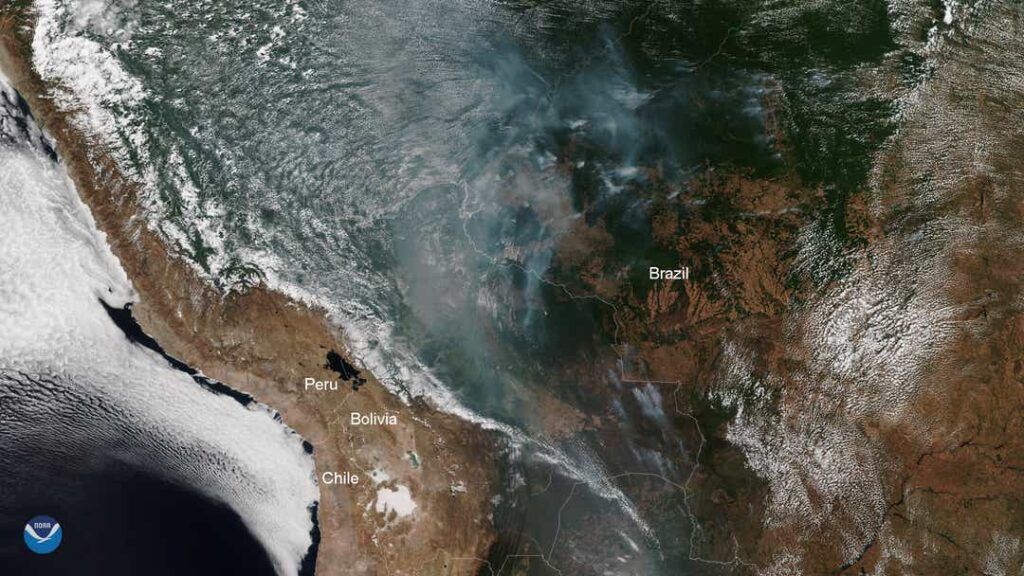 This true-color image was captured by the VIIRS sensor onboard NOAA-20, which provides daily, high-resolution visible and infrared images of Earth’s atmosphere from across the globe. In this image, taken by NOAA-20, the smoke from these fires can be clearly seen. NOAA

U.S. scientists say the Amazonian rain forest is typically resistant to fire, but climate changes have left it drier than usual. And while this is the time of year when farmers often set fires in the area to clear off areas for agriculture, Reuters reported the Amazon rain forest has experienced a record number of fires this year, citing new data released by the country’s space agency, the National Institute for Space Research (INPE). The agency said its satellite data detected more than 72,000 fires since January, an 83% increase over the same period of 2018. 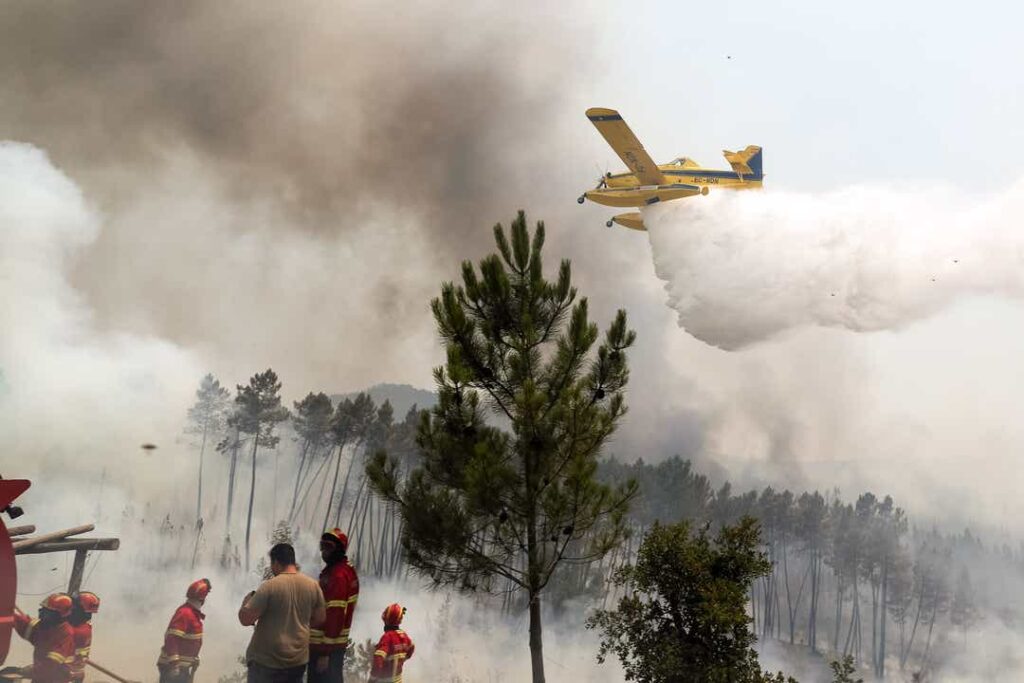 Firefighters and an airplane try to extinguish a wildfire at Sarnadas, near Macao, Portugal on July 21, 2019. According to reports, hundreds of firefighters, vehicles and planes are fighting at least three wildfires that broke out across central Portugal on July 20 and spread by strong wind. Paulo Novais, EPA-EFE

A raging wildfire forced large-scale evacuations of residents this week on Gran Canaria, a mountainous volcanic island off northwest Africa. Authorities said the fire burning in forested areas was generating flames up to 160 feet tall in the area of Tamadaba Natural Park, and about 8,000 people had been evacuated. The island is popular with tourists, but officials said the resort areas were so far unaffected, although smoke was widely visible.

Gran Canaria emergency chief Frederico Grillo said recent blazes now are much worse – “nothing like those we used to have” – when families worked in the countryside and forests were kept more orderly, private news agency Europa Press reported.

The Arctic: Areas of normally snow-covered Greenland are burning

The Arctic as a whole has seen unusually high wildfire activity this summer, Parrington said, including areas such as Greenland that typically don’t see fires. One estimate found that the amount of carbon dioxide emitted from fires burning within the Arctic Circle in in June 2019 was greater than all of the CO2 released in the same month from 2010 through to 2018 put together.

While it isn’t uncommon for these areas to see wildfires, there is cause for concern now, Thomas Smith, an assistant professor in environmental geography at the London School of Economics, told USA TODAY last month.

“The magnitude is unprecedented in the 16-year satellite record,” Smith said. “The fires appear to be further north than usual, and some appear to have ignited peat soils.” Peat fires can smolder for months.