Separate state for persecuted community seen as concrete step toward resolving crisis, but some Rohingya disagree. 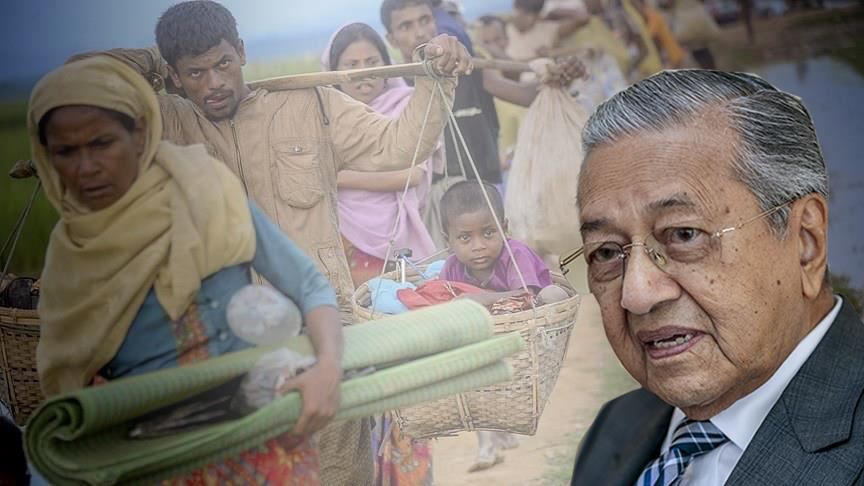 30 Jul 2019 – A recent proposal by Malaysian premier that the Rohingya ethnic minority should be given the chance to form their own state drew cautious reactions from members of the persecuted community.

“We are asking for our innate right of citizenship and ethnic rights,” said Hla Kyaw, head of the European Rohingya Council.

UN has described Rohingya as the world’s most persecuted people who have faced heightened fears of attack since hundreds were killed in communal violence in 2012.

More than 750,000 Rohingya refugees, mostly women, and children have fled Myanmar and crossed into Bangladesh after Myanmar forces launched a crackdown on the minority Muslim community in August 2017.

Malaysian Prime Minister Mahathir Mohamad on Friday in an exclusive interview with Anadolu Agency proposed a separate state for the Rohingya community to resolve the issue “if Myanmar does not recognize them as its citizens”.

“Myanmar, of course, at one time was made up of many different states. But the British decided to rule Myanmar as one state, and because of that, many of the tribes were included in the state of Burma. But now, of course, they should either be treated as nationals or they should be given their territory to form their own state,” said Mahathir.

He is the first head of any government to publicly break the taboo of proposing to give Rohingya a state of their own.

The proposal has generated mixed reactions among the Rohingya community and activists who are fighting to get the rights of Rohingya recognized by the Buddhist-majority country and seeking to return to their homes.

However, while meeting with some Hindu Rohingya families Sunday in Bangladesh’s Cox Bazaar — where nearly a million Rohingya are taking refuge after being forced out of their country — Myanmar’s Foreign Affairs Permanent Secretary Myint Thu told reporters that his country will consider Rohingya as “foreign nationals”.

Kyaw finds the statement as “genocidal”. “The minister is ignorant of the fact that the Rohingya belong to Myanmar ethnically and by citizenship for centuries,” he said.

Who is ready to mediate?

Imran Mohammed, a Rohingya activist based in Malaysia, echoed Kyaw as he was not impressed by Mahathir’s proposal.

“It really is not about being a separate [state],” he argued. “It is about living a life of equality and without discrimination,” Mohammed told Anadolu Agency from Kuala Lumpur.

He deplored the lack of sincerity and support from the international community.

“What options are we left with since the perpetrator of crime and genocide, Myanmar, does not listen to anyone?” he said, referring to Myint Thu’s statement.

According to Mohammed, the Rohingya have been facing this crisis for the last 70 years.

He also questioned the intentions of the government of Bangladesh, which houses nearly a million refugees, as Dhaka is desperate to send the Rohingya back.

The country’s Foreign Minister AK Abdul Momen said the Rohingya citizenship issue was an “internal affair of Myanmar“ as he sees the proposal of being “foreign nationals” as a “good sign”.

“What they are offering this is part to citizenship and it’s a good deal,” he tried to convince the persecuted community.

Mohammed mentioned that Bangladesh is “not ready for a conflict — be it political or armed — with Myanmar”.

“So who is going to play a vital role here and what options are we left with now?” he added.

“Mahathir knows our history very well. He made the statement on the base of deep historical evidences,” he told Anadolu Agency over phone.

“It can be done, and it has been done,” said Maung Zarni, a Burmese rights activist based in London, when asked about a separate state for Rohingya.

However, he added: “You can’t have a state without demarcated territories with international recognition.”

“But it usually involves military backing by a neighboring state or a coalition of states,” Zarni said referring to Bangladesh.

Pointing at India’s vital support — both militarily and politically — during Bangladesh’s war of independence against Pakistan in 1971, Zarni went on to say that New Delhi on the Rohingya issue “is siding with the genocide perpetrating coalition government of Aung San Suu Kyi and the Burmese military”.

“If Bangladesh and Malaysia are prepared to lead this effort to create a new state for Rohingya out of their ancestral homeland of Northern Arakan [Rakhine], then it is conceivable that Rohingya could have a chance to rebuild their communities on the soil from which they have been genocidally deported and exterminated,” said Zarni, who is coordinator of Free Rohingya Council.

But he expressed his pessimism about the idea: “I seriously doubt that either country is prepared to use their armed forces to end Myanmar’s genocide.”

Zarni, however, proposed that Malaysia and Myanmar take a non-militaristic approach toward resolving the problem.

“Both countries, either jointly or separately, can take Myanmar as a state party to the Genocide Convention, to the International Court of Justice [ICJ] for failing to honor obligations of the convention which it ratified in 1956,” he said.

Since Bangladesh and Malaysia are the two most affected states by the influx of Rohingya refugees, Zarni said “at the very least, the two countries can demand, say, $1 billion per year, for having to spend public money and resources to host these Rohingya refugees, until and unless Myanmar takes them all back — with full and equal instant citizenship.”

Nazmul Islam, a researcher at the Ankara-based Bosphorus Center for Asian Studies (BAAM), believes a safe zone for Rohingya rather than a separate state is more plausible.

“A safe zone for the Rohingya community in Myanmar, protected by a ‘UN peacekeeping mission’ as was suggested by the Bangladeshi government is also doable,” he told Anadolu Agency.

Islam highlighted that Turkey’s management role for Syrian refugees on its border with Syria can be “a good example to resolve the [Rohingya] crisis”.