The UN Resolution for the Culture of Peace

1 Aug 2019 – This summer and fall is seeing an increase in the number of international conferences dedicated to the culture of peace and basing their analysis on the Declaration and Program of Action for a Culture of Peace that was adopted 20 years ago by the UN General Assembly.

The UN resolution provides a holistic, positive view of peace. For each of the eight aspects of the culture of war, it proposes the alternative as described here. The resolution proposes specific actions to promote each of these eight program areas. And furthermore, it calls for a global movement for a culture of peace through partnerships between an among international, national and civil society organizations promoted through sysems of information exchange (such as the Culture of Peace News Network) on their initiatives.

The struggle for a culture of peace could gain much more force if this resolution were used as the basis for analysis and practice by more organizations around the world, but unfortunately it is relatively unknown.

The situation reminds me of the use of another landmark UN document, the Universal Declaration of Human Rights (UNDHR).

The adoption of the UNDHR by the UN General Assembly in 1948 did not immediately yield results. For the first 40 years the document sat on the shelf and was rarely mentioned, as shown in the following graph which shows the citations of human rights in academic publications as monitored by the Science Citation Index. It has only in recent years that references have exploded into thousands of times per year. 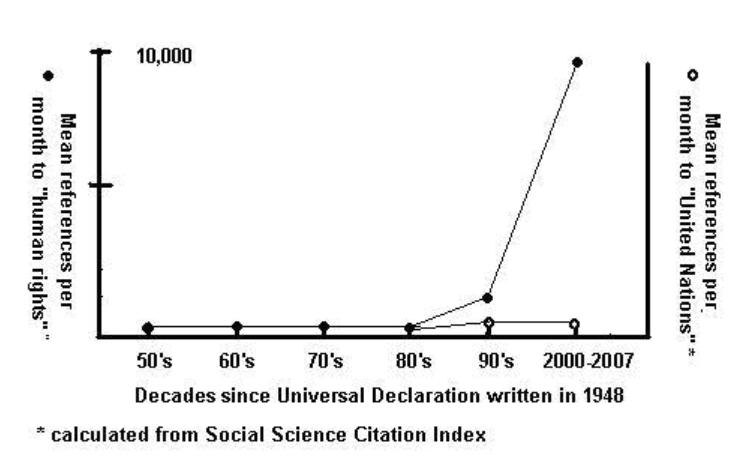 Now over 70 years after its adoption, the Universal Declaration of Human Rights has been taken up by thousands of other organizations and struggles in all social movements as a powerful tool for justice.

We may assume that the increased attention to human rights after the 1970s was largely due to the Nobel Peace Prize of 1977 to Amnesty International because of their efforts for human rights.

Hopefully, we will not have to wait another 20 years for such effective use of the Declaration and Programme of Action on a Culture of Peace. The work for culture of peace has been nominated for the Nobel Peace Prize in recent years, and if it were to be recognized by the Prize, that could help produce the kind of universal recognition and historical impact as that of the UNDHR.