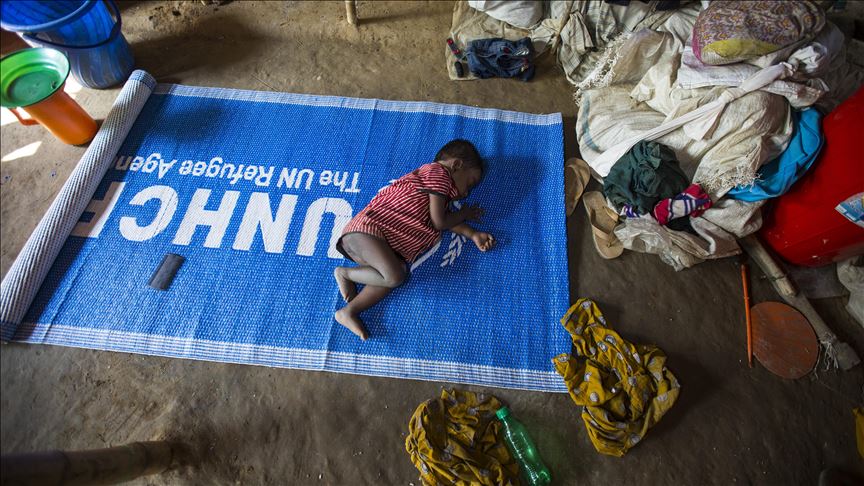 A kid sleeps on a United Nations High Commissioner for Refugees (UNHFR) mat on floor at a refugee camp in Cox’s Bazar, Bangladesh in December, 2017.
Mustafa Kamacı – Anadolu Agency

25 Aug 2019 – Today, Rohingya communities and their international supporters commemorate the 2nd anniversary of what is widely acknowledged as a textbook genocide commissioned by the UN member state of Myanmar, not simply by a few bad apples amongst the leaders of my country’s Tatmadaw or armed force who continue to shield their mass-criminal rank and file troops with a blanket impunity.

Those of us, grassroots human rights defenders, engaged legal scholars and genocide experts from about 12 countries have joined Professor Lee in building a grassroots movement to end Myanmar’s ongoing genocide and help realize Rohingya’s dream of justice, truth and international accountability.

As a scholar and activist, during the last 10 years I have been extremely pained by what I discovered to be our genocidal crime which both the state and the predominantly Buddhist society have been committing against the most vulnerable community of Rohingya. I blew the whistle on my own country’s “Buddhist” genocide with the three-year-long study which I conducted with my colleague and partner Natalie Brinham six years ago, at a time when using the “G-word” was sure fire way to destroy one’s own intellectual and professional credibility.

I stuck to what I found, despite denunciations and dismissal coming from even the leading circles of human rights documenters including Human Rights Watch and Amnesty International, not to mention genocide-averse diplomats and policy wonks.

While I do not have the power to end my Buddhist country’s genocide or hold any perpetrators or perpetrating Myanmar as a state party to the Genocide Convention, I do have the power to spread the word that my country is committing genocide against an innocent, vulnerable Muslim community. And I have the power as an honest Buddhist to say “sorry” to the Rohingya community – for the heinous crimes which they have been subjected to during the last 40 years.

I am not alone.

I know that there are other truthful and compassionate Burmese activists who want to apologize to the Rohingya and want to stand up openly in support of Rohingya’s right to belong in Myanmar – as full and equal citizens, just like any other ethnic nationalities.

Despite all irrefutable evidence to the contrary, the overwhelming majority of my fellow Burmese of all non-Rohingya backgrounds have fallen prey to the 40-year official propaganda of Myanmar crafted against the targeted Rohingya ethnic group.

We, Myanmar Buddhists and other non-Rohingya communities are, without a doubt, implicated in this crime of all crimes as unwilling or willing executioners partaking in the heinous acts, literally or through our acts of genocide cheer-leading, popular denial of both Rohingya group identity as an integral ethnic nationality of the Union of Myanmar and the government-orchestrated policies of persecution and collective destruction against these “Myanmar’s Jews”.

The manufactured hate-soaked climate within Myanmar makes it exceedingly risky for other human rights defenders — for instance, the White Rose campaigners who went around mosques in Rangoon, Mandalay and other cities during Muslims’ Holy Month of Ramadan — inside the country to openly stand with Rohingya. The White Rose-ers draw their inspiration from the peaceful anti-Nazi resistance group from Bavaria, Hitler’s stronghold.

All genocides are no crimes of passion, and as such they do not simply erupt violently in a sudden fashion out of nowhere. Beyond the standard, narrow definition of the convention, genocides are a long process of intentional destruction of groups with distinct collective identities from their very economic, cultural, social, physical, institutional, communal foundations. Rohingya have suffered a similarly systematic destruction as the Jews and other group victims such as Sintis and Romas throughout the Nazi-occupied Europe.

Myanmar’s genocide began with the military’s racially and religiously motivated attempt to re-engineer the predominantly Muslim character of Northern Rakhine State of Western Myanmar where there existed 70% Rohingya population. My late mentor Robert L. Koehl called the Nazi SS corps, who executed Hitler’s genocidal project, “social engineers”. Koehl was a US military intelligence officer and German-English interpreter posted to Germany during the WWII, where he came to specialize in Himmler and SS. Like the Holocaust which culminated with one million deaths in a single concentration camp of Auschwitz, Myanmar military’s demographic engineering of N. Rakhine ended with the “security clearance operations” — with the almost total destruction of Rohingya as a group. Today only about 400,000 left standing in Myanmar.

When societies reach a low point where public partake, literally and psychologically, in such premeditated, state-sponsored destruction of targeted groups, be they Jews, Bosniaks, Rwandan Tutsi, or Bengali, the world ought to intervene. For no genocides have ever ended through legal activism or economic boycott. No real justice can be done, unless perpetrators are captured and/or their regime crushed militarily.

The chances are slim in terms of any effective intervention to end Myanmar genocide or to effectively hold to account Myanmar both as a UN member state and individual perpetrating leaders, including Senior General Min Aung Hlaing and his partner in crime Aung San Suu Kyi.

Much as I wish for the restoration of Rohingya’s full-citizenship with all the basic rights as the rest of Myanmar’s ethnic nationalities, I fear that without the UN and external intervention Rohingya will remain the most persecuted and vulnerable population existing in sub-human conditions in the camps in Bangladesh, in detention centers in India, Saudi Arabia and as stateless people in Malaysia, Thailand and Indonesia.

Alas, a classic Catch-22. The world has failed again – this time the Rohingya are paying the price, with no light at the end of the tunnel.

No wonder then that the staff lady at the Nazi Concentration camp museum at Dachau last Christmas, who sold me a “Never Again!” pin, and said: “the world never learn” (from the Nazi Genocide).