Tulsi Gabbard Has Done the Unpardonable: Criticized US Global Hegemony 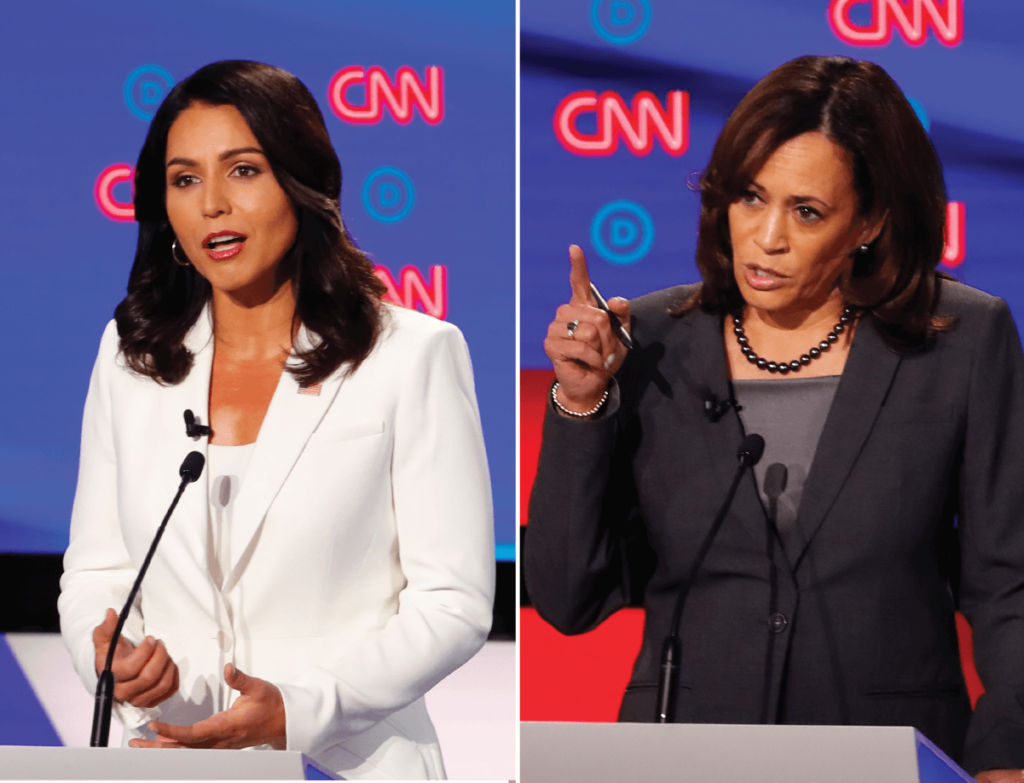 Side by side images of Tulsi Gabbard and Kamala Harris at July 31 debate in Detroit.  AP images.

3 Aug 2019 – The Times full spread hit piece on Tulsi Gabbard is a new low, even for the Times. It is yellow journalism half disguised as human interest, with a few random points of political information.

Headline: “Unorthodox Campaign Shows Isolationism May Have a Hold.”

Opening sentence: “Tulsi Gabbard is running for president of a country that she believes has wrought horror on the world.”

Their initial strategy was simply to starve her out – no coverage, no candidacy. Now, because she’s still in and lately told a truth that weakened the Times choice Kamala Harris, they are giving her the Bernie 2016 treatment: i.e. this candidate is outlandish, absurd, unaccountably heartless (her sister fell off a horse while the story was being written and her reaction was lacking in warmth), mystical (she spoke at a solar panel dedication event), a tool of the wicked (she points out that Syria never went to war against the US) – and possibly a Russian agent.

Among Times readers, fewer than one in 50 is likely to be a supporter of Gabbard, but turning off voters is the secondary purpose of such an article. The primary purpose is to shape attitudes at CNN, MSNBC, CBS, NBC, ABC, NPR, the Washington Post, and the Times sister publication The New Yorker. Legitimize flat-out condescension and contempt in the influential outlets and you keep her numbers down, since people won’t hear her voice at all.

A war veteran, an experienced and respected lawmaker, and a woman of color, but she commits the unpardonable error of criticizing worldwide US hegemony and so they follow the corporate reflex: make her a laughingstock.

Postscript. Gabbard stands up to an MSNBC hack who tries to overwhelm her with pro-war talking points. MSNBC is part of the perpetual war machine, as is the Times; they backed the Iraq war, and they’ll do the same for the next war, whether it’s in North Africa, east Asia, or Ukraine.

David Bromwich’s latest book is American Breakdown: The Trump Years and How They Befell Us. He teaches literature at Yale and is a frequent contributor to the Huffington Post and has written on politics and culture for The New Republic, The Nation, The New York Review of Books, and other magazines. He is editor of Edmund Burke’s selected writings On Empire, Liberty, and Reform and co-editor of the Yale University Press edition of On Liberty.