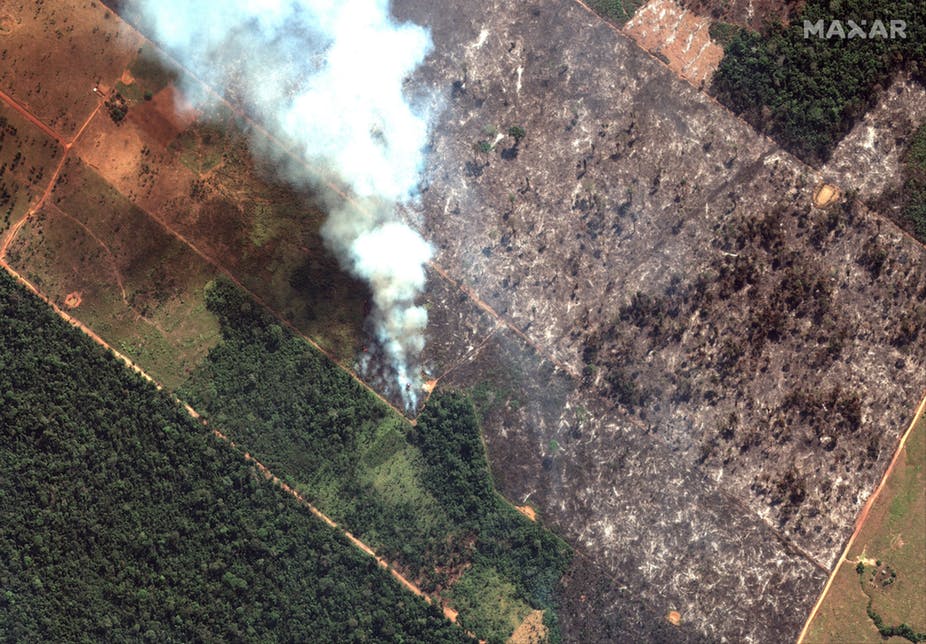 29 Aug 2019 – While Emmanuel Macron’s gesture of support at the G7 meeting in Biarritz to fight forest fires in the Brazilian Amazon was well-intentioned, it was also clumsy.

By suggesting that the fate of Brazil’s Amazon rainforest should be decided by the G7, and by offering such a small amount of assistance – US$22m to a government that takes in more than US$600 billion per year in revenue – the French president left himself open to criticism from his Brazilian counterpart that he had a colonialist mentality.

Jair Bolsonaro initially rejected the offer of assistance, before his spokesperson backtracked, though it remains unclear whether Brazil would accept the cash and under what conditions.

Despite the apparent simplicity of the stand-off – an environmentalist French president clashing with an anti-globalist Brazilian president brandishing a shield of national sovereignty – the politics in Brazil around the environment are complicated.

Bolsonaro’s criticism of Macron is just part of a long series of attacks by the Brazilian president on the country’s environmental infrastructure and its international partners.

In early August, Bolsonaro fired Ricardo Galvão, director of the National Space Research Institute, for releasing data that showed an increase in deforestation. When Norway suspended a planned contribution to the Amazon Fund, established to promote sustainable development, Bolsonaro criticised the country for hunting whales. And at the height of the recent concern about fires in the Amazon, he suggested that members of NGOs might be setting the fires out of spite for having their funding reduced. 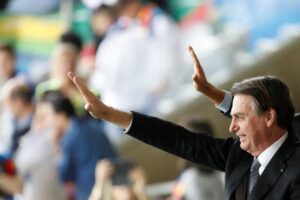 These and other comments unleashed a backlash at home, from both the opposition and key members of Bolsonaro’s own coalition. On May 8, a group of seven former ministers of the environment issued a letter condemning the government’s weakening of environmental protections. They pointed to the shift away from the positive trend between 2004 to 2012, when the rate of deforestation in the Brazilian Amazon fell by over 80%.

On August 23 and 24, thousands of people in various Brazilian cities reacted to photos of the Amazon fires by protesting against the government’s policies and in defence of the rainforest.

All this comes as Bolsonaro’s wider approval ratings have slipped, with recent surveys showing just how strongly his government divides public opinion. A CNT/MDA poll conducted in late August showed that 39.5% of those interviewed thought the government was bad or terrible, compared to 29.4% who thought it was good or very good.

A survey by Ipespe for XPi released on August 9 found that 55% of those polled agreed that: “The polemical statements by Jair Bolsonaro in the past month were inadequate.” And when it came to the environment, a poll conducted by IBOPE in mid-August found that 96% of those interviewed agreed that Bolsonaro and the federal government should do more to prevent illegal deforestation in the Amazon.

Despite these mixed opinions, Bolsonaro’s denunciation of the French president’s colonial attitude seemed to garner support among his base, in part because the defence of sovereignty is popular in Brazil across the ideological spectrum. 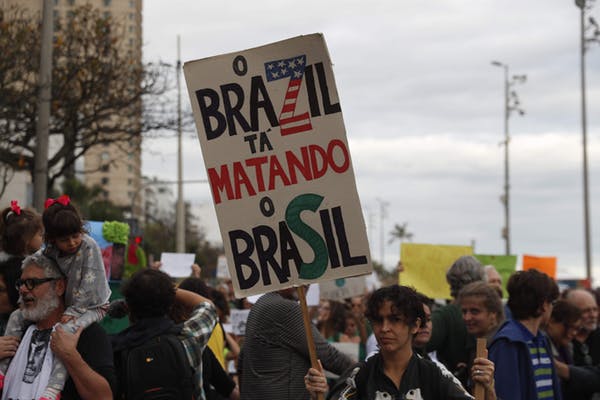 Yet politicians in parties that support Bolsonaro’s government also registered their dissent over the fires. On August 24, members of the pro-government Partido Novo requested that the party expel Ricardo Salles, the environment minister, complaining among other things that he didn’t represent the policies of the party in office and had ignored scientific evidence. However, it’s unlikely the Partido Novo will agree to the request.

On August 27, in a meeting between Bolsonaro and the nine governors of the Amazonian states, only two of whom are from opposition parties, the governors urged the president to accept the money offered by the G7, pointing out that they faced a fiscal crisis.

It doesn’t help Bolsonaro that Brazil’s economy remains sluggish, with growth projected at 0.8% in 2019 and unemployment hovering around 12%.

Perhaps most significantly for the government, representatives of Brazil’s powerful agribusiness sector weighed into the debate. In mid-August, the business newspaper Valor Econômico published interviews with Blairo Maggi, one of Brazil’s biggest soy exporters, and Marcello Brito, president of the Brazilian Agribusiness Association, in which they complained that Brazil’s image as a deforester places agribusiness exports at risk.

Maggi and Brito know how much is at stake. In the first seven months of 2019, 17.7% of Brazil’s agribusiness exports, worth US$1 billion, went to the EU. Those exports might be vulnerable to boycotts.

And all this comes a few months after the EU signed a trade agreement with Mercosur, the economic bloc composed of Argentina, Brazil, Paraguay and Uruguay, that took 20 years to negotiate. The deal still has to be ratified, and both Macron and the Irish prime minister, Leo Varadkar, said that they would vote against ratification unless Brazil does more to curb deforestation in the Amazon.

Brazil is not unified around Bolsonaro, and there is no majority pushing to defy the global environmental consensus by prioritising predatory economic development over conservation in the Amazon. Bolsonaro has immobilised the government’s environmental infrastructure, but he has not completely destroyed it, and with the right incentives it could be revitalised.

The government’s decision to send troops to the Amazon to help fight fires at least shows commitment to curb illegal deforestation. Important elements of the government’s own support base – not just the opposition – have embraced the idea of sustainable development and would like their president to dial down his anti-environmental rhetoric.