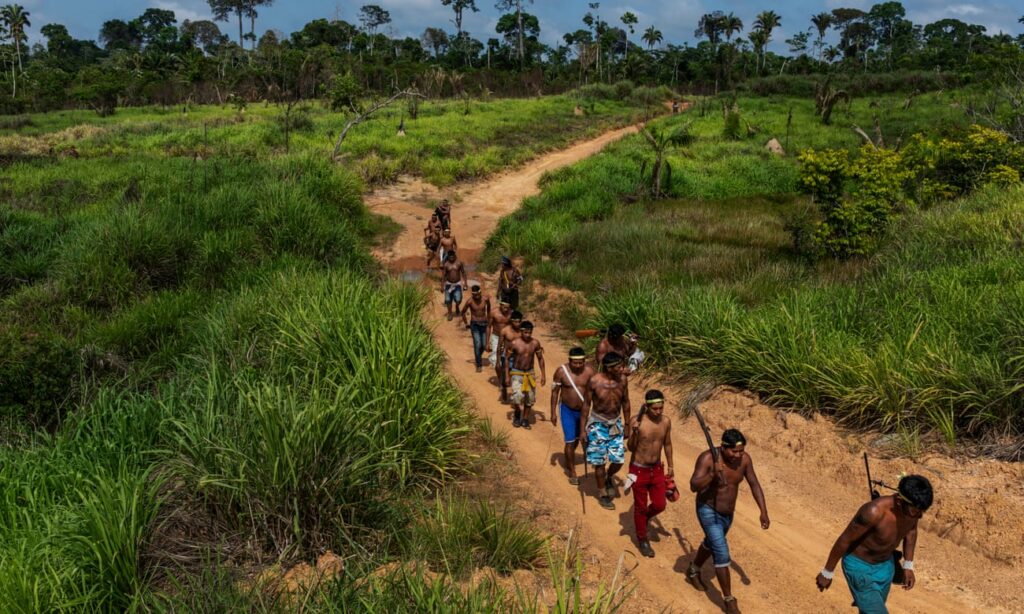 29 Aug 2019 – Threatened by fire, deforestation and invasion, the Xikrin people of the northern Amazon are fighting back.

While the authorities stand idle and the Brazilian president, Jair Bolsonaro, tries to undermine their territorial rights, the indigenous community have taken matters into their own hands by expelling the loggers and ranchers who illegally occupied their land and set fire to the forest.

Armed with rifles and wooden batons, groups of Xikrin warriors have swept through their extensive territory in the state of Pará over the past week. Whenever they encountered fire-scarred land, illegal clearances and habitations, they went from hut to hut, ejecting the invaders and confiscating chainsaws and other tools.

At the end of the 40km expedition, the warriors felt empowered. In a war ritual, they marched back to their homes in Rapkô village. As their families gathered round, they showed mobile phone clips of the raid they had conducted on the intruders’ huts.

“Why are we protecting our land? So we can hunt. So our sons and grandsons can live well on this land,” said Tikiri Xikrin, one of the oldest warriors, during a ceremony to mark the group’s safe return. “Only if I die will the kuben [white people] occupy the land.”

By law, this ought to be the task of the federal police. The 1,651,000-hectare Trincheira Bacajá indigenous territory was officially recognised by the government in 2000. Nobody but the 1,100 members of the Xikrin community has the right to live on it.

But the elders know there is scant hope that the government will enforce their rights. The land-grabbers first started to creep into the area in June last year, using a rough road that had been cut into the forest by illegal loggers. The Xikrin filed complaints to official agencies several times, but to no avail. 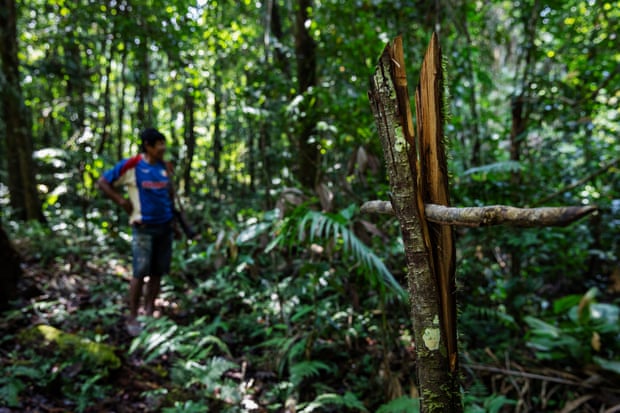 Last month, the slow trickle of deforestation became a flood across the Amazon, with a 278% increase over the same time last year. One of the worst-affected areas was the supposedly protected land of the Xikrin. In July, land-grabbers razed an area of pristine forest the size of 1,500 football pitches in their territory, according to the independent monitoring group Imazon.

The problems have a long history, but Bolsonaro has made things worse. Instead of defending the territories from crime, critics say he repeatedly undermines indigenous residents in his speeches and through his policies. During a meeting with Amazon region state governors on 27 August, the nationalist president alleged native communities have been used by foreign interests to limit Brazil’s growth.

“[Indigenous peoples] don’t speak our language, but they have somehow managed to get 14% of our national territory,” Bolsonaro said recently, adding: “One of the purposes of this is to impair us.”

Bekara Xikrin, the chief of Rapkô village, said the land-grabbers had been encouraged by the president. “One guy [among the invaders] told us the land is freely accessible, that Bolsonaro granted access to it, that this is not indigenous land.”

The invader claimed he wanted to help the indigenous community to work their land. Bekara gave him short shrift. “I told him: this indigenous person doesn’t want help, the old warriors don’t want help. Deforestation is not allowed here,” he said.

The Xikrin’s self-defence actions have not scared off the land-grabbers. In an audio message circulated by WhatsApp, one of them warned that close to 300 people were preparing an attack against a nearby indigenous village.

To prevent violence, the federal prosecutor for the region, Thais Santi, formally requested action by the police on 26 August. She said an operation should be carried out within 24 hours, but two days later nothing had happened.

“The Trincheira Bacajá case involves widescale negligence by the government,” Santi said. “The Xikrin registered a complaint against the occupation of their land. Because the police failed to act in time, the invasion spread.” 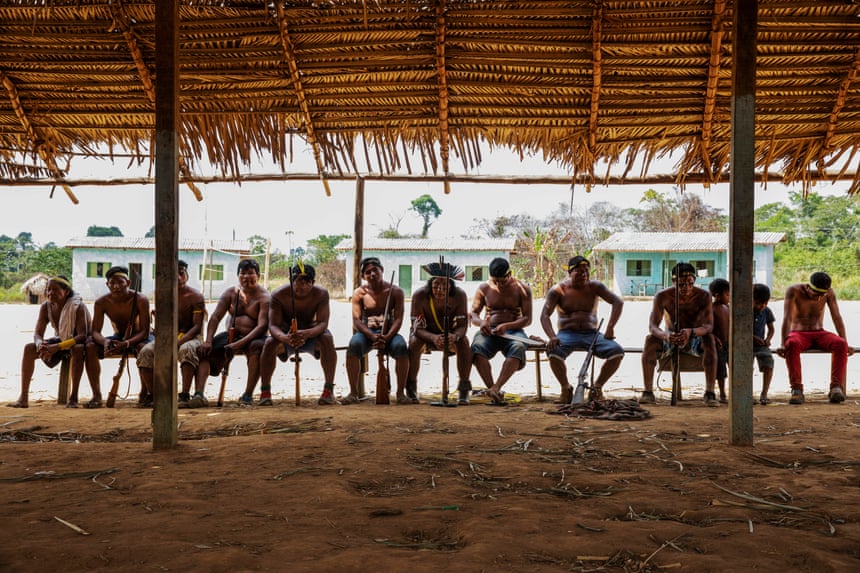 Many other indigenous lands in the Xingu river region are under similar pressure. This basin – one of the biggest in the Amazon – has been opened up by the Belo Monte hydroelectric dam, which brought an influx of business people and labourers. The municipality around the main city of Altamira now ranks first in Brazil for fire outbreaks.

From 1 January to 26 August, the municipality experienced 2,566 blazes, an increase of 459% over the same period last year, according to Brazil’s national space research institute, Inpe.

Neighbouring the Trincheira is the Apyterewa indigenous territory of the Parakanã people, which has suffered a huge invasion by cattle ranchers. In July, 28 sq km were deforested in this area – the largest inside a Brazilian indigenous territory that month, according to Imazon.

Apyterewa illustrates how the federal government’s inaction predates Bolsonaro. In 2015, the federal supreme court (STF) ordered the eviction of hundreds of invaders but, four years later, the ruling has not been enforced. In fact, the number of land-grabbers has increased.

In the same region, Ituna/Itatá indigenous territory lost 9 sq km of forest last month. These three indigenous lands are the worst affected in Brazil in recent weeks, according to Imazon. 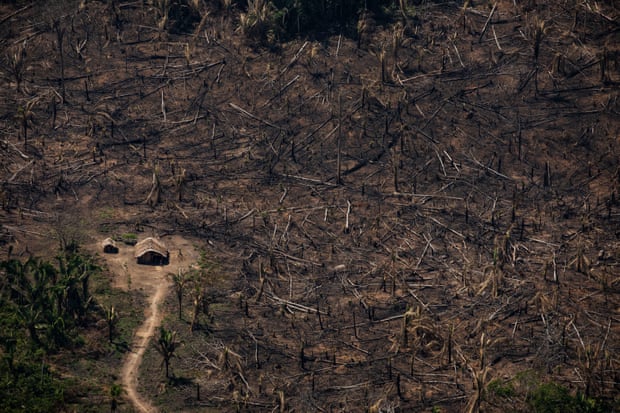 Pressure against the Xikrin comes mostly from livestock farming. The cattle ranching industry is staunchly in support of Bolsonaro. Not far from their territory is São Félix do Xingu, the municipality with the largest cattle herd in the country, numbering 2.24 million in 2017. There is nowhere in the Amazon with more degraded pasture – 286,000 hectares, according to 2014 figures from the agricultural and livestock research agency. “This indicates that a large area has been deforested and is now misused,” says researcher Paulo Barreto of Imazon.

The Xikrin are now fighting to prevent their territory from suffering the same fate. The warriors say they are proud of what they have done to defend it, though the initial sense of jubilation has been replaced by a sombre realisation that they may now face a counter-attack.

Holding a sickle in his hands, Tikiri Xikrin was defiant: “I am not afraid of the white invaders. I have courage. We have courage. If the kuben start a conflict, we will fight.”