Exile from Exarchia: An Anarchist Enclave in Athens Opened Its Doors to Refugees

Until the Authorities Had Enough 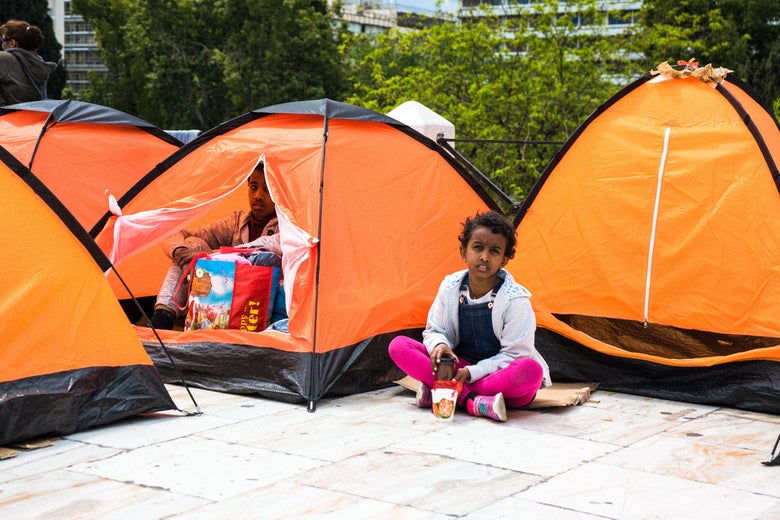 22 Aug 2019 – When Alireza, a 26-year-old Iranian fleeing political troubles, arrived in Athens, Greece, in August 2018, he had nowhere to go. For the first three weeks, he slept in parks. During the daytime, he went to the refugee camps that have sprung up in Greece over the past decade and asked if they had accommodation.

“They said, ‘No, we are full. We can’t do anything. You can register—please write your name. We will call you,’ ” he recalls. “Nearly a year later they haven’t called me yet. The refugee system is a complete joke.”

A few years earlier, Alireza might have rolled up his sleeping bag and joined the hundreds of thousands trekking north to western Europe. But by 2018, Greece’s northern borders were closed, and beyond that was a gamut of successive Balkan police forces. Asylum-seekers were said to be beaten brutally if caught. Alireza tried to fly to Germany on a fake passport but was caught at the airport. “They detained me and sent me to a detention center for 76 days without any sunlight,” he says.

In the detention center, his fingerprints were taken, a life-defining moment, because under European Union law, asylum-seekers are required to apply for asylum in the first country they officially enter and will be returned there if they try to apply elsewhere. So he decided to apply for asylum in Greece, and was released while his claim was considered. But he was still homeless. Then he heard about Clandestina.

When refugees started arriving on Greek shores in large numbers, the anarchists opened their doors.

As the capital city on the edge of the Mediterranean, Athens became a refugee city almost by default. But the real sanctuary is the city-within-a-city, a neighborhood known as Exarchia. Its outlaw status dates back to 1973, when the ruling military junta brutally put down a student protest in the university located there, killing 40 civilians. The democratic regime that followed tried to avoid a repeat by banning police from campuses—which made the surrounding area attractive to those suspicious of the state. In the following years, for the most part, police largely left it alone. It is run, instead, by anarchists (and, it is whispered, drug dealers and Mafia). To the visitor, however, it is surprisingly easy to wander into. Ignore the anarchist graffiti, and the odd crumbling ruin, and it could just be another scruffy neighborhood in downtown Athens where hipsters drink cheap beer and dine in trendy restaurants.

When refugees started arriving on Greek shores in large numbers, the anarchists opened their doors. Clandestina, an empty government building that had already been home to squatters, was turned into refugee accommodation by a small anarchist group formed of Greeks, Danes, and refugees. It was six stories high, according to Alireza, and housed about 100 people, mostly Iranians and Afghans. There were rooms for families, and dorms for single men and women. The building was managed in an efficient, if gender-stereotypical, fashion—the women took turns to cook communal meals, and the men did shifts on security. A nominated agent called NGOs to request supplies.

Alireza’s experience was not unusual. “When someone first comes, they’re basically left to go around the organizations and see where they can live, and often the answer is ‘the squat,’ ” says a European volunteer in Athens, who asked to remain anonymous. In 2017, Athens’ mayor estimated that between 2,500 and 3,000 refugees and migrants were being housed in squats. A UNICEF study put the number in Exarchia as 1,199. In addition to Clandestina, other well-known squats included the former City Plaza Hotel. The biggest squats house 250 to 300 people, generally Kurds, Syrians, Iraqis, Afghans, and Iranians, with smaller numbers from West Africa and Bangladesh. The conditions are hardly glamorous—families are often forced to share rooms, and everyone has to share the toilets. But the homeless include families and pregnant women. “Most of the time, the alternative to the squat is the street,” the volunteer says.

Greek authorities don’t see it that way. In April 2019, evictions started. “About 5 o’clock in the morning, the police of Athens raided our squat while all of us were sleeping,” says Alireza. When residents asked the police where they could stay instead, he says they replied, “We don’t have any plan for you.”

The newly homeless residents decided to camp in Syntagma Square, a grand plaza in Athens facing the Greek Parliament. The sight of children living in tents was embarrassing enough for Greece’s left-wing government that after a few days of negotiation, the authorities offered them accommodation at Elaionas, an inner-city refugee camp. “Elaionas camp isn’t a good camp but it is called ‘the best camp,’ ” Aliraza notes wryly.

In July, though, a center-right government won power, on a platform that explicitly included “cleaning up” Exarchia. Activists say that two large squats were served eviction notices immediately after the election, and more evictions are planned for August. Laws restricting policing have been overturned. The government has also stopped issuing social security numbers to asylum-seekers, meaning that new arrivals will not be able to find work or health care.

Greek police have the right to ask anyone in public for his ID. But for many years, the absence of police from Exarchia meant undocumented people were relatively undisturbed. “It was the only place that you could be fairly guaranteed that no one’s going to come and ask you for your papers,” the European volunteer says.

Now, police are entering Exarchia. “This one year, I was only checked four times about my papers, one time in the last government and three times under the new government,” says Alireza. While his asylum process continues, he, at least, can produce them. Those without papers could end up in a detention center. The situation, says the European volunteer, is “pretty scary.”

As for the former residents of Clandestina, they remain close. Some have managed to cross the borders into mainland Europe. Others remain in the camp at Elaionas. “Now we have friends in the Netherlands, Germany, and France, and I believe we will be in touch until the end of our lives,” says Alireza. “Because in most awful time of our lives, we were together.”

Julia Rampen is the digital night editor of the Liverpool Echo and a former journalist at the New Statesman.