Gandhi the Organiser tells the extraordinary story of how Gandhi’s early campaigns of nonviolent direct action in India took the country by storm.

From the impact of these first dramatic, local and nationwide struggles, Gandhi, this most unlikely politician, became leader of the Indian national movement and utterly transformed its fortunes. At the climax in 1921-22, the British hold on India no longer seemed unbreakable, in the face of Gandhi’s carefully orchestrated withdrawal of popular support known as Noncooperation. 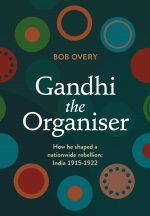 ​The book examines how this momentum was built up: how the aims of the campaigns were set, how they were organised and how the organisers prepared those involved to play their part. Gandhi is seen as a practical activist: an idealist fully engaged in the real world, seeking and finding ways of building alliances with colleagues, many of whom did not share his beliefs.

Gandhi the Organiser looks at how highly controversial campaigns of civil disobedience were matched with non-contentious campaigns of constructive work, to help to build self-reliance and pride in those who were active in the struggle, as well as in those who were not. It shows how the two types of campaign were intertwined in his strategic thinking, and how each provided
the other with essential support.

​News of the dramatic effectiveness of these (and later) campaigns, particularly the use of civil disobedience, spread all over the world, intriguing and inspiring radicals in many parts of the world. Activists and theorists in the west began to look at the possibilities for Gandhian nonviolence in their home contexts. However, over many decades, the study of nonviolence has shifted away from Gandhi.

​Gandhi the Organiser claims that the move away has gone too far. The book queries the attempt to strip nonviolent action of all, or most, Gandhian values – and of its supporting campaigns of constructive work. Today, as the need for strategies for organising nonviolent rebellion seems more and more evident, it is useful to see how the man generally credited as the greatest strategist of nonviolence we have yet seen, played his part in orchestrating the great first rebellion of India’s 20th century independence struggle.

“I am not going to take a single step… unless I am satisfied that the country is ready for that step.”  — Gandhi

“In this important book, Overy highlights aspects of Gandhian practice that have been largely overlooked or dismissed in contemporary accounts of nonviolence… Through careful analysis of key campaigns in the Indian movement, Overy illustrates how Gandhi’s philosophy and practice of nonviolent action evolved. Gandhi the Organizer will be of interest to activists and academics alike.”
— Sharon Erickson Nepstad  University of New Mexico, Albuquerque

“A substantial critique… In his detailed analysis of the protests that Gandhi led in India between 1915 and 1922, Overy shows how Gandhi was constantly adapting and changing his methods in reaction to changing political circumstances, thus bringing out the dynamism and sheer flexibility of Gandhi’s approach in a way that the nonviolent theorists fail to do.”
— David Hardiman University of Warwick

“Bob Overy gives us inspiring, incisive and well-articulated pathways for transforming Gandhi’s legacy into contemporary action, notably the interdependence between programmes of constructive work and satyagraha. Across the world, I am sure, practitioners and activists, especially for social and climate justice, will benefit.”
— Andy Rutherford Asia Europe People’s Forum

“This book is a unique contribution in two ways. Firstly, it puts the focus on the least understood element of the Indian anti-colonial liberation struggle, yet the one emphasized by Gandhi himself: the constructive program, or the building up of self-governed institutions and skills, enabling real autonomy from colonial rule and local empowerment of ordinary Indians. Secondly, it goes into the empirical detail of key campaigns of the liberation struggle, showing how the constructive work in a dynamic way connected with the resistance against British colonial rule.”
— Stellan Vinthagen University of Massachusetts, Amherst

“For the time being we have the ear of the masses because we voice their sentiments.”  — Gandhi

Introduction: What Gandhi Did

4 The Place of Constructive Programme
5 The Swadeshi Sabha

​“The country is moving so fast now that our leaders cannot keep pace with it.  We cannot afford to miss it.”  — Gandhi

“… in this book I will look not at Gandhi’s philosophy, but at how he applied his philosophy. It was as a more effective organiser than any of his contemporaries that Gandhi was able to capture the leadership of the Indian National Congress in 1920.”  From Introduction  What Gandhi Did

“Gandhi, in choosing the Rowlatt Bills as the first issue on which to organise an all-India satyagraha, selected an issue which united all nationalist opinion in outrage, as opposition to the constitutional reforms did not.”  From Chapter 3  Challenging the Raj

“Gandhi, faced with the reality of trying to organise and lead a nationwide confrontation with the British, requiring immense discipline and self-sacrifice, had switched the programme of noncooperation it its first stage to something closer to his own ideal prescription for Indian society.”  From Chapter 6  Muslim Outrage Against the Raj

“Thus Gandhi had been diverted from preparing for mass civil disobedience by the possibility of a round table conference that was no longer in prospect. Even so, he was becoming increasingly convinced that the overall campaign of Noncooperation needed to be reined in so as to maintain contact with moderate opinion, and so as to calm the atmosphere for the next stage of the struggle.…

The success of moves towards engaging the peasantry, including expectations of mass civil disobedience and swaraj, meant that as the movement grew and as local leaders gained in confidence, Gandhi and his co-workers were more remote from much of the activism generated, and less in control.”  From Chapter 9 Waiting for Mass Civil Disobedience

​“Faced with the problems we have indicated, Gandhi turned to a programme of constructive work almost as a panacea. Constructive work was designed to discipline the people prior to civil disobedience. It was to provide tasks some of which could be taken up by the poorest peasants and give them a place in the national movement. It was designed to provide a link between the national political elite and the peasantry and to take active nationalists out of the British Raj’s legislatures to the “real” politics of India, tackling poverty and injustice in the villages. It was used too not only as a preparation for civil disobedience but also as a delaying tactic. Until the targets were reached and the “capacity” of the nation demonstrated, civil disobedience could or should not be launched.

​Again, promotion of constructive work helped Gandhi deal with the problem of scale, moving from a local level where he could preserve face-to-face contact to a national level where he could not. If it was impossible to rely on inexperienced satyagraha leaders to launch civil resistance campaigns across the subcontinent, what he could do with much less risk was to invite them to introduce the nation to campaigns of constructive work.”  From Chapter 10 Gandhi’s Method in the West

​“Civil disobedience without the constructive programme is like a paralysed hand attempting to lift a spoon.”  — Gandhi

NOTE FROM THE AUTHOR

I became interested in Gandhi in the early 1960s while taking part in demonstrations against Britain’s nuclear weapons. Disillusioned with conventional politics and its failure to address the most important issue of the age, nuclear war, it made sense to me to challenge the state’s legitimacy
and to break some of its laws in public protests.

Substitute the imminent threat of nuclear war then with the unstoppable march of climate change today. My feelings then were probably not much different from many people today, those who feel their lives and the lives of future generations will be cut short if they don’t do something now to stop the madness.

Gandhi’s campaigns in India inspired some to bring his nonviolent methods of protest into British politics, with marches, vigils, obstruction of traffic and incursions into nuclear bases. By the time I joined in, one campaigning objective, taken up enthusiastically by me, was “Fill the Jails”. After refusing to pay fines for nonviolent protests I was jailed a few times, but noticed that the numbers following the same path were dwindling. That experience is one that has encouraged me to research and write this book.

Another has been the journey that the study of nonviolent direct action has taken in academia. Nonviolence is seen as a substitute for violence. In effect, the assumption is that nonviolent action can adapt to society as it is, rather then be part of a radical project to transform society. Nonviolence is rarely treated as a day-to-day tool to be used by all of us in our everyday undertakings. My intention in writing this book is to address this shift in approach, and to reconnect nonviolent action with the experience and thinking of its greatest practitioner, Gandhi.

Jørgen Johansen is a nonviolence author/activist, editor of Irene Publishing, and a member of the TRANSCEND Network from Norway.

Bob Overy is an independent researcher. A former anti-nuclear-weapons activist and peace journalist, also community worker and town planner, he did a PhD in Peace Studies at Bradford on Gandhi. He then worked as an emergency planning officer for a “nuclear free” local authority, later transferring to central government to advise on legislation that prepares for emergencies in peacetime. He is now retired.