Have You Noticed How Social Media Purges Always Align with the US Empire? 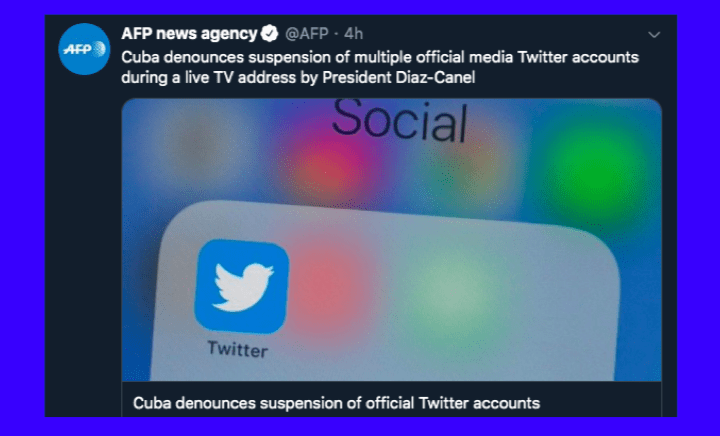 12 Sep 2019 – Twitter has suspended multiple large Cuban media accounts for reasons the social media platform has yet to explain as of this writing, a move which journalist Dan Cohen has described as “the equivalent of silencing CNN, Fox, WaPo and NPR’s accounts” for that nation. The Union of Cuban Journalists has denounced the move as censorship.

Last month we saw Twitter suspend hundreds of accounts which it claims originated in mainland China for engaging in “covert, manipulative behaviors” against the Hong Kong protests, with Facebook and Google/YouTube following suit in the creepy, uniform coordination we’ve come to expect between these social media giants. In June of this year Twitter removed thousands of accounts it claims were associated with the governments of Iran, Russia and Venezuela, as well as 130 accounts reportedly tied to the Catalan independence movement in Spain. In May Twitter removed 2,800 of what it claimed were “inauthentic accounts originating in Iran.” Earlier this year, Twitter and Facebook coordinated with each other to remove hundreds of accounts they claim were tied to “coordinated influence operations” in Iran, Russia, and Venezuela.

Twitter just suspended the accounts of the biggest media outlets in Cuba and has given no reason. This is the equivalent of silencing CNN, Fox, WaPo and NPR’s accounts, but Cuba is a target of the empire so these arbitrary suspensions don’t generate outrage. https://t.co/0fgEiX8bjL

If you’ve been paying any attention at all to the dynamics of empire, you will immediately recognize all of these purges as having targeted groups which are not aligned with the US-centralized power alliance. There have been no comparable mass social media purges of groups that are aligned with the US-centralized empire; a few accounts critical of Beijing were accidentally suspended from Twitter in June and replaced with a hasty apology, and a few Saudi bots were removed for defaming Jamal Khashoggi after his death, but that’s as close as you’ll find to any non-empire-aligned purge.

“But Caitlin!”, you may protest. “That’s because the US and its allies are free democracies which never engage in propaganda or coordinated influence operations. Those other governments that got their accounts purged are evil authoritarian regimes whose dishonest manipulations must be curtailed!”

And to you my hypothetical friend I say bull boogers. I can prove to you that propaganda and coordinated influence operations are at least as prevalent in the so-called free democracies of the western empire as they are in the so-called authoritarian regimes of unabsorbed nations, and I can do it without even looking up from the story I’m already reporting on.

See that hyperlink I put at the beginning of this essay when I first told you about the suspended Cuban media accounts? It links to an article that as of this writing is the only report in written English-language media on that story. The archived link says it’s from Yahoo News, but that’s actually just the outlet that picked it up; the story itself was from the news agency AFP, which is one of the mere three news agencies that are responsible for most of the news media reports in the western world.

This very AFP report claims that “Cuba is regularly criticized by watchdogs for exerting excessive control over the internet,” citing to substantiate this claim an organization called Freedom House, which the report describes only as “New York-based”. Freedom House, which self-brands as an “independent watchdog organization”, is in reality a narrative management firm that is funded by powerful plutocrats and has the bulk of projects paid for by the National Endowment for Democracy. The National Endowment for Democracy is funded directly by the US government, and was set up in 1983 to do overtly what the CIA had been doing covertly up until that point, namely effecting regime change in sovereign nations.

To put it another way, one of only three news agencies responsible for generating most western news media asked a US government-funded PR firm that was specifically created to make news-friendly propaganda which literally meddles in other countries’ governments to validate the claim that the news of a country that they target conducts propaganda, while omitting the fact that it is a propaganda organization.

This is Inception-level propaganda. This article, the only one available as of this writing to anyone who is interested in Twitter’s censorship of Cuban media outlets, is infinitely recursive, fractal, nesting doll-level propaganda, a pure coordinated influence operation, from top to bottom. And yet all the parties known to have been involved in crafting this piece of propaganda still have their Twitter accounts up, from Yahoo News, to AFP, to Freedom House, to the National Endowment for Democracy. Because the free democracies of the west do not engage in propaganda.

Again, that’s just literally the first example I reached for because of the story I happen to be writing about here. It’s one of endless possible examples, because it’s happening constantly.

We need to stop pretending FB & Twitter aren't arms of the US state. For over a year they've deleted accounts of Iranians, Venezuelans, Russians, & Chinese simply for daring to voice opinions different from the imperialist narrative, under the aegis of combating "disinformation." pic.twitter.com/bML58Ufpe0

Whenever I criticize these Silicon Valley tech giants for de-platforming voices which dissent from establishment narratives, I always get a deluge of pushback from establishment loyalists and capitalism cultists who insist that Twitter, Facebook and Google are private organizations who are free to do as they like with their personal property, and, since they are not government bodies, what they are doing cannot strictly be labeled censorship. But we see time and time again that their behavior absolutely does fall in line with the agendas of the CIA and the US State Department, and continually discover more and more evidence of extensive overlap between these corporations and government power.

“And these big tech giants… have basically gotten into bed with the US state,” journalist Alan MacLeod recently told The Canary‘s Slava Zilber. “I mean, we’ve seen Facebook partnering with the Atlantic Council, which is an offshoot of NATO, whose board includes people like Henry Kissinger, Colin Powell, Condoleezza Rice, and six or seven different former or current heads of the CIA. That’s the group that’s deciding what is ‘fake news’ and what is ‘real news’, and how the algorithms that dictate how billions of people around the world are going to see news. That’s who’s deciding what you see and what you don’t.”

Journalist Morgan Artyukhina noted this past May that FireEye, the very cybersecurity firm that Facebook and Twitter are relying upon to determine which accounts are inauthentic and require removal, was in fact “founded in 2004 with money from the CIA’s venture capital arm, In-Q-Tel.” As noted in 2016 by journalist Yasha Levine, FireEye itself feeds into anti-Russia narratives while simultaneously funding neoconservative narrative management firms which are hawkish toward Russia. As Sputnik noted last year, FireEye also happens to be “one of the few cyber firms to forensically analyze the alleged hack of the Democratic National Committee.”

“We need to stop pretending FB and Twitter aren’t arms of the US state,” Artyukhina said in a popular Twitter thread last month after another purge. “For over a year they’ve deleted accounts of Iranians, Venezuelans, Russians, and Chinese simply for daring to voice opinions different from the imperialist narrative, under the aegis of combating ‘disinformation’.”

“These reports often claim the accounts were ‘used to promote content from inauthentic news sites,’ but that simply refers to outlets like PressTV and TeleSUR, which don’t toe the Western MSM line,” Artyukhina added. “As always, it’s only propaganda when somebody else does it.”

“Inevitably, when the US targets a country for standing up to it, we’re bombarded with stories of evil deeds to justify US action against them,” Artyukhina continued. “This is not propaganda, to them, it’s simply ‘facts.’ However, try to counteract the massive MSM infowar – that’s disinformation.” 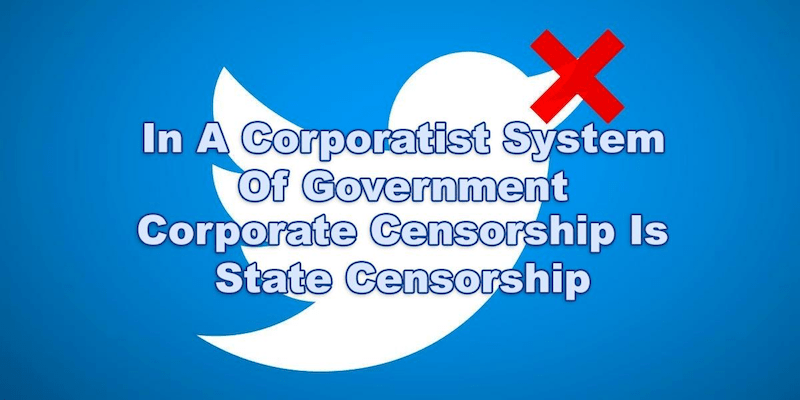 In a corporatist system of government, which has no meaningful separation between corporate power and state power, corporate censorship is government censorship. There are manifold distortions that have been put in place to mask the reality that the same power structures which control the US government are also dictating the behaviors of the handful of social media platforms upon which the public has become dependent for networking and gathering information about what’s going on in the world, but that is indeed the reality and we do indeed need to regard it as such.

Just because there are no official connections between these corporations and the government doesn’t mean we have to make believe we can’t see actual connections right there in front of our faces, plain as day. There is no legitimate reason to go on pretending that these plutocratic Silicon Valley institutions are meaningfully separate from the US government. The only way to keep that illusion in place would be to continue swallowing all the lies that the propagandists have been shoving down our throats.