Macron Knows: For Europeans the ‘Problem’ Country Is Not Russia but USA 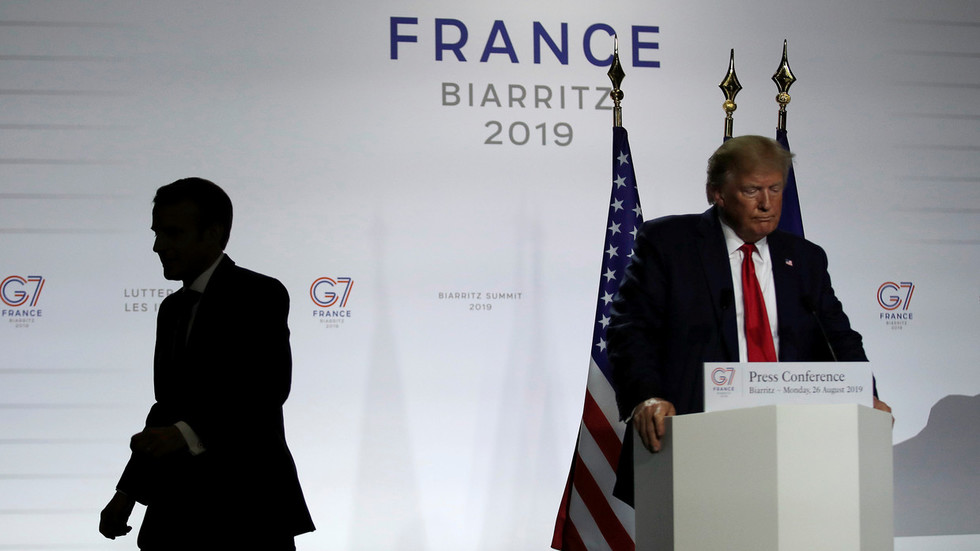 French President Emmanuel Macron leaves as U.S. President Donald Trump looks on after a joint news conference at the end of the G7 summit in Biarritz, France, August 26, 2019. © REUTERS/Carlos Barria

28 Aug 2019 – ‘The End Times of Western Hegemony’, I wish this were written by Macron although it might as well have been. He said exactly this after the G7 gathering which could be summed up in Shakespeare’s words as “much ado about nothing.”

Or to paraphrase Sherlock Holmes, a story of the dog that didn’t bark, the shoes that didn’t drop.

Most of the world’s biggest economies are not members of the G7, although Italy is albeit represented by a caretaker prime minister and now technically bankrupt (and in possession of enough French banking creditors to drown Macron and the whole French economy).China, India, Brazil, Turkey, South Africa and of course Russia are not members and while some were willing to be patronized as “guests” others had more pride.

So, for example, the invisible issue of the US shredding of the INF and the siting of short-range nuclear missiles in Poland and Romania by NATO – though constituting a clear and present danger to the peace of the world – didn’t get a look-in.Similarly the trade-wars currently rocking the world economy could not be properly dealt with because of the absence of China and other targets of US sanctions.

All the more remarkable then that no sooner had the participants and guests departed France when President Macron made some of the most fateful remarks of his presidency.

He castigated those who had “pushed Russia away,” those guilty of a “strategic mistake” of alienating Russia. Macron said the rise of China and Russia meant “we are living at the end of Western hegemony.”

And he described Russia as a “deeply European country.” Given that Russia is Europe’s biggest country, you may wonder why these obvious historical and geographical truths took so long to dawn on Macron and have not even yet dawned on his confreres.

More: ‘End of Western hegemony’: Why does Macron want Russia at Europe’s side?

Well, the answer is complicated.Western leaders surely know that the end of hegemony is already here – it may be said to have died at the gates of Damascus when the Syrian Arab Army and its Russian, and other, allies turned back the inexorable advance of the Western-backed Islamist fanatics and changed the course of the war.A series of failed “regime-change” operations from Yemen to Venezuela were further confirmation.

The complete failure of attempts to “punish” Russia over Crimea, the breakthrough of Nord-Stream2, the continuing rise of China and its potential to hole the American economy by retaliation against US sanctions in an election year, were all obvious signs.

And so one part of what we have with Macron’s speech is one of the emperors admitting the empire is at least down to its under-garments and it is not a pretty sight.
Fear of the increasing closeness between Russia and China is another traditionally French preoccupation. A glance at the map shows the sheer gigantism of the landmass of the two contiguous countries, and at the population graphs to see the human significance of China and Russia as close allies. Or at the economic statistics to see the extraordinary potential of the two closely co-operating economies by comparison with say the EU whose countries are now all either in or on the point of yet another debilitating recession.

The prestige in foreign policy terms of Russia has scarcely ever been higher. Russia has been seen to stand by, to protect and to prevail with its friends while others bring nothing but disappointment, even betrayal.

But Macron has another motive too. He knows that for the vast majority of Europeans – perhaps especially in France – the “problem” country is not Russia but the United States. Not Putin but Trump.The bull in the china-shop presidency of Donald Trump has brought to the surface an always latent hostility to US domination which stretches across the political spectrum from Gaullism to the once powerful and Moscow-oriented Communist Party, whose long-time leader Georges Marchais was the closest that ideology ever had in the West to a leader with genuine mass popularity.

And this anxiety, even fear, over US recklessness is growing rapidly in all European countries.Whatever Macron’s motivation, and however many other sins he has committed and continues to commit, let us not be churlish. After all, there is more rejoicing in heaven over one sinner who repents than over 99 righteous persons who have no need of repentance.