Forget an independent Kurdistan: They may have to do a deal with Damascus on sharing their area with Sunni Arab refugees. 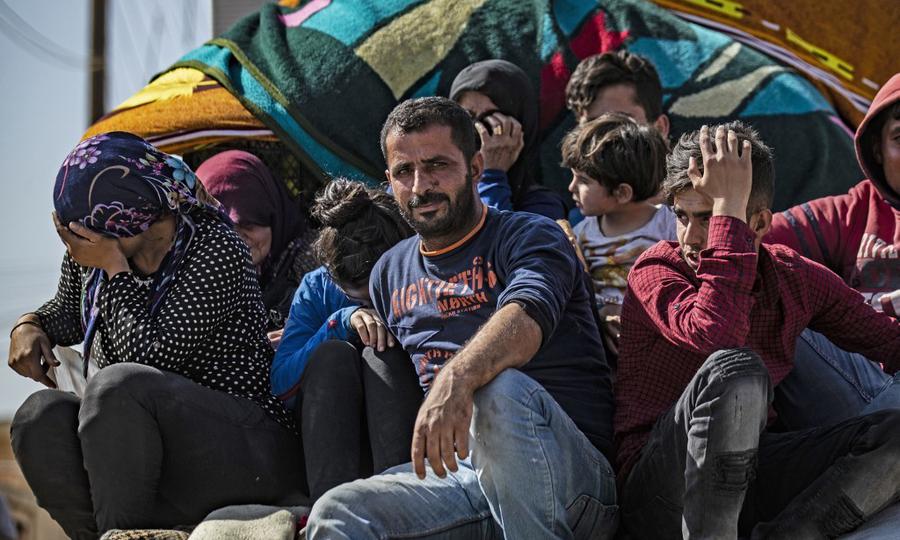 Syrian Arabs and Kurdish civilians arrive to Hassakeh city after fleeing bombardment on Syria’s northeastern towns along the Turkish border on October 10, 2019 amid fears of a new humanitarian crisis.
Photo: AFP / Delil Souleiman

14 Oct 2019 – In the annals of bombastic Trump tweets, this one is simply astonishing: here we have a President of the United States, on the record, unmasking the whole $8-trillion intervention in the Middle East as an endless war based on a “false premise.” No wonder the Pentagon is not amused.

….IN THE HISTORY OF OUR COUNTRY! We went to war under a false & now disproven premise, WEAPONS OF MASS DESTRUCTION. There were NONE! Now we are slowly & carefully bringing our great soldiers & military home. Our focus is on the BIG PICTURE! THE USA IS GREATER THAN EVER BEFORE!

Trump’s tweet bisects the surreal geopolitical spectacle of Turkey attacking a 120-kilometer-long stretch of Syrian territory east of the Euphrates to essentially expel Syrian Kurds. Even after Turkish President Recep Tayyip Erdogan cleared with Trump the terms of the Orwellian-named “Operation Peace Spring,” Ankara may now face the risk of US economic sanctions.

The predominant Western narrative credits the Syrian Democratic Forces, mostly Kurdish, for fighting and defeating Islamic State, also known as Daesh. The SDF is essentially a collection of mercenaries working for the Pentagon against Damascus. But many Syrian citizens argue that ISIS was in fact defeated by the Syrian Arab Army, Russian aerial and technical expertise plus advisers and special forces from Iran and Hezbollah.

As much as Ankara may regard the YPG Kurds – the “People’s protection units” – and the PKK as mere “terrorists” (in the PKK’s case aligned with Washington), Operation Peace Spring has in principle nothing to do with a massacre of Kurds.

Facts on the ground will reveal whether ethnic cleansing is inbuilt in the Turkish offensive. A century ago few Kurds lived in these parts, which were populated mostly by Arabs, Armenians and Assyrians. So this won’t qualify as ethnic cleansing on ancestral lands. But if the town of Afrin is anything to go by the consequences could be severe.

Into this heady mix, enter a possible, uneasy pacifier: Russia. Moscow previously encouraged the Syrian Kurds to talk to Damascus to prevent a Turkish campaign – to no avail. But Foreign Minister Sergey Lavrov never gives up. He has now said: “Moscow will ask for the start of talks between Damascus and Ankara.” Diplomatic ties between Syria and Turkey have been severed for seven years now.

With Peace Spring rolling virtually unopposed, Kurdish Gen. Mazloum Kobani Abdi did raise the stakes, telling the Americans he will have to make a deal with Moscow for a no-fly zone to protect Kurdish towns and villages against the Turkish Armed Forces. Russian diplomats, off the record, say this is not going to happen. For Moscow, Peace Spring is regarded as “Turkey’s right to ensure its security,” in the words of Kremlin spokesman Dmitry Peskov. As long as it does not turn into a humanitarian disaster.

From Washington’s perspective, everything happening in the volatile Iran-Iraq-Syria-Turkey spectrum is subject to two imperatives: 1) geopolitically, breaking what is regionally regarded as the axis of resistance: Iran, Iraq, Syria, Hezbollah; and 2) geostrategically, breaking the Chinese-led Belt and Road Initiative from being incorporated in both Iraq and Syria, not to mention Turkey.

When Erdogan remarked that the trilateral Ankara summit last month was “productive,” he was essentially saying that the Kurdish question was settled by an agreement among Russia, Turkey and Iran.

Diplomats confirmed that the Syrian Constitutional Committee will work hard towards implementing a federation – implying that the Kurds will have to go back to the Damascus fold. Tehran may even play a role to smooth things over, as Iranian Kurds have also become very active in the YPG command.

The bottom line: there will be no independent Kurdistan – as detailed in a map previously published by the Anadolu news agency.

From Ankara’s point of view, the objective of Operation Peace Spring follows what Erdogan had already announced to the Turkish Parliament – that is, organizing the repatriation of no fewer than two million Syrian refugees to a collection of villages and towns spread over a 30km-wide security zone supervised by the Turkish army.

Yet there has been no word about what happens to an extra, alleged 1.6 million refugees also in Turkey.

Kurdish threats to release control of 50 jails holding at least 11,000 ISIS/Daesh jihadis are just that. The same applies to the al-Hol detention camp, holding a staggering 80,000 ISIS family members. If let loose, these jihadis would go after the Kurds in a flash.

Veteran war correspondent and risk analyst Elijah Magnier provides an excellent summary of the Kurds’ wishful thinking, compared with the priorities of Damascus, Tehran and Moscow:

The Kurds have asked Damascus, in the presence of Russian and Iranian negotiators, to allow them to retain control over the very rich oil and gas fields they occupy in a bit less than a quarter of Syrian territory. Furthermore, the Kurds have asked that they be given full control of the enclave on the borders with Turkey without any Syrian Army presence or activity. Damascus doesn’t want to act as border control guards and would like to regain control of all Syrian territory. The Syrian government wants to end the accommodations the Kurds are offering to the US and Israel, similar to what happened with the Kurds of Iraq.

The options for the YPG Kurds are stark. They are slowly realizing they were used by the Pentagon as mercenaries. Either they become a part of the Syrian federation, giving up some autonomy and their hyper-nationalist dreams, or they will have to share the region they live in with at least two million Sunni Arab refugees relocated under Turkish Army protection.

The end of the dream is nigh. On Sunday, Moscow brokered a deal according to which the key, Kurdish-dominated border towns of Manbij and Kobane go back under the control of Damascus. So Turkish forces will have to back off, otherwise, they will be directly facing the Syrian Arab Army. The game-changing deal should be interpreted as the first step towards the whole of northeast Syria eventually reverting to state control.

The geopolitical bottom line does expose a serious rift within the Ankara agreement. Tehran and Moscow – not to mention Damascus – will not accept Turkish occupation of nearly a quarter of sovereign, energy-rich Syrian territory, replacing what was a de facto American occupation. Diplomats confirm Putin has repeatedly emphasized to Erdogan the imperative of Syrian territorial integrity. SANA’s Syrian news agency slammed Peace Spring as “an act of aggression.”

Which brings us to Idlib. Idlib is a poor, rural province crammed with ultra-hardcore Salafi jihadis – most linked in myriad levels with successive incarnations of Jabhat al-Nusra, or al-Qaeda in Syria. Eventually, Damascus, backed by Russian airpower, will clear what is in effect the Idlib cauldron, generating an extra wave of refugees. As much as he’s investing in his Syrian Kurdistan safe zone, what Erdogan is trying to prevent is an extra exodus of potentially 3.5 million mostly hardcore Sunnis to Turkey.

Turkish historian Cam Erimtan told me, as he argues in this essay, that it’s all about the clash between the post-Marxist “libertarian municipalism” of the Turkish-Syrian PKK/PYD/YPG/YPJ axis and the brand of Islam defended by Erdogan’s AKP party: “The heady fusion of Islamism and Turkish nationalism that has become the AKP’s hallmark and common currency in the New Turkey, results in the fact that as a social group the Kurds in Syria have now been universally identified as the enemies of Islam.” Thus, Erimtan adds, “the ‘Kurds’ have now taken the place of ‘Assad’ as providing a godless enemy that needs to be defeated next door.”

Geopolitically, the crucial point remains that Erdogan cannot afford to alienate Moscow for a series of strategic and economic reasons, ranging from the Turk Stream gas pipeline to Ankara’s interest in being an active node of the Belt & Road as well as the Eurasia Economic Union and becoming a full member of the Shanghai Cooperation Organization, all geared towards Eurasian integration.

And as Syria boils, Iraq simmers down.

Iraqi Kurdistan lives a world apart, and was not touched by the Iraqi protests, which were motivated by genuine grievances against the swamp of corrupt-to-the-core Baghdad politics. Subsequent hijacking for a specific geopolitical agenda was inevitable. The government says Iraqi security forces did not shoot at protesters. That was the work of snipers.

Gunmen in balaclavas did attack the offices of plenty of TV stations in Baghdad, destroying equipment and broadcast facilities. Additionally, Iraqi sources told me, armed groups targeted vital infrastructure, as in electricity grids and plants especially in Diwaniyah in the south. This would have plunged the whole of southern Iraq, all the way to Basra, into darkness, thus sparking more protests.

Pakistani analyst Hassan Abbas spent 12 days in Baghdad, Najaf and Karbala. He said heavily militarized police dealt with the protests, “opting for the use of force from the word go – a poor strategy.” He added: “There are 11 different law enforcement forces in Baghdad with various uniforms – coordination between them is extremely poor under normal circumstances.”

But most of all, Abbas stressed: “Many people I talked to in Karbala think this is the American response to the Iraqi tilt towards China.”

That totally fits with this comprehensive analysis.

He also explicitly declared Israel responsible for the bombing of five warehouses belonging to the Hashd al-Shaabi, the people mobilization units. And he not only rejected the Trump administration’s “deal of the century” between Israel and Palestine but also has been trying to mediate between Iran and Saudi Arabia.

And then there’s – what else? – China. On a state visit to Beijing on September 23, Mahdi clinched a proverbial win-win deal: plenty of oil supplies traded with investment in rebuilding infrastructure. And Iraq will be a certified Belt & Road node, with President Xi Jinping extolling a new “China-Iraq strategic partnership”. China is also looking to do post-reconstruction work in Syria to make it a key node in the New Silk Roads.

It ain’t over till the fat (Chinese) lady sings while doing deals. Meanwhile, Erdogan can always sing about sending 3.6 million refugees to Europe.

What’s happening is a quadruple win. The US performs a face saving withdrawal, which Trump can sell as avoiding a conflict with NATO alley Turkey. Turkey has the guarantee – by the Russians – that the Syrian Army will be in control of the Turkish-Syrian border. Russia prevents a war escalation and keeps the Russia-Iran-Turkey peace process alive.  And Syria will eventually regain control of its oilfields and the entire northeast.