WARNING: DISTRESSING FOOTAGE – The upsetting footage, taken at a lab in Hamburg, also shows cats and dogs that appear to be bleeding. Undercover filming of animals in distress ‘in German lab’.

16 Oct 2019 –Horrifying footage showing monkeys screaming in pain inside a German laboratory has prompted calls for a change to EU laws.

The distressing video, released by animal rights activists, also shows cats and dogs that appear to be bleeding and even dying after undergoing cruel tests.

The video was secretly shot inside Laboratory of Phramacology and Toxicology (LPT) in Hamburg, by an undercover worker from organisations Soko Tierschutz and Cruelty Free International (CF)I).

The monkeys are seen crying like newborn babies while they hang from metal harnesses strapped to their necks.

An ONLINE PETITION has been launched by activist Carolin Iding that calls for LPT lab to be shut down. So far it has gained more than 41,000 signatures since it was launched on October 11. PLEASE SIGN!

When they are not strapped in they are squeezed into tiny cages resulting in them going stir crazy.

Friedrich Mülln from Soko Tierschutz said: “The animals were even still waggling their tails when they were being taken to be killed, the dogs were desperate for human contact.

“The worst treatment was kept for the monkeys. The macaques breed of monkeys are small, relatively light primates, which are often used for animal experiments at LPT.

“They are kept in cramped conditions in small cages. Many of the animals have developed compulsive tendencies and are seen going round in circles.” 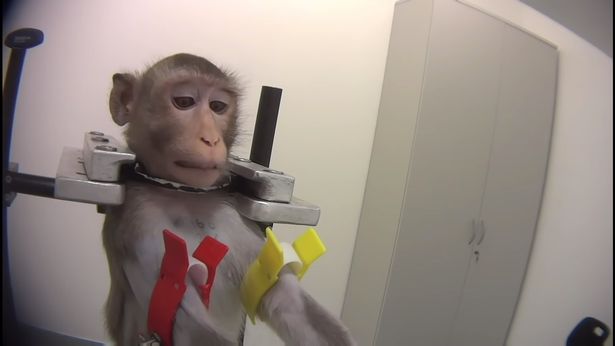 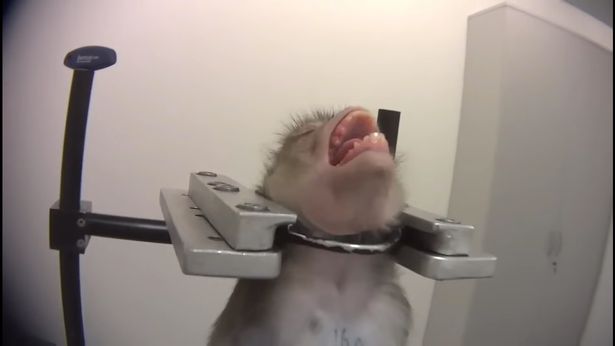 The monkeys scream out in pain in the footage  (Image: Cruelty Free International)

The eight-minute footage also shows toxicology tests being carried out on cats, dogs and rabbits, leaving them in a highly distressed state.

According to CFI, the tests involve poisoning animals to see how much of a chemical or drug it takes to cause serious harm, in an attempt to measure what a ‘safe’ dose for humans might be.

They claim the animals are injected with or made to eat or inhale increasing amounts of a substance to measure the toxic effects. 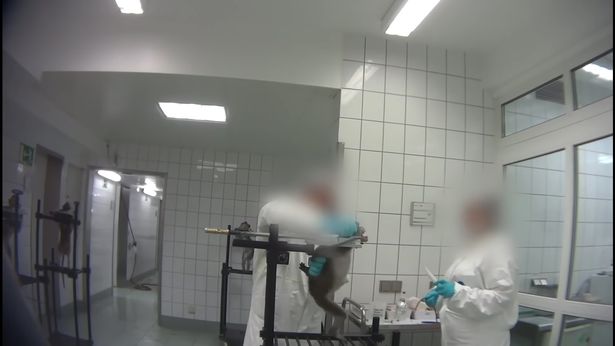 According to the undercover work staff are often violent towards the animals
(Image: Cruelty Free International) 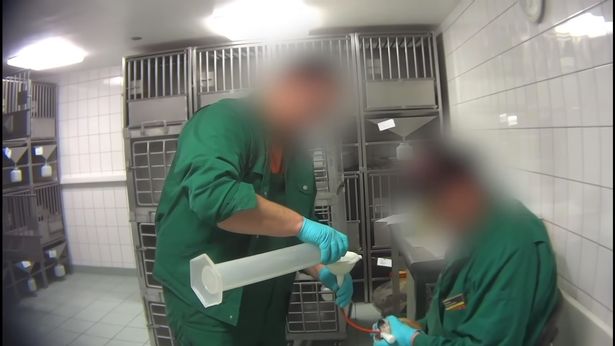 CFI claim animals are not given pain relief or anaesthetics.

The undercover worker said staff are not trained animal carers and were often violent towards the animals.

They said they witnessed beagles bleeding after the experiments in which pipes forced were down their throat as they were given capsules.

Michelle Thew, CFI chief executive, is calling for the laws to be changed. 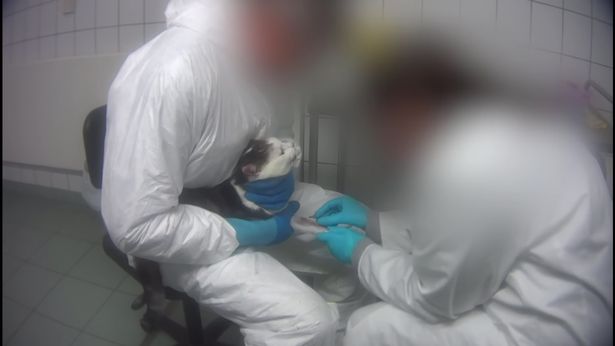 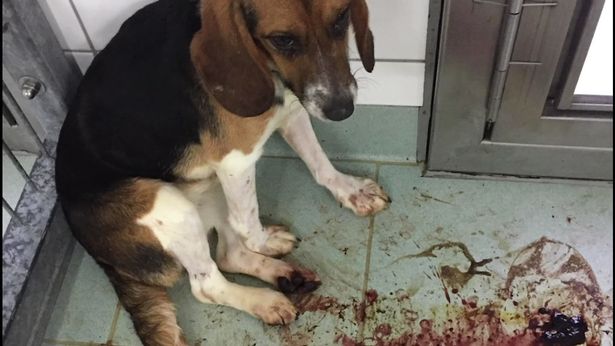 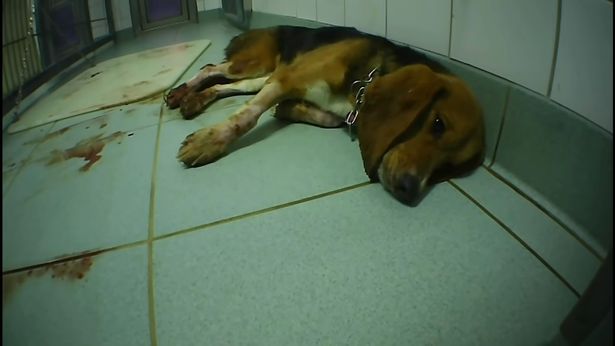 Animals were left in a distressing state after the tests
(Image: Cruelty Free International)

He said: “Our investigation has uncovered appalling animal suffering, inadequate care, poor practices and breaches of European and German law.

“We are calling for LPT to be closed.

“We are also calling for a comprehensive review into the use of animals in regulatory toxicity testing in Europe, including the UK.

“Every investigation, without fail, shows a similar tale of misery and disregard of the law.” 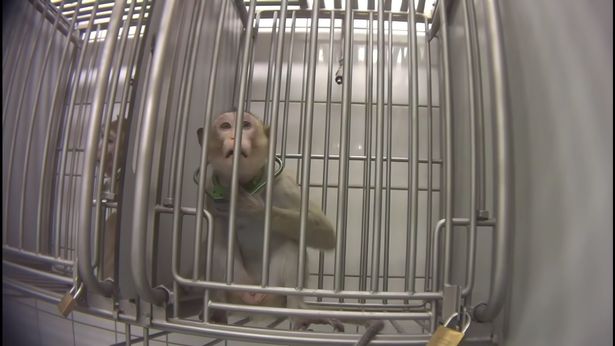 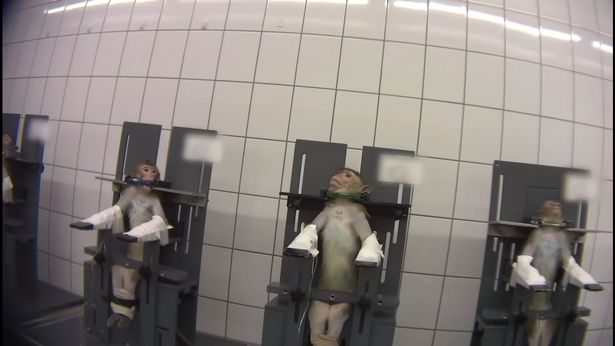 The monkeys were left hanging and in pain (Image: Cruelty Free International)

It says: “The recent research by the SOKO Animal Welfare to LPT shows again in horrible pictures and video recordings that in my city animals are tortured and maltreated.

When I think about how animals are suffering behind the walls of the LPT right now and experiencing hell on earth right now, everything in me contracts. 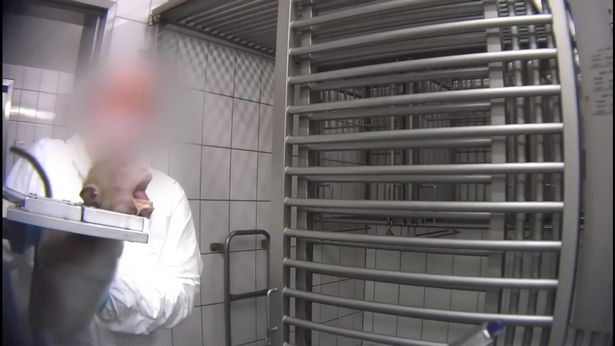 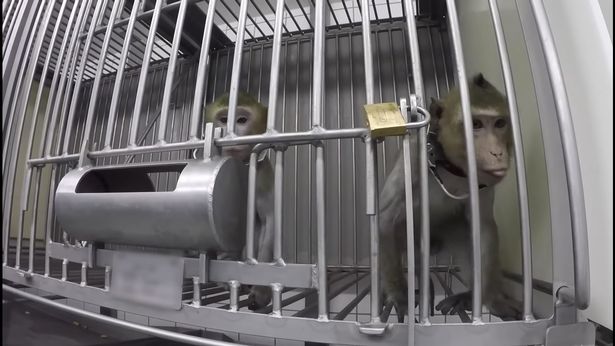 LPT is a family-owned company that carries out toxicity testing for pharmaceutical, industrial and agro-chemical companies globally to ensure products meet the requirements of governments and regulatory authorities.