“The Destruction of a Society”: First the U.S. Invaded Iraq — Then We Left It Poisoned 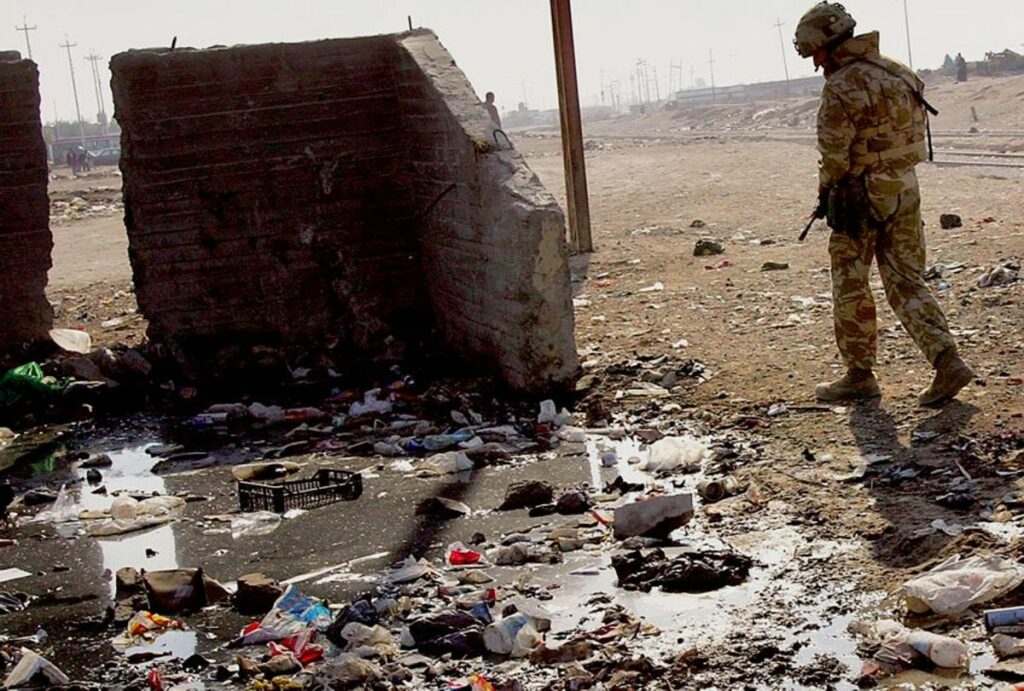 A US soldier walks past open sewage on December 14, 2005 in Az Zubayr near Basra in southern Iraq.  (John Moore/Getty Images)

The political and moral culture of the United States allows for bipartisan cooperation to destroy an entire country, killing hundreds of thousands of people in the process, without even the flimsiest of justification. Then, only a few years later, everyone can act as if it never happened.

In 2011, the U.S. withdrew most of its military personnel from Iraq, leaving the country in ruins. Estimates of the number of civilians who died during the war in Iraq range from 151,000 to 655,000. An additional 4,491 American military personnel perished in the war. Because the bombs have stopped falling from the sky and the invasion and occupation of Iraq no longer makes headlines, Americans likely devote no thought to the devastation that occurred in their name.

With the exception of Rep. Tulsi Gabbard of Hawaii, who is currently polling at or below 2 percent, no candidate for the Democratic presidential nomination has consistently addressed the criminality, cruelty and cavalier wastefulness of American foreign policy. Joe Biden, the front runner in the race, not only supported the war in Iraq — despite his recent incoherent claims to the contrary — but as chair of the Senate Foreign Relations Committee acted as its most effective and influential salesman in the Democratic Party.

The blasé attitude of America toward the death and destruction it creates, all while boasting of its benevolence, cannot withstand the scrutiny of science. Dr. Mozhgan Savabieasfahani, an environmental toxicologist at the University of Michigan and recipient of the Rachel Carson Prize, has led several investigative expeditions in Iraq to determine how the pollutants and toxic chemicals from the U.S.-led war are poisoning Iraq’s people and environment. The health effects are catastrophic, and will remain so long after the war reached its official end.

I previously interviewed Savabieasfahani about her initial research, and recently acquired an update regarding her team’s latest discovery that there is a close correlation between proximity to a U.S. military base and birth defects in Iraqi children.

Average Americans, even many who opposed the war in Iraq, seem to believe that once the military campaign is over the casualties of war stop accumulating. What is the purpose of your general research regarding the toxicity of the Iraqi environment resulting from American bombs, munitions and other materials? How does the American invasion and occupation continue to adversely affect the health of Iraqis?

Bombs and bullets have been used on an extreme scale in Iraq. Dropping tons of bombs and releasing millions of bullets leaves toxic residues the in air, water and soil of the targeted population. These pollutants continue to poison those populations years after the bombing stops.

What’s more, the United States imported thousands of tons of military equipment into Iraq to use in their occupation. They include, tanks, trucks, bombers, armored vehicles, infantry weapons, antiaircraft systems, artillery and mortars — some of which are coated with depleted uranium, and much more. These eventually find their way into U.S. military junkyards which remain across Iraq.

There are unknown numbers of military junkyards scattered across the Iraqi landscape.

Uranium and its related compounds remain toxic for millennia and poison local populations through food, air and water contamination.

The exposure of pregnant mothers to the pollutions of war, including uranium and thorium, irreversibly damages their unborn children. We found thorium, a product of depleted uranium decay, in the hair of Iraqi children with birth defects who lived in Nasiriyah and Ur City, near a U.S. military base.

The destruction of a society does not stop after U.S. bombs stop falling. Environmental contamination which the U.S. leaves behind continues to destroy our environment and poison our people decades after the bombs have stopped falling. The U.S. has a long history of irreversibly destroying human habitats. That must end.

In your groundbreaking new research, you discover that the teeth of Iraqi children have 28 times more thorium if they live near a U.S. military base. What is the significance of that conclusion, and what does the presence of thorium indicate about a child’s health? What kinds of abnormalities and health problems will they experience?

The Iraqi population is potentially contaminated with depleted uranium decay products. Baby teeth are highly sensitive to environmental exposures. Such high levels of thorium simply suggest high exposure at an early age and potentially in utero.

We found uranium and thorium in these children’s teeth and hair. Uranium and thorium were also in the bone marrow of children, all of whom had severe birth defects. The magnitude of public contamination caused by these alpha-emitting radioactive compounds is a serious question to be answered. Our bone marrow data is still unpublished, but we hope to publish it separately.

Thorium is an alpha emitter and, once in the body, it can cause cancer and other anomalies. Impacts can vary depending on the timing and amount of exposure. Childhood leukemia, which has been rising in southern Iraq, is a verified outcome of thorium exposure.

In our study, children with high levels of thorium had multiple birth defects. Our studies show that, across Iraq, children exposed to U.S. war contamination suffer primarily from congenital heart defects and neural tube defects.

Forty-four years after U.S. forces left Vietnam, there are still Vietnamese babies born with birth defects from the American military’s use of Agent Orange. How long do you believe Iraqis will continue to suffer from the American-led war?

If left unmitigated, the population will be permanently exposed to elevated toxic exposures which can impact the Iraqi gene pool.

Through the use of the scientific method, you are gaining the ability to identify a severe problem in Iraq. Considering that the problem is a result of the U.S. invasion, what could the U.S. do to solve or at least mitigate the problem?

The U.S. must be held responsible and forced to clean up all the sites which it has polluted. Technology exists for the cleanup of radiation contamination. The removal and disposal of U.S.-created military junkyards would go a long way towards cleaning toxic releases out of the Iraqi environment.

You are a scientist, not a political analyst, but you must have some thoughts regarding the political implications of your work. How do you react to the lack of substantive conversation about the consequences of war in American politics and the press, and the American establishment’s evasion of responsibility on this issue?

I expect nothing from the American political establishment or their propaganda machines which masquerade as “news media” and feed uncritically off State Department press briefings.

Fortunately, there is a movement to criminalize environmental contamination caused by war. Damage to nature and the human environment must be considered a war crime.

Scientists are currently asking international lawmakers to adopt a fifth Geneva Convention which would recognize damage to nature as a war crime, alongside other war crimes. I hope that will make a difference in our ability to protect human lives and our environment.