21 Nov 2019 – At a meeting on the premises of the European Parliament in Brussels last Thursday [14 Nov], MEPs, prominent public figures, and significant defenders of democratic rights condemned the US-led pursuit of WikiLeaks founder Julian Assange and called for his freedom.

The event reflected growing support for Assange throughout Europe and internationally. A German-language petition calling for Assange’s extradition to the US to be blocked has been signed by over 343,000 people.

The forum was sponsored by the European United Left–Nordic Green Left (GUE/NGL) parliamentary grouping, which is comprised of social democratic parties and self-styled left-wing organisations throughout the continent and in Britain. Some of its constituent parties have condemned the persecution of Assange and called for the European powers to take action against it.

The speakers from GUE/NGL stressed the sweeping implications of the US attempt to prosecute Assange for publishing activities carried out in Europe. They warned that it would create a precedent for the US to apply its domestic law to European citizens and to seek the extradition of journalists and activists who fall foul of the American government.

These concerns coincide with a broader hostility within European political circles to the “America First” program of the US administration of President Donald Trump, which is undermining diplomatic relations and international institutions that have been in place since the end of World War II.

Chairing the event, Clare Daley, an MEP representing the Irish Independents 4 Change group, declared that the defence of Assange concerned

“the most important press freedom case of our generation.”

One of the few pictures of zombie-like Julian Assange being transferred to the hospital wing of Her Majesty’s Belmarsh prison, the British version of Guantanamo.
Image from Medium

Daley stated that the US prosecution of Assange under the Espionage Act for lawful publishing activities was a “vindication” of his decision to seek asylum in Ecuador’s London embassy in 2012. She said that the 2010 publications, for which Assange is charged, were a

“watershed moment” which “were, and probably still are, the most important public interest disclosures of our time.”

The documents, Daley remarked, had exposed war crimes in Iraq and Afghanistan, along with the complicity of nominally neutral countries, such as Ireland. WikiLeaks had revealed that the Irish government allowed the US military to use its airports in transit to the wars in the Middle East. “Stories like this were replicated in every country in the world,” Daley said.

David Greene of the Electronic Frontier Foundation, an international digital rights group, detailed the unprecedented character of the attempted US prosecution of Assange, which marks the first time that the Espionage Act has been used against a journalist and publisher in over 100 years.

“What Julian has been charged with are very standard journalistic practices.” The US indictment placed emphasis on the fact that WikiLeaks had, in 2009, published a list of its “most wanted leaks” and that in an alleged chat with the courageous whistleblower Chelsea Manning, Assange had written that “curious eyes never run dry.” Greene noted that “the word ‘encouraged’ is used nine times in the indictment and each time it makes it seem like it’s an improper act.”

US allegations that these facts showed a conspiracy between Assange and Manning were, Greene stated, an attempt to criminalise

“standard acts such as encouraging a source to provide information and indicating a public interest in receiving information.”

Greene said that this had likely not been attempted by a previous US administration, for fear that it would lead to a

“constitutional challenge” based on the “near absolute right to publish information of public interest under US law.” 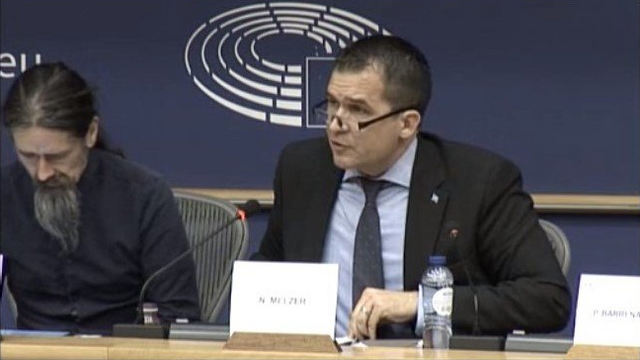 Nils Melzer addressing the meeting at the European Parliament

Nils Melzer, the United Nations Special Rapporteur on Torture, warned that Assange’s case was “so rich in facts and perspectives that it is easy to miss the forest for the trees.” Stressing the need for it to be placed within a broader perspective, he referenced the norms established by the bourgeois-democratic revolutions of the 18th and 19th centuries.

“Two hundred years ago on this continent we were ruled by people who had absolute power. We decided we didn’t like that. We created states that were to be democracies governed by the people.”

Melzer made clear that the trampling of Assange’s legal and democratic rights was a direct assault on these fundamental norms. “What Julian Assange is accused of in the US is basically investigative journalism, which we need. It is a systematic necessity for the state of democracy that we have investigative journalists,” he declared.

Melzer outlined his finding, in May, that Assange has been subjected to “psychological torture.” The UN official stressed that this was the result of the US-led persecution of Assange, including his arbitrary detention in the Ecuadorian embassy for almost seven years, enforced by the British state, a campaign of “public mobbing” and the denial of his basic legal rights by the trumped-up Swedish investigation into allegations of “sexual misconduct.”

Melzer made clear that all of the states involved, including the US, Britain, Sweden and Ecuador, had blithely dismissed his findings that they were culpable for the torture of Assange. The British government had rejected his calls for Assange to be immediately released and had continued to hold him in a maximum-security prison in conditions of virtual solitary confinement.

This treatment, combined with a refusal to allow Assange full access to the legal documents necessary to prepare his defence, along with other flagrant violations of judicial process by the British courts, was intensifying the pressure on the WikiLeaks founder.

Melzer concluded by warning that “psychological torture is not ‘torture lite.’ It aims directly at their personality and emotional identity.” The torture of Assange, Melzer warned, could rapidly spiral into a health crisis that would threaten his life.

Bob Carr, a prominent Labor Party figure, spoke via video-link from Australia. Carr was foreign minister in the Labor government of Prime Minister Julia Gillard, which denounced WikiLeaks’ publication of leaks as “illegal” and joined the US-led vendetta against Assange—an Australian citizen whose rights it was obligated to defend.

Since the US charges against the WikiLeaks founder were unveiled in May, however, Carr has spoken of their dire implications. His statements at the forum had the character of a warning to the political establishments in Britain and Australia of the mass hostility that would erupt if Assange died in prison or was extradited to the US.

Carr declared: “The present condition of Julian Assange needs to be addressed. It’s as brutally simple as this, if he were to die in prison then the finger will be pointed, with total justification, at the political leaders who allowed him to be… in maximum security, with intermittent access to his legal representatives.”

Carr’s comments underscore the official fears over the immense public support that Assange enjoys. They further clarify the motivations of 11 current Australian parliamentarians, who have formed a grouping calling on the government to end its complicity in Assange’s persecution and to take action to block extradition and secure his release.

In a moving address from the floor, Assange’s father, John Shipton revealed that prior to his last British court hearing on October 21, Assange had been strip searched and “placed in what prisoners call a ‘hotbox.’” Assange’s legal representatives, Shipton stated, had “never seen a defendant brought into court in that condition, in 50 years of working in criminal law.” Assange had struggled to remember his name and date of birth.

Shipton pointed to the historic significance of WikiLeaks publications, noting that the diplomatic cables revealed the US connections of the military leaders who this month staged a coup in Bolivia. Assange and other WikiLeaks staff had also gone to extraordinary lengths to “give names to the dead,” who were slaughtered in the illegal US invasion and occupation of Iraq.

“We must face this ceaseless prosecutorial persecution of Julian and we must insist that it stops, and it stops straight away,” Shipton concluded.