In Bolivia as in Palestine 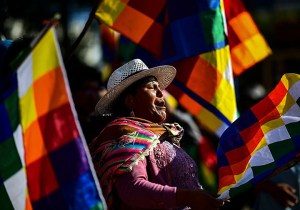 20 Nov 2019 – Bolivia resembles Palestine these days. For many reasons it is important to make this comparison now as the horror of the installation of a brutal dictatorship is unfolding in that South American country.

First and foremost these are two native peoples who not only face an implacable enemy but also a religious factor that is among the most lethal weapons that could be used against them.  In the name of a defamatory and unhealthy version of true Christianity, the Bolivian oligarchy in true Nazi style is promoting “racial purity”, by using the Bible as its mandate, including brainwashing being applied by the Pentecostal churches to co-opt the poorest layers of society and the different and numerous original ethnicities that it considers inferior.

If these tricks don’t work, plan B is rolled out to show them hatred by mocking and humiliating them in every circumstance and destroying the most precious symbols of their identity. Burning of their wiphalas for example, despising and degrading Bolivian indigenous women or cursing the indigenous people as a whole as Camacho, Mesa and the de facto president have done, are concrete elements of punishment to those who look different.

This is the same script Zionism wields against the Palestinian people. It is the idea of ethnic cleansing, by the way of distorting the reading of a history where fundamental data is omitted to disguise that when the invaders arrived, they found the indigenous people who had lived there for centuries clinging to their territory with the same strength and determination that they do in the present. The Zionist entity is, like the stateless Bolivian oligarchy, racist and violent to the core, one in the name of Jehovah and the other using an invented God to justify its crimes.

This Bolivian dictatorship of today, which orders its military and police to repress the indigenous-peasant people, workers and students as they did in the most sinister days of the Latin American decade of the 60s and 70s, are shooting from helicopters or tanks, torturing and murdering. This also has class hatred in it against those who, thanks to a popular and revolutionary government, could feel included for the first time, treated as equals, empowered and entwined with the rest of the population.

In Palestine, the occupier not only seizes territories, expelling the native inhabitants, demolishing their homes and destroying their crops, but also manifests a deep hatred towards those who, in spite of continuous persecution and massacres, maintain a profile of political and above all cultural resistance. The occupants act as an oppressive class, being in reality an elite of new riches nourished by the wealth that others like them send from the diaspora. The objective of these voluntary contributions, sometimes under pressure, is to achieve, among other projects of economic opulence, to grease the machinery that carries out the continuous looting of Palestine and through a gigantic war apparatus, to militarize that territory in order to harass the rest of the Arab world from there.

On the other hand, what can we say about the resistance to the oppressor in Bolivia when every day we are seeing the next Tupaj Katari, Bartolina Sisa and Evo Morales, heroic scenes in which the masses guided by their natural organizations using all the methods of struggle, but making the main weight fall on the peaceful resistance to which the indigenous peoples have been accustomed to using for centuries. An important aspect of this strategy is the blockade of the big cities to make the maximum weight felt by those who sow, produce, manufacture and distribute food. Or at the same time they generate massive mobilizations, occupying the streets, the highways and the diverse territories, demanding that those who were not elected fall and that the man who socialized the leadership with his comrades in so many struggles re-govern again. The response of the parasites of the bourgeoisie and the affluent classes to the slightest hint of shortage consists of ordering their uniformed dogs to go hunting.

As in Bolivia, the Palestinian people have not stopped fighting and mobilizing, not a single day since the occupation and the Nakba it brought with it more than seven decades ago, and in that sense the peaceful “return marches” for more than a year now led by the people of Gaza or the continuous actions of protest and resistance in the West Bank, become landmarks of territorial vindication where the heroism of its protagonists are shown, confronting with stones heavily armed snipers in Palestine, or police and military blinded by hatred, gasifying men, women and children to the point of asphyxiation, or machine-gunning them, in the Bolivian El Alto or Cochabamba. In both confrontations, identity symbols such as the multicolored wiphala of the indigenous peoples of Abya Yala or the four-colored Palestinian insignia are proudly raised by those who know that the two synthesize much more than a banner, which must be defended with life if necessary.

Finally, a note on how the world reacts to these ethnic cleansings. The governments, almost all of them, with the exception of revolutionary Cuba and Venezuela (to which we can add, especially in the case of Bolivia, Mexico, Nicaragua, Uruguay, the future Argentine government and Third World countries) keep quiet or close ranks supporting the murderers.

In the field of international intellectuals and academics, in the face of conflicts of such magnitude as those occurring today in Latin America and the Middle East, there are also two distinct perspectives. An important minority that is aligned with the Bolivarian and Cuban revolutions that is clear on who the main enemy is and do not hesitate to show their support for both peoples who are being subjugated. Unfortunately, however, there are some dissonant expressions.

They are the ones who are on the lookout to mark and emphasize what is wrong with the leadership or the peoples, and throw themselves into corrosive criticism. They are the ones who do not use the same power, in the midst of a massacre here or there, to denounce and confront with the same force the criminals linked to the Empire.

We see it over and over again when it comes to Palestine, when tired of turning the other cheek, there were and there are sectors of the resistance that decided to combine peaceful methods of struggle with revolutionary violence. Immediately the voices of the eternal “good thinkers” (many confessed “progressive” or “left”) come out to pontificate: “this is not how it is done”, “this plays into the hands of the enemy”.

And without further ado, they continued or continue to give lectures on this at various universities, while those who fortunately do not listen to them, give themselves completely to defend their territories.

Now, in Bolivia, the same thing is happening, this intellectuality that calls itself “in solidarity” or even “anti-imperialist”, is very concerned about discovering the “magnitude” of the “errors” of Evo Morales and they do it, once again from the comfort of the people who overthrew Evo not because of their errors but because of their thousands of successes and who are now trying to take the Bolivian people back to the Middle Ages.

It is a pity that not even in such limited moments, where the Empire, capital and patriarchy are on one side and those who challenge it on the other, can they close ranks to give a common sense response to such enemies. But since these are not times of speeches, advice or omnipotent attitudes, but rather times of action and concrete solidarity, we will continue in the struggle and those who do not understand that will be left on the road.