Israel Killed 222 Gaza Protestors Since 2018. Only One Soldier Has Been Indicted 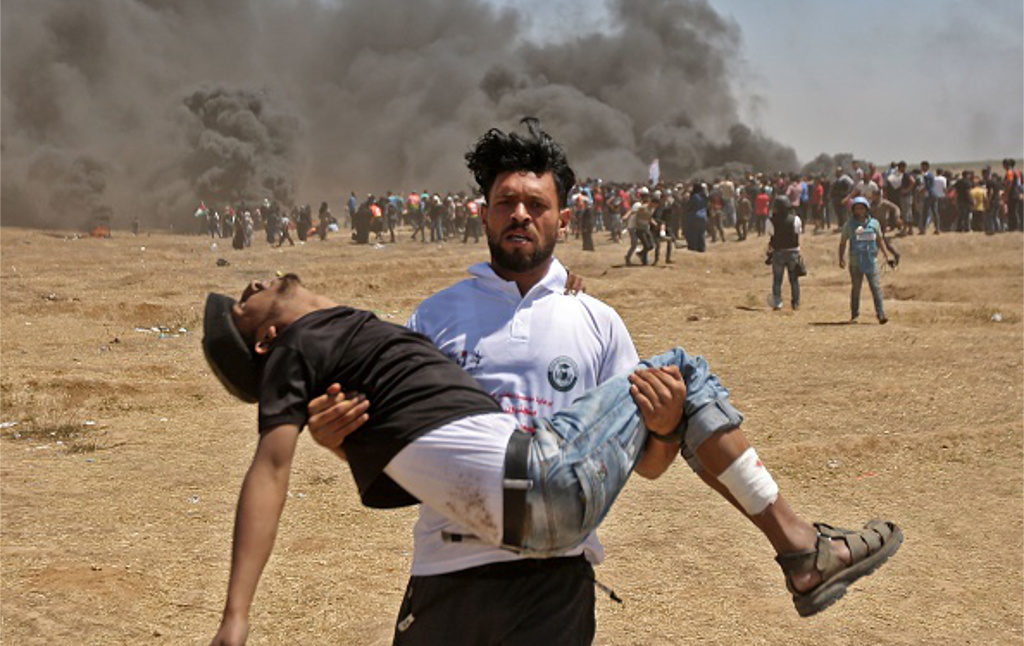 6 Nov 2019 – Two women and a teenage boy stand close to the fence separating Gaza from Israel, waving Palestinian flags. Four other teenagers approach. One of them, 14-year-old Othman Hiles, is wearing a white shirt and dark pants. He goes up to the fence, touches it, walks along it for a few yards, and touches it again. He puts his foot on the fence and starts to climb. As his second foot reaches the fence, a shot is fired. Hiles is hit in the chest and falls.

A month after Hiles was killed, Israeli Military Advocate General Sharon Afek ordered an investigation into the incident. More than a year later — after Afek had ordered another 10 investigations into the killing of Gazan demonstrators at the hands of Israeli soldiers — the military announced that the soldier responsible for Hiles’ death had been convicted in a plea bargain of “exceeding authority in a manner that endangers human life and health.” The army sentenced him to a month of military labor, a four-month suspended sentence, and demoted him to the rank of private.

We will never know what happened during the MAG Corps meetings the year Afek and his people decided to investigate the deaths of only 11 Palestinian demonstrators, indict only one soldier, agree to an absurd plea bargain and, most importantly, leave the IDF open-fire regulations essentially unchanged.

Not that it really matters. What matters are the facts: Hiles, only 14, was killed more than a year ago on July 13, 2018. What matters is that he was captured being shot on video while climbing the perimeter fence opposite Gaza City during one of the weekly protests held by Gazans almost every weekend since late March 2018. What matters is that since the protests began, Israeli security forces have killed 222 demonstrators and wounded around 8,000 with live fire. What matters is that 45 of those killed were minors, 28 of them under the age of 16, and that most of those killed or wounded were unarmed and were not endangering the soldiers, who were armed and well-protected behind an electronic fence dozens of yards away. There were lookouts, jeeps, crowd control measures, and occasionally, tanks.

The military has refused to make any essential changes to its open-fire regulations, promising only to investigate “exceptional incidents.” To date, the MAG has identified 11 such cases, according to a military statement. Why eleven? Why these eleven? It’s anyone’s guess.

Some of the incidents were captured on video; others, like the killing of paramedic Razan al-Najjar or teenager Muhammad Ayoub, drew international attention and criticism. Is that why the military chose to investigate these cases? Unlikely. Why not other well-documented and no less shocking incidents, such as the killing of 16-year-old Ahmad Abu Tyour, shot by soldiers after he threw a stone at them while waving at them?

The main purpose of investigating these “exceptional cases” is not to uncover the truth or ensure that no more unarmed, non-dangerous civilians are killed. Quite the opposite: it is to keep up the false show of a functioning justice system and the warped reasoning that killing hundreds of Palestinians and injuring thousands — hardly “exceptions” — is legitimate.

That is why these investigations are devoid of meaning. They always center on the soldiers on the ground — never on the commanders who trained them, or the MAG Corps officials who sanctioned the procedures and open-fire regulations that guide them. Those who bear real responsibility are never brought to trial or even investigated.

The military, meanwhile, tries not to investigate too hard. Suffice it to examine how the Military Police Investigations Unit — closely supervised by the MAG Corps — handles the investigations: stretching them out for months on end without collecting external evidence, while relying almost exclusively on the accounts of the soldiers involved in the incident (and, in some cases, on the accounts of the Palestinian victims). The MAG Corps is quick to close the case — for lack of evidence (with no effort made to collect it) or for “lack of culpability” — after unconditionally accepting the soldiers’ accounts, even when they contradict each other.

Yet even a successful whitewashing system needs a fig leaf to silence criticism. That is why, once in a while, an investigation does result in prosecution and conviction. Why this particular soldier who killed 14-year-old Hiles? It’s anyone’s guess — precisely because the conviction in this case is part of the systemic farce.

That is why the soldier was not charged with “manslaughter” or even “negligent manslaughter,” but with “exceeding authority in a manner that endangers human life and health.” That is why despite footage of a teenage boy standing almost alone by the perimeter fence in a quiet area — with no grounds for claiming that the sniper shots were not directed at him — the military stated in all earnestness that “the investigation did not uncover evidence that meets criminal criteria and substantiates a causal tie between the soldier’s shooting and the injury to the rioter.”

One can only imagine how decisions are made in the Tel Aviv offices of the MAG, which authorizes open-fire regulations, opens and closes investigations about people killed by those very regulations, and which decides to reach plea bargains too absurd to take seriously.

Meanwhile, in blockaded Gaza? Asmahan Hiles, Othman’s mother, envisions a different reality: “Ever since Othman was killed, I’ve watched the footage over and over, asking myself, ‘What did he do that was so terrible?’ I watch the video and cry my heart out. I ask myself, how did he feel when the bullet pierced his body? Did it cause my little boy a lot of pain? How could he bear the pain of the bullet when it hit him?”

Eyal Sagiv is a data coordinator at B’Tselem. This article was first published in Hebrew on Local Call. Read it here.