8 Nov 2019 – Court released him today after top court ruled that a person can be incarcerated only after exhausting all remedies. 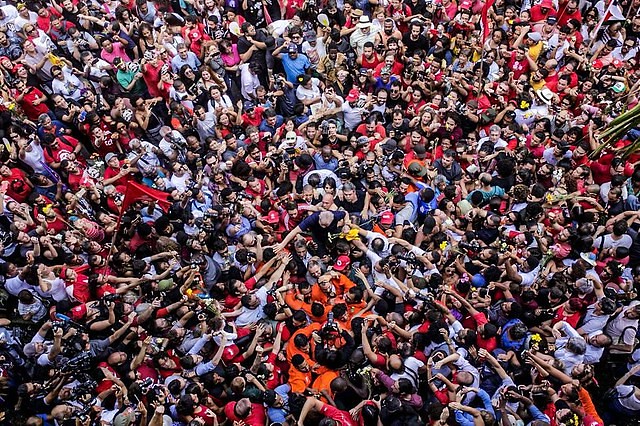 On the day Lula was incarcerated, a massive crowd gathered to stop the ex-president from turning himself in to the police.  / Francisco Proner/Farpa Coletivo

Lula was greeted by a massive crowd of supporters waiting for him outside the building where he was incarcerated.

The court order to free the left-wing leader came after the ex-president’s lawyers filed a petition this morning, following a Supreme Court ruling last night, when the top court declared that a person convicted in a case can only be imprisoned after all possibilities of appeal are exhausted.

Lula will visit the Free Lula Vigil, a camp set up outside the Federal Police building where he was incarcerated, where activists and supporters have been denouncing, since April last year, the political motivations behind his conviction. Later, Lula will fly to São Bernardo do Campo, where he lives.

Throughout his time in prison, the ex-president frequently said the first thing he would do when he was released is visit the Free Lula camp. Every day for the past 580, the participants of the Free Lula camp shout good-morning, good-afternoon, and good-evening to the Workers’ Party leader, who heard his supporters from his cell and said the greetings helped to keep his spirit high.

By law, Lula could already enjoy semi-open prison conditions, but he had denied the modification of his sentence because he believes that it would damage his dignity. “I want you to know that I do not accept bargaining of my rights or my liberty,” the former president said.

::Exclusive | Lula: “We have to recover the Brazilian people’s rebellious spirit”::

Now the ex-president’s defense team will file a petition for the Supreme Court to rule on the habeas corpus that requests the annulation of the legal process of the Guarujá beachside apartment case. His lawyers Cristiano Zanin Martins and Valeska Martins argue that the former judge Sergio Moro and the prosecutors of Operation Car Wash were biased against Lula, “among other numerous illegalities.”

The ex-president has been incarcerated since April 7, 2018, after imprisonment was decreed by the Sérgio Moro, the ex-judge who was overseeing Operation Car Wash and the current Minister of Justice.

Moro himself was responsible for the conviction of Lula in the Guarujá beachside apartment case, sentencing him to prison for nine years and six months. The decision of Moro was upheld by a group of appeals judges, who increased his sentence to twelve years and one month in prison.

A beachside apartment in Guarujá, on the coast of Sao Paulo, was allegedly set aside and remodeled under the orientation of the family of the ex-president. The accusation also alleged that Lula committed the crime of allowing the OAS to store the gifts he received while president.

On the day that the accusation was presented to the press, Dallagnol showed a PowerPoint presentation where he described Lula as the “maximum commander” and “biggest beneficiary” of the corruption schemes uncovered by Operation Car Wash.

The rush attitude by the head of the task force was disparaged by the then Supreme Court justice Teori Zavascki, who said Dallagnol “put on a show” and wasn’t taking the case and the investigation seriously.

Seventy-three witnesses testified in 23 hearings, and none of them stated that the beachside apartment was officially owned by Lula.

Moro only managed to prove that the ex-president only visited the apartment once in Guarajá. He weighed the declaration of a co-defendant against Lula: Léo Pinheiro, executive of construction company OAS. Pinheiro was sentenced to 16 years in prison in August 2015 for corruption, money laundering and organized crime, and he gave a series of revelations to the Federal Prosector’s Office between March and June of 2016.

With regards to the issue of the beachside apartment in Guarujá, the businessman insisted that Lula was innocent. According to him, the contractor tried to offer “benefits” to the ex-president to maintain a good relationship with the Workers’ Party (PT) governments, but there was not any response by Lula, who said he was not interested in buying the property he offered him.

According to the report of the newspaper Folha de S. Paulo, this attitude has made the Federal Prosecutor’s Office “lock in” plea bargain agreements with the construction company OAS. The report showed that the contractor was pressured to work out a plea bargain, which gave Pinheiro the chance to reduce his sentence by two thirds.

For this, it was necessary to alter the content of his testimony and “make it fit” the theory of the prosecution. On April 20, 2017, after almost a year of insisting, the OAS executive told Sergio Moro that Lula was the owner of the apartment and that he would have received the property in exchange for advantages for the company. The property and the cost of the remodeling, the accusation claimed, had been allegedly priced down for a “general counter-current of briberies” administered by the OAS group in collaboration with PT agents.

In order to justify the lack of documents that would prove that the property was owned by the former president, the solution found by the businessman and his lawyers was to say that “the evidence was destroyed” after Lula himself allegedly requested it.

Although the sentence reduction has been on the agenda after this testimony was shared, his plea bargain was not made official, which could imply that the executive of OAS did not have to swear on the veracity of the information nor present documents to support his allegations.

The same court that increased Lula’s prison sentence decided to reduce the businessman’s sentence from ten years and eight months in prison to three years and six months in semi-open conditions.

In his decision convicting Lula, Moro himself wrote that, even though there is no doubt that the files show that the property is owned by OAS, “that is not enough to solve the case.”

The ex-president’s lawyers believe that Judge Moro changed the accusation presented by the Federal Prosecutor’s Office to be able to charge him of corruption and money laundering. But because he could not prove that Lula owned or enjoyed the apartment, the judge started to work with the theory supported by Léo Pinheiro’s plea bargaining testimony.

Regarding the corruption and money laundering charges in the case of the construction company storing  the president’s belongings, Moro acquitted Lula and the other defendants due to lack of evidence.