Revealed: Danger and Squalor for Cleaners Who Remove Human Waste by Hand

The plight of sanitation workers in the developing world should be addressed urgently, the UN said, warning that their rights, health and dignity are at risk.

13 Nov 2019 – Highlighting the dangers for the millions of people who clean toilets, sewers and septic tanks, ahead of World Toilet Day on 19 Nov, the World Health Organization (WHO) insisted that while the workforce performs an essential public service, their own health is compromised and they are often shunned.

“Workers often come into direct contact with human waste, working with no equipment or protection to remove it by hand, which expose them to a long list of health hazards and diseases”, WHO said in a statement accompanying a new report.

“It is only when those critical services fail, when society is confronted with faecal waste in ditches, streets, rivers, and beaches or occasional media reports of sanitation worker deaths, that the daily practice and plight of sanitation workers come to light,” it maintains.

A latrine emptier is lifted out of a pit in Bangalore, India. WaterAid/CS Sharada Prasad

Many of the challenges sanitation workers face stem from their lack of visibility in society.

It describes the workforce as “invisible, unquantified, and ostracized” and insists that many of the challenges that sanitation workers face stem from a lack of acknowledgment for what they do.

While the workers include full-time employees with health benefits, pensions and legal protection, a significant proportion comes from some of the “most marginalized, poor and abused members of society”.

All that is on offer for these people is “low-grade, labour-intensive and dangerous work”, the report continues, highlighting the hazardous biological and chemical agents they encounter in dangerous environments.

Informal workers most at risk

Insisting that safe sanitation must go hand in hand with a safe and dignified working environment for those who run and maintain the sanitation services that protect our health, the report notes that informal workers are particularly vulnerable, compared even with the rest of the casual sector.

These casual sanitation workers receive poor pay and benefits such as access to healthcare, along with weak enforcement and oversight of laws and policies protecting them, the publication insists.

Because of poor investment and infrastructure, millions of people including children die every year from diseases associated with inadequate water supply, sanitation and hygiene.

According to WHO, poor sanitation alone causes up to 432,000 diarrhoeal deaths annually, and it is also linked to the transmission of other diseases including cholera, dysentery, typhoid, hepatitis A and polio. 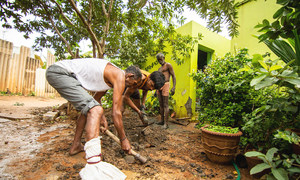 Few developing countries have any guidelines

One of 17 objectives agreed by the international community in 2015, Sustainable Development Goal 6 calls for clean water, decent toilets and good hygiene for everyone, everywhere by 2030.

In a bid to promote positive change, the UN agency is helping countries to address the problem by calling for the protection of sanitation workers to be included in national sanitation policies and risk-assessment and management.

The report also highlights where sanitation work has been officially acknowledged and formalized, citing South Africa as an example, where public and private employees follow national labour standards and have proper equipment and training.

“Many of the challenges sanitation workers face stem from their lack of visibility in society,” WHO said, noting that few countries in the developing world had any guidelines to protect sanitation workers. “Where laws do exist, Governments may lack the financial or technical means to implement them, and the informality of the roles presents further challenges.”