The Berlin Wall and General Pyrrhus

9 Nov 2019 – Media jubilation reaches a climax on November 9th, thirty years after the bumbling, perhaps even misunderstood decision to open the gate for all East Germans to stream through, hasten to the nearest West Berlin bank for their “welcome present“ of 100 prized West German marks, and taste the joys of the western free market system. Within less than a year they would end the experiment known as the German Democratic Republic to join, and fully enjoy, the wealthy, healthy, prosperous united Germany, with its freedom of the press, speech, travel and consumer bliss.

The jubilation thirty years ago is easy to understand and to sympathize with. Alone the ability, whenever and as often as desired, to meet and celebrate with friends and relatives, sufficed to bring tears to many, many eyes and the almost universal cries of „Wahnsinn!“ – “Simply crazy!” 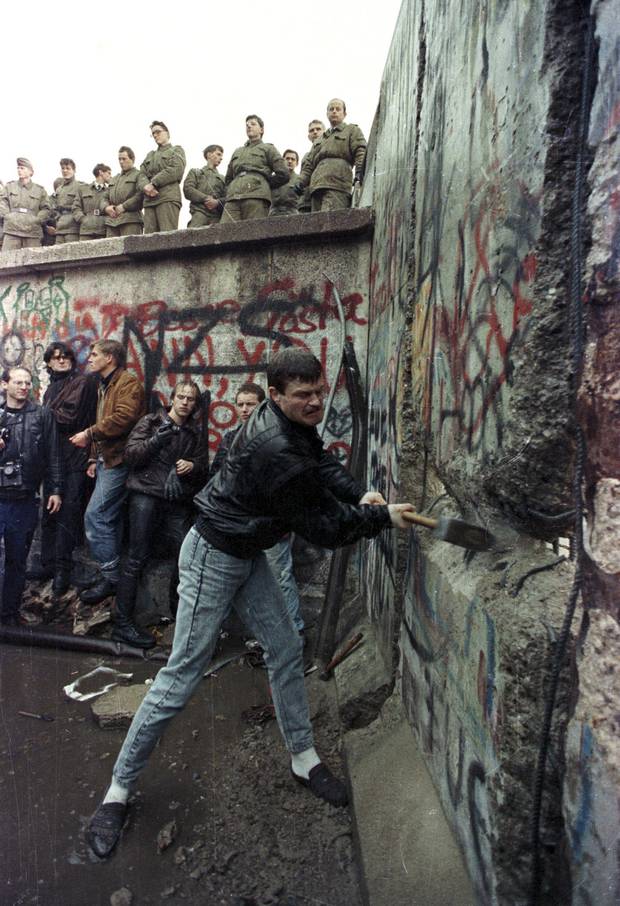 The fall of the Berlin Wall. Independent.ie

But moving as those scenes were, and happy to so many in their recollections, a history-based, sterner evaluation awakens doubts that, despite the paeans in the world media, this was not purely  a peaceful  revolution, a choice of freedom by the masses, another successful victory for freedom and justice  as in past centuries. We recall that even revolutions are complex, that the American Revolution was followed by Shay‘s Rebellion, a bolstering of slavery and a bloody six year war which forced most Indians from Ohio. The short era of Robespierre meant almost a year in prison for Tom Paine. And enthusiastic crowds can also make very false judgments.

East Germans soon learned that freedom of the press was for those who owned the presses, that freedom of speech helped most those who ruled over studios and cable connections. Most tellingly, they learned very quickly that those 100 West-marks were soon spent and new ones, for all those glistening commodities and travels, had somehow to be earned, while over 95 % of the industry they had built up was taken over by Westerners and, robbed of any machinery of value, for the most part shut down. It was now very simple to move westwards; several million did, now not for freedom, consumer goods or better-paid jobs but for any job at all. Professors, teachers, scientists, journalists, administrators at every level were thrown out, replaced by second and third string West Germans who were certain they could do everything better – and got “bush bonuses“ for making the sacrifice of taking over East Germany. For workers, the wage level is still below that in the West, while jobless figures and the work week  for those now finding a job are both above the figures in the West.

The victory thirty years ago brought other changes. The old GDR had, until the end, no drug problem, almost no AIDS, no organized crime, no school shootings, none of the free food pantries now so prevalent, since people n the GDR, while lacking food items like oranges, bananas and other southern imports, all had enough to eat. Nor was there anyone in those years begging or sleeping in the streets, since there were always jobs a-plenty and evictions were illegal. So was any discrimination against women, who got equal pay, at least a half-year paid maternal leave, free abortions, cheap summer vacations and summer camps, and one paid day off a month for household duties. 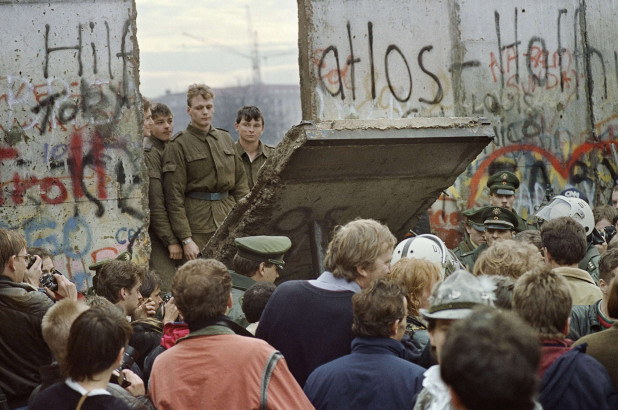 Oh yes, there were blunders a-plenty, stupidity, careerism, dogmatism. Envy and greed could not be eradicated  from the human soul, but with almost no feverish competition they were lessened, as the polls found. True, where people gained positions of power they were as capable of misusing it as elsewhere. Nor could all the remnants of fascist poison be erased from 16 million heads in one or two generations. But they were forbidden – and those with racist thoughts and prejudices kept them to themselves or within their closest circles, while truly masterful films, books and plays endeavored to combat them. Today, Nazi thugs march every weekend, and the pro-fascist Alternative for Germany party has 94 seats in the Bundestag and won second place in three state elections.

Here we hit on the main problem with the breaking down of the Berlin Wall. The GDR had thrown out – lock, stock and barrel – all the giant cartels and monopolies which profited from World War One, built up Hitler when, during the Depression, working people became rebellious, then earned billions from slave labor during World War Two and, after 1945,  regained immense wealth and power. In the West! Bayer and BASF, major perpetrators of Auschwitz, are on top of the chemical pile, world-wide now with Monsanto. Powerful old fascist fat cats like Daimler (Mercedes) and Quandt (BMW) are cheating the environmentalists, Rheinmetall and Heckler & Co. are again making billions with their tanks and guns and missiles. All their properties were confiscated by the GDR – which is why they hated it and conspired against it, successfully. Also because the GDR, as opposed to its rival in Bonn, supported the Algerians in their fight for freedom, Allende against the Pinochets, Mandela and the ANC and SWAPO, Ho Chi Minh in Vietnam and freedom fighters from Nicaragua to Aden.

The very existence of the GDR represented a barrier against further expansion by the Bayers with their control of ever more seed sources and their destruction of natural life, from frogs and butterflies to orchids, cacti and rain forests, but also against weapon+ makers who desire nothing more than further world  tension, especially with Russia and China, the two main remaining barriers to world hegemony of the billionaires. They demand the use and replacement of their products. After 1945 and until 1990 no uniformed Germans were shooting presumed enemies anywhere in the world. With  the GDR out of the way the Bundeswehr flew missions and dropped bombs in the mountains of Afghanistan and trained soldiers in the desert sands of Mali – after beginning by bombing Serbia, repeating  Germany‘s crimes in two world wars.

United Germany’s Minister of Defense, who hopes to become chancellor, has demanded that Germany play a far bigger role in today’s world – and plans a big build-up of weapons to achieve this. She has found smiling support from Secretary of State Pompeo, who came to Berlin and joined in the hallelujahs for the victory of democracy thirty years earlier.  Yes, Pompeo!

The GDR had countless  faults and limitations, caused by poor leadership – mostly aged anti-fascist fighters, trying to save the endeavor to achieve socialism in at least this small corner of Germany, but overtaken by modern developments and never able to find rapport with large sections of a vacillating population tempted by daily TV images of a wonderful world in the Golden West, which had been built up to become one of the world’s richest countries. The GDR was battered by a world of problems from all sides, domestic and foreign, pressured into “arming itself to death”  militarily, limited by the giant costs of the new electronic, computer age, with no help from the east and a boycott by the west, plus its giant humanitarian project – supplying good, modern homes for everyone while keeping rents to about one tenth of income.

In the end the odds were against it. But just as a World Series victory by the Washington Nationals did not mean that team was morally better but simply that at the time it was stronger, the defeat of the GDR did not mean that the system it was trying to develop, strengthen and improve – socialism – was proven false by its defeat.

The opening of the Berlin War was seen then and is still regarded by many as a wonderful victory. Looking around today’s deteriorating situation in Germany and much of Europe, with fascist movements on the rise and world-destroying weapons deployed and maneuvering dangerously, one might well recall the words of the Greek general Pyrrhus. After beating the Romans in the Battle of Asculum in 279 BCE, but with terrible losses for his own troops, he is quoted as saying:

“Another such victory and we are lost!”

Victor Grossman, born in NYC, fled McCarthy-era menaces as a young draftee, landed in East Germany where he observed the rise and fall of its German Democratic Republic (GDR). He has described his own life in his autobiography Crossing the River: A Memoir of the American Left, the Cold War, and Life in East Germany (University of Massachusetts Press, 2003), and analyzed the GDR and questions of capitalism and socialism in Germany and the USA, with his provocative conclusions, along with humor, irony and occasional sarcasm in all directions, in A Socialist Defector: From Harvard to Karl-Marx-Allee (New York: Monthly Review Press). His address is wechsler_grossman [at] yahoo.de (also for a free sub to the Berlin Bulletins sent out by MR Online).