“We Refuse to be Burned”: 500 Years of Resistance, Colonization, and Coups in Bolivia 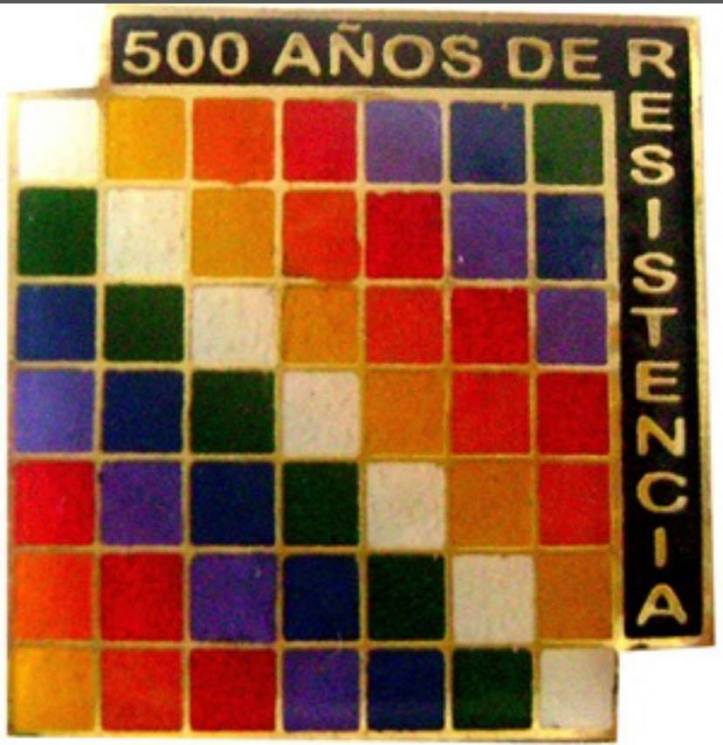 A Wiphala flag pin that reads “500 years of resistance”

18 Nov 2019 – I am writing this because I don’t see many Bolivian voices represented in the media. Here is my story.

I saw Evo Morales speak once in La Paz. So many people came out. The boys climbed trees to trying to get a glimpse of him. After each speech, there was a translation in Quechua and Aymara.

My father worked for Evo’s campaign. He and my aunt traveled from village to village explaining to people in Quechua the importance of voting and of a socialist government. The people voted because they believed in change.

Evo was the first democratically elected Indigenous president of a nation that has the highest percent of Indigenous people in all of South America. He gave people hope, and he made people believe Indigenous people can be leaders and teachers, and that we can be taken serious, too. That’s why he is so precious to us.

Bolivia is located in the heart of South America. There are 36 Indigenous languages spoken, and the two main ones are Quechua and Aymara. On my father’s side we are Quechua and my grandmother, like 10 million other Bolivians, spoke Runasimi, Quechua. She passed away without ever learning the Spanish language. Like a majority of Bolivians, we identify first as Quechua and then as Bolivian.

Bolivia is a very rich country, especially in minerals. There are tin, silver, gold, dismuth, zinc, and iron reserves. Oil and gas are the main forms of resource exploitation. Before the nationalization of the gas fields, there were three main industrialists: Simon Patiño, Mortiz Hochschild, and Carlos Aramayo. Simon Patiño had accumulated so much wealth they even nicknamed him the “Andean Rockefeller.”

I wondered, with all this resource wealth, how did Bolivia get be so poor? How did it get to be the second poorest nation in the Western Hemisphere next to Haiti?

Like many Indigenous Bolivians, I come from a family of miners. My grandfather was a miner in the town of Pulacayo, which was the location of one of the biggest miner uprisings in the early 1940s. In the 1978 book Let Me Speak!, Bolivian feminist, Indigenous rights activist, and wife of a miner, Domitila Chungara, recalls one of the great leaders of her time explaining to her and other miner union workers, the situation in Bolivia:

Compañeros, the ten thousand workers of Siglo XX produce 300 or 400 tons of tin per month.” He says. She recalls him taking out a sheet of paper that represented everything miners produce. Then tearing the sheet of paper into five equal parts, he says that out of these five equal parts, four go to foreign capitalists, while Bolivia keeps one part. Then he takes the last tear of paper and says, “Now this fifth part is also distributed according to the system in which we live, so the government takes almost half for transportation, customs, and export expenses, which is another way to make the capitalist earn a profit. Then the government again grabs some for its own benefit, for the armed forces, the salaries of the ministers and their trips abroad. And they invest money in foreign cities, so that when they fall from power then they can go to another country as millionaires. And the little bit that’s left over is for social security, for health, and for hospitals.

This is the history of Bolivia, a country whose riches are stolen for the benefit of others.. When Evo Morales won the presidency in 2009, it changed the course of history for Bolivia and the lives of Bolivia’s poorest. He was the first democratically-elected Indigenous president. Out of 527 years of settler colonial occupation, Evo Morales gave Bolivia 13 years and nine months of Indigenous leadership—until he was deposed by an unlawful coup led by the old oligarchy.

For the first time in 2009 Bolivia was officially secular, recognizing indigenous spiritual beliefs. Now that Evo has been forced to step down, opposition leaders are bringing back their Catholic bibles and under the name of God sending military forces to violent attack and oppress indigenous people.  The day after Jeanine Añez appointed herself interim president, police in riot gear fired tear gas to disperse a large crowd of protesters, as fighter jets flew low overhead. Añez came to power like so many before — with a sword in one hand and bible in the other. The thousands taking to the streets under Wiphala flags do so against a president who has admitted on her Twitter of dreaming of a Bolivia free  from indigenous “satanic rites.”

Evo’s  support doesn’t come from the city or the middle classes who voted for Carlos Mesa, Bolivia’s former president infamously known for ordering brutal crackdowns against protest that left 60 dead, during the so-called “gas wars.” Evo’s base is from the cocaleros and campesinos. He himself a cocalero, someone who grows the sacred indigenous coca leaf plant.

The coup against Evo comes after the uprisings against Sebastian Piñera in Chile, the uprising against the IMF Austerity package in Ecuador and uprisings against the ring wing racist government in Brazil. So when the Bolivians raise their Wiphalas, the flag that represents the four Suyus — or the four corners of South America (Chinchawuyu, Antisuyu, Cuntisuyu, and Collasuyu) altogether composing Tawantinsuyu — they are definitely not alone.

I recently spoke with my sister Cecilia Lazzaro, who is studying in Buenos Aires, Argentina.  “On Monday thousands of Argentines marched from the Obelisco to the Bolivian embassy,” she said. t Everyone was upset, she told me. To her, there are similarities betweenBolivia recently and  what happened on March 24, 1976 in Argentina, when the armed forces ousted Isabel Peron, were frightening. She said at that time the two main newspapers in Argentina, La Nacion y Clarin framed what was happening not as a coup: “They didn’t use the word coup.”This same language is now being used to describe what is going on in Bolivia. “Evo was leaving office,” the headline read.

We should challenge what the Western media is telling us. It makes sense that the United States would denounce Morales under the name of “democracy,” because they want Bolivia open for business. And just as the Spanish conquistadors enslaved Indigenous people to profit off of gold using religion as an excuse, the new Bolivian oligarchy will do the same with lithium and the country’s natural resources.

When my father was a young boy, my grandfather was part of the miners revolution in Pulacayo, a mining town where miners fought for better working conditions. My father told me that when Evo was first elected in 2006, the dream of my grandfather and all those miners from Pulacayo came true. It was the first time he felt change was possible.“I cried,” he said, “because if my grandfather was still alive, I knew he would be happy right now, too, because Indigenous people can be heard now. “

After Evo’s coup, I am most worried about the open racism. It is a similar feeling I had when Trump was elected in the United States. I see videos online of the police and those from the opposition parties burning the wiphala flag; and it hurts me because this is a hate crime, it is a racist act. When I talked to my father about what the burning of the flag means for us Indigenous people, he says,

We refuse to be burned.