Hong Kong Is Scared – of the Rioters 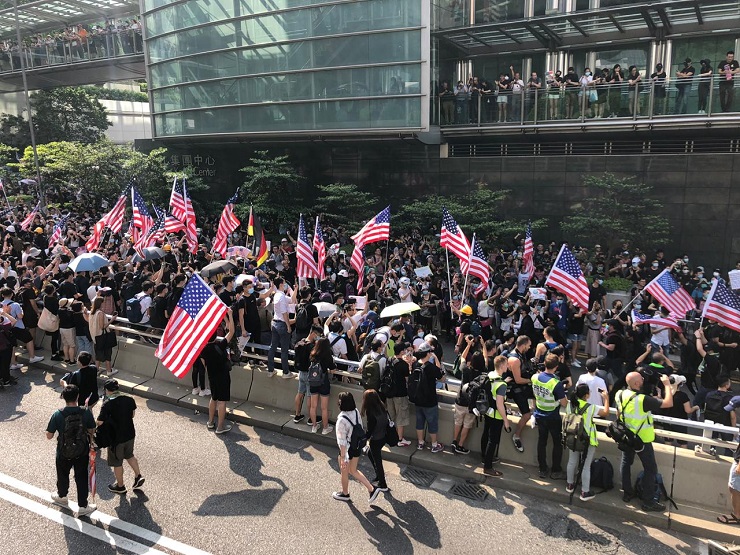 It was once a British police station, as well as the Victoria Prison Compound. Hong Kong inhabitants used to tremble just from hearing its name mentioned. This is where people were detained, interrogated, humiliated, tortured and disappeared.

Now, after Hong Kong ‘returned to China’, it was converted into the Tai Kwun Center – one of the biggest and the most vibrant art institutions in Asia.

This transformation was symbolic, the same as the conversion of the former British-era slums into public parks has been symbolic.

But now, as the pro-Western and anti-Chinese treasonous hooligans are dividing and ruining this former U.K. colony, the old-colonialist flags of “British Hong Kong” are being waved alongside the flags of the United States, while Chinese flags are being humiliated, and thrown into the bay.

Rioters seem to remember nothing about those ‘good old times’ (according to them), when signs shamelessly declared: “No Dogs and Chinese”. As they seem to close both eyes and ignore the neo-colonialism and massacres, that both North America and Europe are constantly committing in all corners of the world.

Now, the citizens of Hong Kong are scared. Not of the “government”, not of the police, or Beijing: they are frightened of the so-called protesters, of ninja-like looking young people with covered faces and metal bars in their hands.

Mr. Edmond, who works for the Tai Kwun Center, speaks bitterly about the events in his city:

“What is truly scary now, is that families here in HK are deeply divided. Father does not talk to his son. Silence reigns inside the families. Colleagues do not touch the subject of riots. The situation is thoroughly ruining our city, our society, our families.”

“If someone publicly disagrees with the protesters, they get beaten. They managed to silence people.”

“People come here, to this wonderful art center, and if they are from Beijing, they are now hiding their identity. It is because they are scared.”

Mr. Edmond keeps repeating that “disagreements should be like disputes inside the family”. He means, disagreements between the Hong Kong inhabitants, and Beijing. According to him, the outsiders should not be involved.

This is what the majority of the people feels in Hong Kong now. This is what they felt in 2014, when I wrote about another prolonged and destructive event which was sponsored by the West – the so-called “Umbrella” uprising.

They feel this, but most of them would not dare to express it. The rioters are young, in good physical shape, and armed with sticks and bars. They have no identity, as their faces are covered by scarves. They are drunk on fanatical self-righteousness; stoned on a primitive sense of purpose. Their behavior is not rational – it is religious.

I have been talking to them. In 2014, and now. Most of them know nothing about the foreign policy of the West. They have no clue about the brutality of the British Empire. They do not want to hear about the humiliation and pain of the Chinese people, when their country was invaded, broken into pieces and occupied.

They are selfish; grandstanders, and extremely arrogant.

They wave flags; foreign flags. They spit on their own banners. They do what they are told to do: by the hostile, foreign powers. And they do, what they are paid to do. It is as depressing, as it is embarrassing, to watch.

It is very hard to talk to them. I tried. Most of them do not want to uncover their faces, and to speak. They seem to feel secure only when in packs, in multitudes. When challenged, they reveal that they know very little, even about China; or even about Hong Kong itself.

But they are ready to preach; to lecture.

When faced with logical arguments, which they cannot refute, they become brutal.

Just a few days ago, they attacked a local teacher who was singing the national anthem of China. They beat him up. A child witnessing the event was horrified. He cried. The teacher kept singing.

Whenever I manage to have longer exchanges with them, it somehow feels the same as when I am confronting religious fanatics in the Middle East. Perhaps, it should not even be surprising, as both are products of the Western propagandists and their allies.

People refusing to accept their leaflets at the airport –get beaten. If visitors to shopping centers challenge the rioters – a public beating takes place.

This covering of faces with black scarves would be illegal in many parts of the West, were the black scarves to be worn by, let’s say, Muslim women, or local rioters. But the Western media, outrageously selective in its coverage, is glorifying it here, simply because it is against the interests of the People’s Republic of China.

Chinese people, with thousands of years of culture, mostly tolerant, are not used to all this. These events of the last three months are something extremely foreign to them. Therefore, many are scared. Very scared. Desperate.

Ninjas of this nature are usually jumping and hitting in all directions, but from the screens of television sets, not right in the middle of the streets. 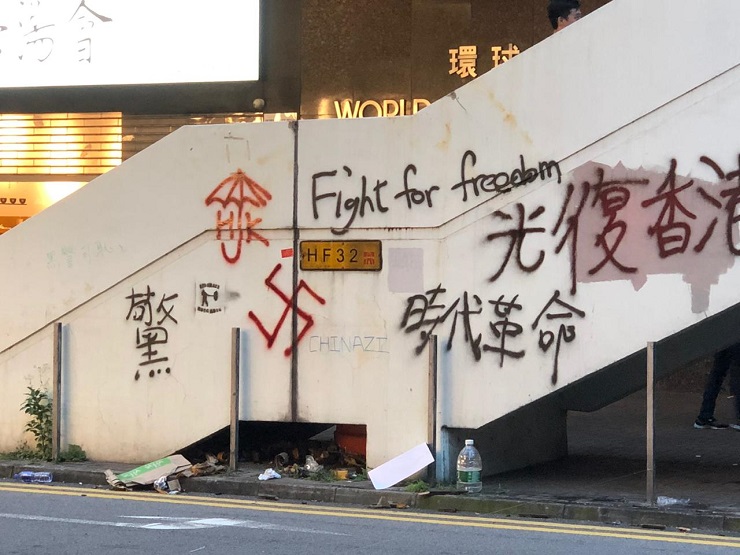 As I am filming in Hong Kong, as I am reporting for television stations, the picture is becoming clearer and clearer.

There are U.S. flags being carried, the U.S. anthem is sung, then immediately, hundreds of Western media crews start filming.

But when public property is being damaged, subway stations vandalized, pedestrians and motorists attacked, Western cameras are nowhere in sight.

If rioters were to trash Heathrow Airport in London, the army would be called, immediately. Here, the rioters are cheered on by foreigners.

It is obvious that Western mass media outlets and the rioters are working hand-in-hand. They have the same goals.

Fear is mixed with shame. No one in Hong Kong is speaking openly, on the record. Even on such seemingly ‘innocent’ topics like the collapse of tourism.

Those who are destroying the city, are obviously not willing to take responsibility for the hardship they are causing to its citizens.

Those who are with Beijing, those who believe in “one China”, which is the silent majority of the citizens, feel shame, because there are so many traitors living among them, in one overcrowded urban area.

Everyone here in Hong Kong and in Mainland China, understands how dangerous the situation really is. Leaders of the riots, like Joshua Wong, are groomed by Washington, London and Berlin. They are morally and financially supported, not unlike people like Guaido in Venezuela. Mr. Wong is known to associate himself with organizations such as the “White Helmets”, which is working on behalf of the West for “regime change” in Syria.

To damage, to break China into pieces, is now the main goal of Western foreign policy. Beijing is being attacked on all fronts: Uyghurs, the Belt and Road Initiative, Taiwan, Tibet, South China Sea, trade. The more successful China gets; the more attacks it has to face.

Hong Kong used to be a city where “streets were paved with gold”, according to the legend. Mainland Chinese used to see it as a semi-paradise. All this has changed, reversed now. Neighboring cities like Shenzhen and Guangzhou, count with much better infrastructure, a greater cultural life, and lesser levels of poverty.

In one of the international hotels of Hong Kong, I was told by a manager:

“Mainland Chinese people do not see Hong Kong as something attractive, anymore. They do not travel here often, anymore. They are not treated well here. They go to Thailand or to Europe instead.”

The citizens of Hong Kong feel frustrated and angry. Their “uniqueness” is evaporating. They are being left behind. Poverty rates are high. English language proficiency is declining, and businesses are moving to Singapore. Hong Kong is the most expensive city on earth, and it is unaffordable for most of its citizens.

Extreme capitalism here has brought nothing spectacular to the people. It is increasingly obvious that the Communist (or call it “socialism with the Chinese characteristics”) system has become much more successful than the old British-style neo-liberalism; in terms of social policies, infrastructure, the arts and general quality of life.

The spoiled, egotistical young people of Hong Kong are outraged. What? They are suddenly not on top of the world? The Commies across the line are better at almost everything they touch?

Instead of working harder, they turn against China; against the Mainland.

They want to convince the entire Hong Kong and even the Mainland, that the ‘Hong Kong way’ is the only correct way. And of course, there is plenty of funding available to support their insane claims. The funding comes from the fellow-collapsing societies – those in the West.

Most of the citizens of Hong Kong are scared that the rioters may succeed.

They have already forced the withdrawal of the Extradition Bill, which could help Hong Kong to fight the endemic corruption and invulnerability of its business elites.

They have already managed to scare the Hong Kong government into compromises.

The rioters are acting like huge, violent gangs, and they are enjoying full propaganda support from the West.

But whether they like it or not, Hong Kong is China. Ask a grocery vendor at North Point, ask coolies, old ladies on a park bench, or an elementary school teacher, and you will understand. These people do not care whether Hong Kong is exceptional or not. They do not need to show-off. They just want to live, to survive, to look forward to a better future.

And a better future is definitely with Beijing, not with Washington or London.

They already had London. They had enough of it.

“More Beijing, not less”, you would hear if people were not scared to talk. In 2014, when things were not as extreme as now, they used to tell me.

Now, it is not easy to fight the hundreds of thousands of face-covering and metal-bar-waving zealots and fanatics. Their religion is simply “The West”. It is abstract. As are their demands. As are their violent outbursts of inferiority complexes.

Both, the local majority, and Beijing, have to think hard as to what strategy to apply, in order to protect, and to defend Hong Kong and China against those brutal, frustrated, morally corrupt hooligans and treasonous cadres.

Andre Vltchek is a philosopher, novelist, filmmaker and investigative journalist. He covered wars and conflicts in dozens of countries. His latest books are: “Exposing Lies Of The Empire” and “Fighting Against Western Imperialism”. Discussion with Noam Chomsky: On Western Terrorism. Point of No Return is his critically acclaimed political novel. Oceania – a book on Western imperialism in the South Pacific. His provocative book about Indonesia: “Indonesia – The Archipelago of Fear”. Andre is making films for teleSUR and Press TV. After living for many years in Latin America and Oceania, Vltchek presently resides and works in East Asia and the Middle East. He can be reached through his Email: andre.vltchek.readers@gmail.com or his Twitter. Website: http://andrevltchek.weebly.com/