The suffering of people wounded in conflict zones is being compounded by what doctors say are ‘horrifying levels’ of antibiotic resistance. 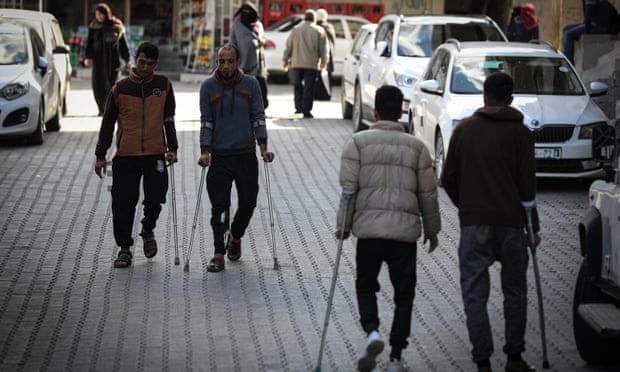 MSF say 83% of patients seen in Gaza have infections, which complicates the treatment of fractures. Photograph: Loay Ayyoub/The Guardian

5 Dec 2019 – When Jihad Nasser arrived at al-Awda trauma clinic in Gaza, he was hoping doctors could finally stop his pain. A gunshot wound in his right leg had not been not healing properly. The news, however, was bad.

The complex bone fracture he had suffered was badly infected with MRSA. Doctors told him it would not respond to treatment and they would need to amputate.

“I thought about suicide several times,” says Nasser, 28, a former blacksmith. “I was wishing the Israeli soldier [who shot me] had killed me with the bullet.”

Nasser refused to consent to amputation and is now on his second round of a six-week course of Vancomycin, a last-resort antibiotic for fighting MRSA.

Infection rates are high in conflict zones, where bullets or other debris often pierce the skin and treatment is delayed or inadequate. Now, doctors from Médecins San Frontières face a further complication to recovery rates: “horrifying levels” of antibiotic resistance in its trauma clinics across the Middle East.

“There are patients from Iraq, Yemen, Palestine and Syria where they have had acute injury as a result of conflict and they have had inadequate follow-up,” says Clair Mills, one of MSF’s medical directors. “These are patients with fractures that have never healed, or with chronic nerve injuries from burns. Where people have injuries to bone, the majority are coming in with antibiotic-resistant organisms.”

In Gaza, the number of Palestinians shot by Israeli forces in clashes at the border since protests began on 30 March 2018 has declined significantly since May, when 6,000 people were killed or injured.

Last year, MSF tripled its capacity in Gaza because it was believed that most patients might be suffering from multi-resistant organisms like MRSA.Until April, however, doctors lacked the specialised labs to test their theory. 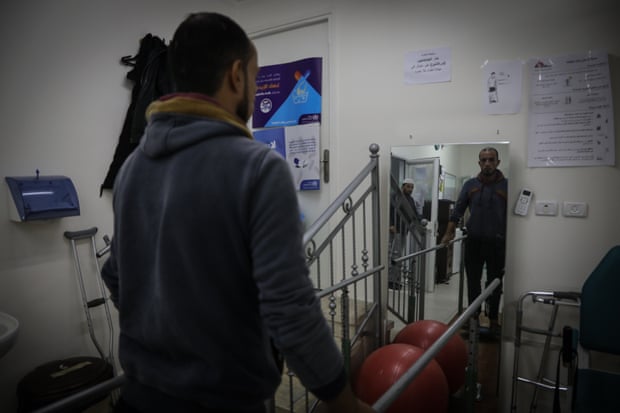 Since then, bone and tissue biopsies have shown that 83% of patients seen by MSF in Gaza have infections. Of those with infections, 62% have multi-resistant organisms like MRSA.

Such infections further complicate the treatment of complex fractures. Patients must be isolated, which takes a huge psychological toll.

Dr Mohammed Abu Mughaiseeb, of MSF in Gaza, says: “Infections of the bone are very difficult. The micro-organism is embedded within the bone. These patients will have to have three to five surgeries over three years to fix the injury. Many of them need to be isolated in a special room with special precautions for patients and for workers.

“If patients are not treated properly, they could end up with amputation. It is a very sensitive topic.”

No one can enter the isolation unit of al-Awda hospital without wearing scrubs. Nasser’s room has two beds and a TV. One of the beds is for visitors but he hasn’t had any, he says. The injury has taken a toll on his relationships as well as his earnings. He now receives a small amount from a Qatari charity, which has been helping those injured during the protests.

“I feel pain all the time, the pain doesn’t stop,” says Nasser. “I went through a difficult time psychologically as a result of the injury. My relationship with my family is bad. I thought about suicide many times. I was depressed. I went to the border many times and got close to the fence, but I wasn’t shot.”

Before coming to the trauma clinic, Nasser spent nine weeks in intensive care at a health ministry hospital. MSF doctors stopped him killing himself, he says. “Now I wish to be healed and return to normal life.”

In Gaza, antibiotics are available over the counter at pharmacies without a prescription. This leads to misuse, with the drugs frequently used when they are not needed, treatment courses not completed, or inadequate doses taken – all of which increase the risk of bacteria developing resistance.

In addition, Gaza’s health system has been weakened by a decade of blockades and lacks good quality antibiotics and adequate surveillance. 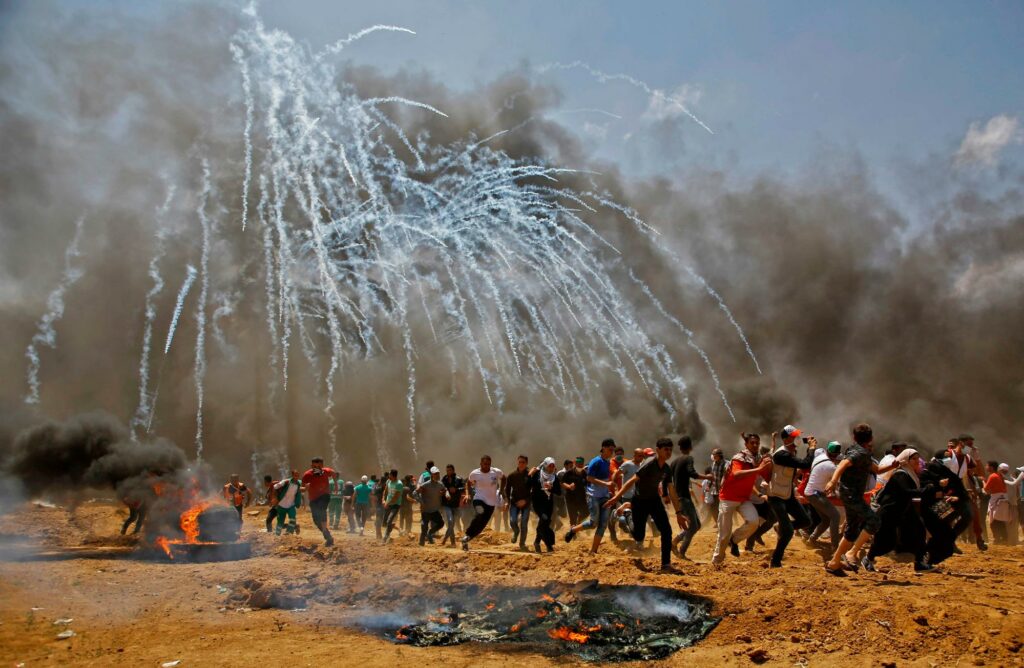 Read more: Gaza border protests: 190 killed and 28,000 injured in a year of bloodshed

Dr Mohammed Barayka, an antibiotic specialist at the al-Awda hospital, says patients are tested if they are suspected of having antimicrobial resistance.

“When doctors feel the patient suffers from constant pain, the wound does not heal and there’s fever at night, we do a bone biopsy,” he says. “We used to send the samples to a lab in Tel Aviv, Israel but now we send them to a health ministry hospital in Gaza. We get the results after five to seven days.”

In the majority of cases the tests are positive, he says. “MRSA is widespread in the Gaza strip.

“We had one case of a 17-year-old boy who had received the protocol three times, but his body didn’t heal the wounds and he lost his leg.”

At least 170 Palestinians became permanently disabled as a result of gunshot wounds in the first year of the border protests, mainly due to amputation, according to World Health Organization data. 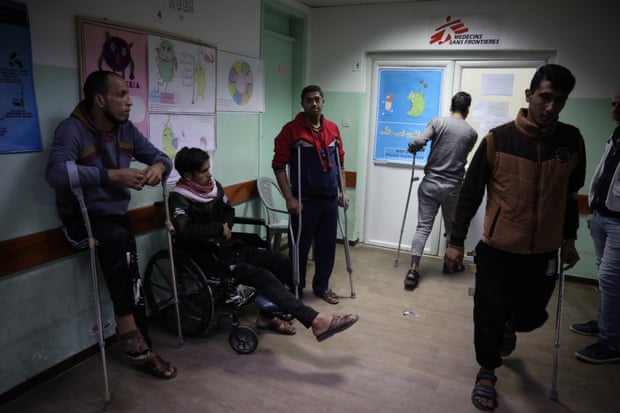 Some suffer such physical and psychological pain that they go to the border in the hope of being shot, says psychologist Mohamoud Awad.
Photograph: Loay Ayyoub/The Guardian

Mohamoud Awad, a psychologist, says some suffer such physical and psychological pain that they go to the border of Gaza and Israel, in hope of being shot dead by an Israeli sniper.

“Every injury causes trauma to the patients and it depends on each one and the support they receive,” says Awad. “They become nervous. They talk to us constantly about family problems. Their financial problems get worse after injury. Many complain that friends have been cured of their injuries but they are still infected. They become frustrated … whether it’s isolation or mental illness, many have lost hope and say the future is very dark.

“I do not have any accurate statistics on cases of attempted suicide, because there have been cases outside the clinic and some of them in a non-traditional way (returning to the border and approaching the fence), but there are certainly attempts.”

Karen McVeigh has been a senior news reporter for the Guardian since December 2006. Before that, she freelanced for the Times following a five-year stint as The Scotsman’s London correspondent.