Indian Democracy Is Fighting Back

The protesters are trying to save a liberal India—and keep bigotry from becoming the law of the country. 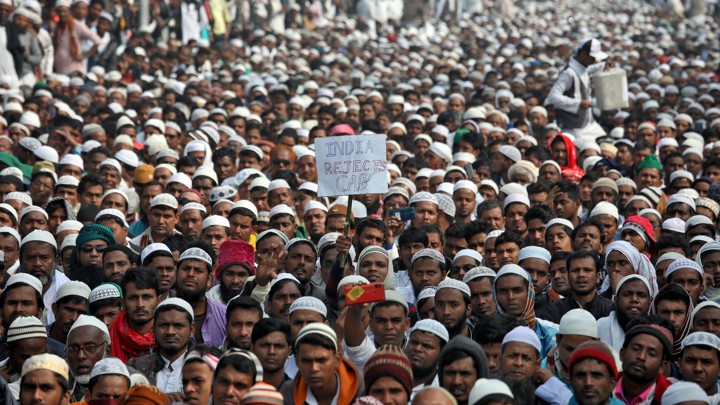 24 Dec 2019 – For nearly three weeks now, India has quaked with protest: crowds that have increased by the day, milling in the avenues and parks and on the university campuses of the cities, nursing a seismic fury but keeping largely peaceful despite it. The sprees of violence have come courtesy of the government. In Delhi, where Prime Minister Narendra Modi’s home minister controls law and order, and in other states ruled by his party, the police have displayed an old, familiar brutality. They’ve hit marchers with heavy wooden staves. They’ve tear-gassed a university library. They’ve detained people—even minors—in a police station and then refused to allow lawyers in to represent them. In Uttar Pradesh, a state of more than 200 million people, a blanket ban on public assembly was imposed, and the internet was shut off. How would people coordinate a protest without WhatsApp?, the government reasoned, as if public demonstrations were a product of the 21st century.

Protests have occurred nonetheless, and the police have used them as an excuse to shoot and pillage. Twenty-five people have died, and hundreds have been arrested. The state has confiscated property without an iota of due process, and raided homes to smash up their contents. A 74-year-old man who was held in a police station last Friday night told the Indian Express that he heard screams all night.

What Actually Happened in Kashmir? by Samanth Subramanian

The violence turns the stomach and harrows the mind. The protests, though—they’ve become the brightest moment for Indian democracy in years.

The immediate cue for these events was the passage of a new law. On December 11, India’s Parliament decided that persecuted minorities fleeing three nations in the neighborhood—Pakistan, Bangladesh, and Afghanistan—will be fast-tracked into citizenship. The minorities were punctiliously listed: “Hindus, Sikhs, Buddhists, Jains, Parsis, and Christians”—members of every major faith in South Asia except Muslims. The law was framed as an act of benevolence. In fact, it was an act of pointed exclusion, an explicit announcement of who belongs in India and who does not. Modi’s party, the Bharatiya Janata Party (BJP), has never hidden its first order of business: to turn India from a secular state into a Hindu nation. In practice, that has translated into an overt loathing for 182 million Muslims, the country’s largest religious minority. This citizenship law, enshrining discrimination, gave that hatred flesh and form.

Around the world, advocates for the liberal order find ourselves in a moment when every crisis feels existential, bound either to preserve or destroy our various republics. In some cases, perhaps that is an overheated fear. Not in India. The BJP’s bigotry imperils the Indian constitution—not just the document that defines India’s soul, but the very substance of its demography. The party is daring Indians to choose what they want India to be.

Read: India’s lynching epidemic and the problem with blaming tech

One answer to this question was agreed upon soon after India rid itself of the British in 1947. The first generation of Indian leaders wanted their country to be a liberal democracy, in which a person’s faith—or language, or caste, or gender—didn’t earn her better or worse treatment by the state. The ambition of this project has always been evident. To knit an enormous, poor, multireligious, polyglot territory into a modern nation required near-reckless trust in the strength of the liberal ideal. It was as if the tailor of the very first parachute had resolved to test it by stepping out of a plane at 60,000 feet. Not surprisingly, there were occasions when the experiment felt too huge, too unviable. Jawaharlal Nehru, India’s first prime minister, harbored the anxiety that the country would turn fissile and balkanize. B. R. Ambedkar, the chief drafter of the constitution, worried that “saturating” India with constitutional morality would prove too difficult. In a land full of inequities, this species of morality wasn’t a natural sentiment, he believed. “Our people have yet to learn it,” Ambedkar once said. “Democracy in India is only a top-dressing on Indian soil, which is essentially undemocratic.”

Improbably, the sapling took root in this soil and, for decades, seemed to hold together. To be sure, Indian democracy suffered its imperfections. Parties carved up the electorate along the axes of religion and caste, playing severe games of identity politics. India held itself together with violence, repressing dissidence in Kashmir or the northeast or tribal territories. The political culture grew corrupt. Once, in 1975, a declared emergency suspended democracy for two years. Time after time, religious riots tore gashes in the fabric of the nation. But despite it all, the basic compact of 1947—that India would be a country that accommodated everyone without prejudice—appeared to endure.

To those who treasured that vision of India, things changed in May. There had been a prelude: the election of Modi as prime minister in 2014, when his reputation as a Hindu-nationalist right-winger had already been established. His infamy for failing to stop—or perhaps even endorsing—horrific anti-Muslim pogroms during his chief ministership of the state of Gujarat in 2002 had spread far. It seemed inconceivable that voters would give the nation’s highest office to a man who spat so viciously upon the Indian ideal. Over the next five years, India became a country where lynch mobs could hunt and kill Muslims with impunity; where Yogi Adityanath, a Hindu monk with a record of inciting religious violence, could become chief minister of Uttar Pradesh; and where history, education, and culture were distorted to advance the cause of Hindu fundamentalism. Then, more inconceivably still, as India’s economy melted and its society frayed, Modi was reelected in May, his mandate even larger than before.

That moment, and the moments that followed, as the BJP rapidly enacted items on its poisonous agenda, felt full of despair. The government revoked the constitutional status of Kashmir, placed the politicians there under indefinite house arrest, and switched off the internet. The Indian public at large didn’t appear to care. A Supreme Court seen as pliant ruled that Hindu mobs had destroyed a mosque illegally back in 1992—but that the land should still be handed to Hindu organizations, because their beliefs demanded a temple there. No agitations churned the streets. Was it possible that, after all these decades, secular liberalism remained an elite infatuation? That these principles, imposed in 1947 and indulged by Indians out of a sense of inertia, didn’t actually mean very much to most people? A friend of mine, a former magazine editor, told The New Yorker earlier this month of his suspicion that “India is becoming the country it has always wanted to be.” The top-dressing hadn’t seeped into the soil.

The protesters of December 2019 have provided solace at last. They’ve been numerous, and diverse, and distributed right across the sprawl of India. No one has choreographed them; no one has borrowed their anger for smaller, self-serving political needs. They’ve absorbed the ruthlessness of the police and come back for more, hoping in some way to trip up the advance of Hindu nationalism. The past few years show us, of course, that all these protests may come to nothing. Modi has a parliamentary majority for four and a half more years, and his party may be able to persuade enough voters to keep it in power. But at the tail end of this ghastly decade, it’s buoying to be among these protesters, or to watch them, or to read about them. The sapling is still standing. The soil is resisting.

Samanth Subramanian is a writer and journalist. His third book, A Dominant Character: The Radical Science and Restless Politics of JBS Haldane, will be published by W. W. Norton in July 2020.