Joaquin Phoenix Is PETA’s 2019 Person of the Year: Kind and Committed

People for the Ethical Treatment of Animals – TRANSCEND Media Service

Standing in the spotlight doesn’t interest Joaquin Phoenix. As the buzz, critical acclaim, and Oscar talk surrounding his performance in Joker swirl, he’s been steadfastly ensuring that the spotlight is on what he cares about most deeply: animal liberation. His lifelong dedication to ending speciesism has brought him another award: He’s PETA’s 2019 Person of the Year. 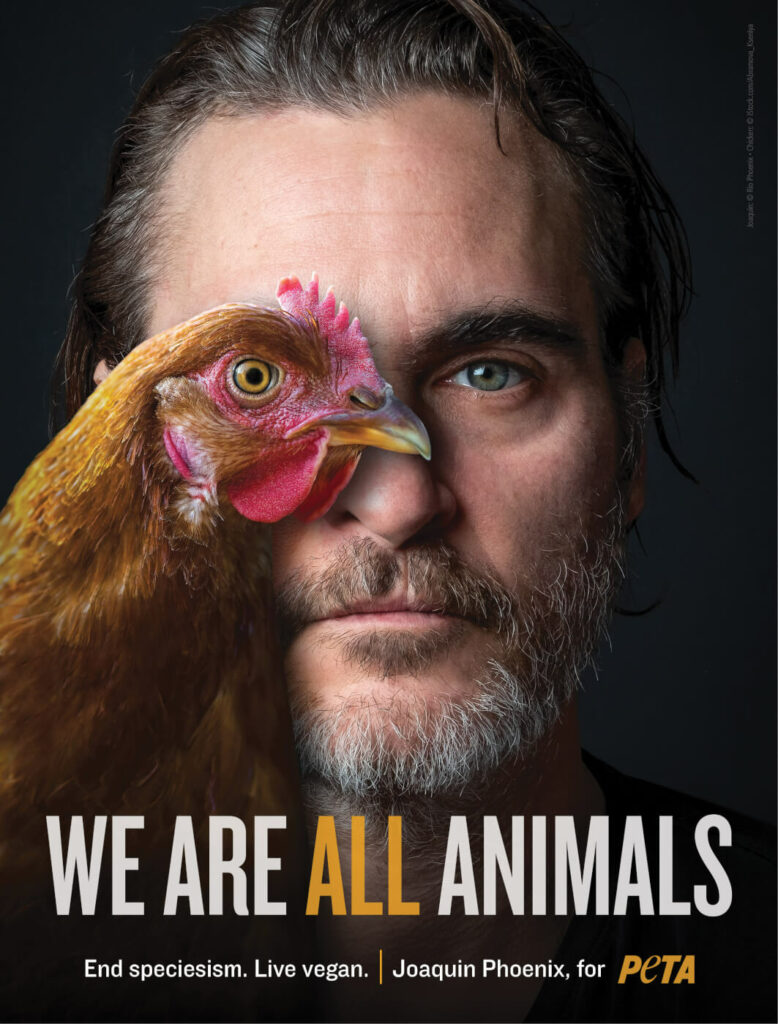 Just before the Joker premier, Joaquin’s compelling anti-speciesism ad with PETA went up in Times Square and on Sunset Boulevard, proclaiming, “We Are All Animals.” 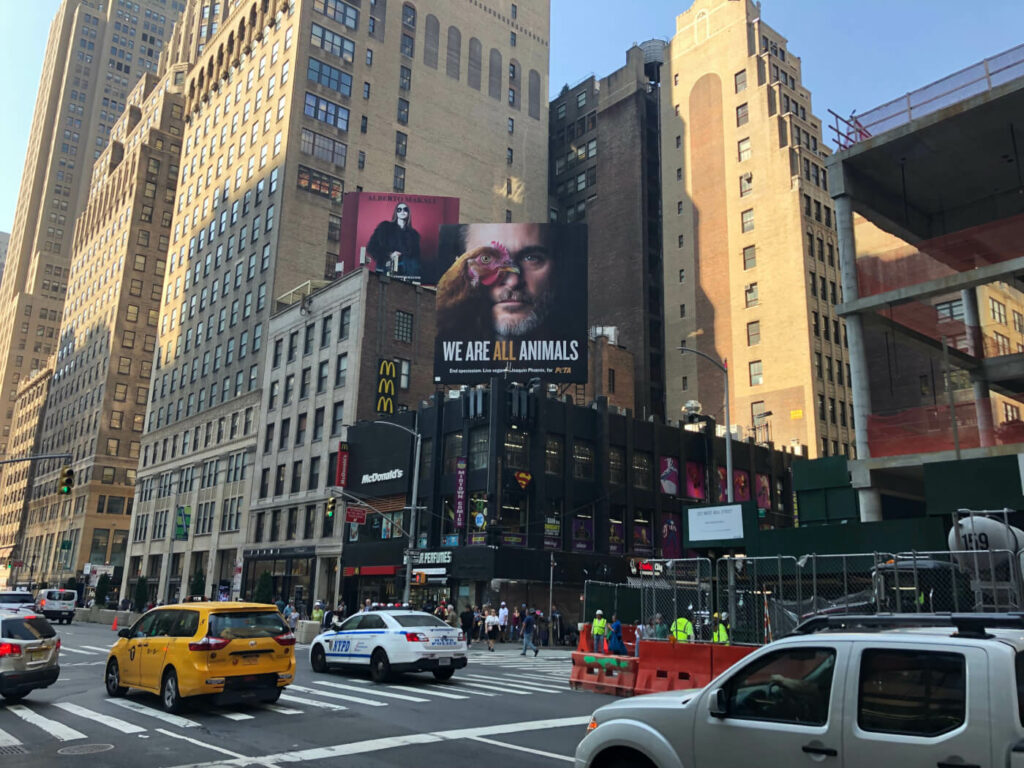 “When we look at the world through another animal’s eyes, we see that inside we’re all the same—and that we all deserve to live free from suffering.”

Since he first appeared in a charming pro-vegan ad for us just before Thanksgiving, no request has ever been too much for Joaquin. “Can you spend hours hanging out in a field with a flock of sheep to promote wool-free suits?” “Yes.” “Will you watch and narrate our gruesome undercover footage of dogs being killed in the leather industry?” “Yes.” (He later called it “one of the worst things I’ve ever seen.”) “Would you be willing to deprive yourself of oxygen in a swimming pool to show how fish suffer when they’re caught?” “Yes.”

That kind of dedication and determination has persisted throughout his entire life. His advocacy started at age 3, when he went vegan after watching a fish caught and gutted on a ship’s deck, and it’s continued for the past four-plus decades of living an animal-friendly life, seizing every chance to help others experience that same awakening.

Days after the Joker premiere, photographers followed him to a Los Angeles slaughterhouse, where he joined PETA’s friends in the Save Movement to give water to thirsty pigs and comfort them in their final moments—no doubt the only act of kindness they had ever known.

When he was being honored at the Toronto International Film Festival, Joaquin took members of the media to the St. George Subway Station to photograph him standing next to animal rights murals. And he’s been injecting animal issues into interviews, offering insights such as:

Now there is The Animal People, a documentary for which Joaquin was the executive producer that follows six activists who took on Huntingdon Life Sciences, a laboratory that PETA exposed for cruelty years ago.

Animal rights films are not new to his repertoire. Back when everyone was talking about Walk the Line and he was earning his second Oscar nomination, a BAFTA nod, a Golden Globe Award, and a Grammy, he was busy promoting Earthlings, the documentary he narrated that made almost everyone who saw it go vegan.

Earlier this year, Phoenix and his fiancée, Rooney Mara, carried the bodies of animals killed by the meat industry in their hands as they led advocates in the National Animal Rights Day March. And so much more.

For using his fame to put the spotlight on animals in need; for helping create films, billboards, and videos that wake people up; for loudly protesting against cruelty and quietly comforting animals during their last moments on Earth; for exemplifying compassion and respect for all individuals; and for serving as a living example of the end of speciesism, PETA is honored to name Joaquin Phoenix our 2019 Person of the Year. 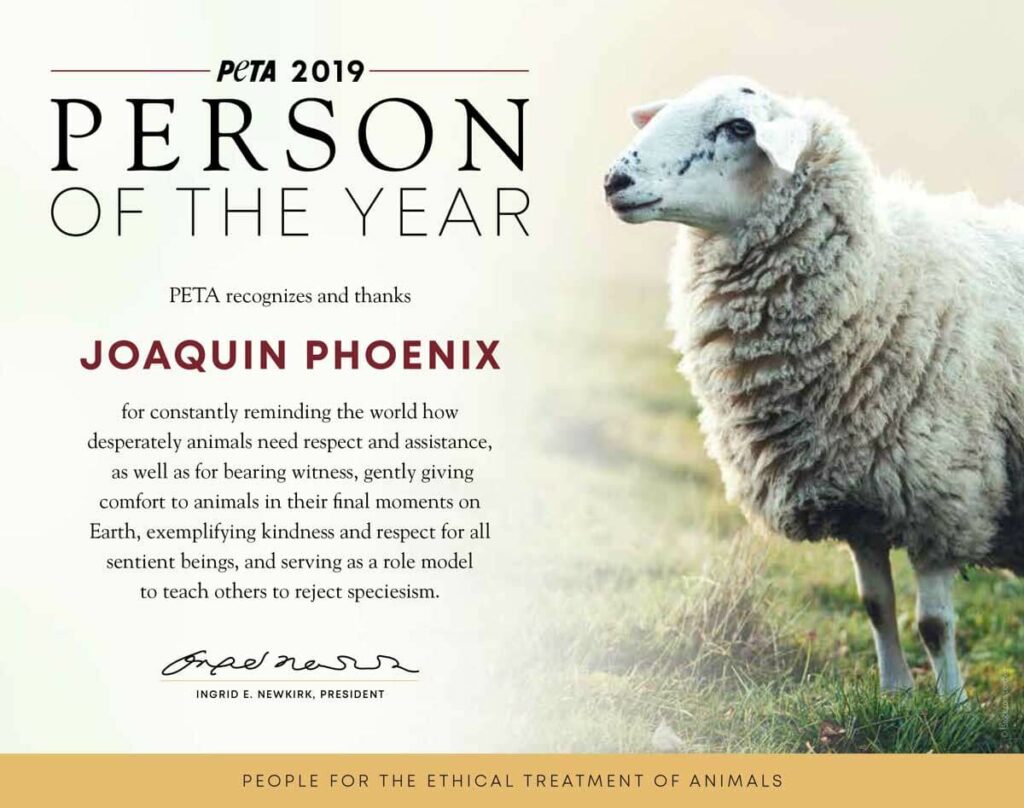