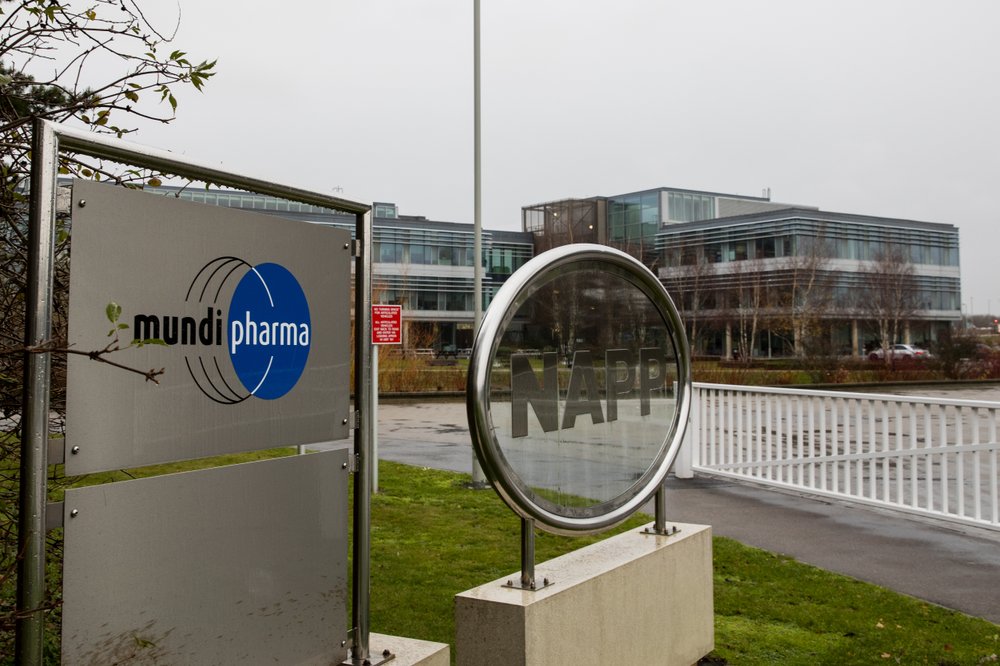 This Dec. 12, 2019, photo shows a sign at the Mundipharma International headquarters at Cambridge Science Park in England. Mundipharma is the international affiliate of Purdue Pharma, the maker of the blockbuster painkiller OxyContin. Mundipharma is now marketing Nyxoid, a new brand of naloxone, an opioid overdose reversal medication. (AP Photo/Leila Coker)

15 Dec 2019 – The gleaming white booth towered over the medical conference in Italy in October, advertising a new brand of antidote for opioid overdoses. “Be prepared. Get naloxone. Save a life,” the slogan on its walls said.

Some conference attendees were stunned when they saw the company logo: Mundipharma, the international affiliate of Purdue Pharma — the maker of the blockbuster opioid, OxyContin, widely blamed for unleashing the American overdose epidemic.

Here they were cashing in on a cure.

As Purdue Pharma buckles under a mountain of litigation and public protest in the United States, its foreign affiliate, Mundipharma, has expanded abroad, using some of the same tactics to sell the addictive opioids that made its owners, the Sackler family, among the richest in the world. Mundipharma is also pushing another strategy globally: From Europe to Australia, it is working to dominate the market for opioid overdose treatment.

“The way that they’ve pushed their opioids initially and now coming up with the expensive kind of antidote — it’s something that just strikes me as deeply, deeply cynical,” said Ross Bell, executive director of the New Zealand Drug Foundation and a longtime advocate of greater naloxone availability. “You’ve got families devastated by this, and a company who sees dollar signs flashing.”

Demonstrators outside the company headquarters of Purdue Pharma, owned by the Sackler family, in Stamford, Conn.  (photo: Erik McGregor/LightRocket/Getty Images)

Mundipharma’s antidote, a naloxone nasal spray called Nyxoid, was recently approved in New Zealand, Europe and Australia. Mundipharma defended it as a tool to help those whose lives are at risk, and even experts who criticize the company say that antidotes to opioid overdoses are badly needed. Patrice Grand, a spokesman for Mundipharma Europe, said in a statement that heroin is the leading cause of overdose death in European countries and nasal naloxone is an important treatment option.

Injectable naloxone has long been available; it is generic and cheap. But Mundipharma’s Nyxoid is the first in many countries that comes pre-packaged as a nasal spray — an easier, less threatening way for those who witness an overdose to intervene. Nyxoid, which isn’t sold in the U.S., is more expensive than injectable naloxone, running more than $50 a dose in some European countries. A similar product manufactured by another pharmaceutical company has been available for years in the U.S. under the brand name Narcan.

Critics say Nyxoid’s price is excessive, particularly when inexpensive naloxone products already exist. Grand declined to say how much Nyxoid costs Mundipharma to manufacture or how profitable it has been.

The Sackler family’s pharmaceutical empire has long considered whether it might make money treating addiction, according to lawsuits filed against Purdue and the family. In the U.S., Purdue Pharma called its secret proposal Project Tango, the attorneys general of Massachusetts and New York have alleged, and discussed it in a September 2014 conference call that included family member Kathe Sackler.

“It is an attractive market,” the staff wrote, according to the Massachusetts complaint. “Large unmet need for vulnerable, underserved and stigmatized patient population suffering from substance abuse, dependence and addiction.”

In its response to the court, the family’s lawyers wrote that the plan was put forward by a third-party private equity fund as a potential joint venture and “at the very most, Project Tango was mentioned in passing on a few occasions and the proposal was subsequently abandoned.” A press release issued by the Sacklers said no member of the family or board had an active role in the presentations or supported the proposal, and called the lawsuits “sensationalized” and “misleading.” Purdue declined to comment.

New York’s lawsuit alleges that in 2015, Project Tango was presented to Purdue’s board as a joint venture to sell the addiction medication suboxone that could become the “market lead in the addiction medicine space.” The presentation highlighted the sales opportunity in opioid addiction: 40 to 60 percent who went through treatment would relapse and need it again.

Project Tango stalled. It was revised the next year with a new plan to sell naloxone, the lawsuits allege.

Publicly, Purdue was denying that its painkillers caused the addiction epidemic. But in internal communications, the company described naloxone as a “strategic fit” and a “complementary” product to the prescription opioids they were already selling, the Massachusetts attorney general said. Purdue calculated that the need for overdose reversal medication was increasing so rapidly, potential revenue could triple from 2016 to 2018.

The lawsuit alleges that Purdue identified its own painkiller patients as a target market for naloxone — and that it could use its sales force already visiting doctors to promote opioids to also promote overdose reversal medication. They saw potential profits in government efforts to expand access to naloxone to stem the tide of overdose deaths, a toll that has soared to 400,000 since the American epidemic began.

Project Tango fizzled in the U.S.; the family’s press release said Purdue’s board rejected it.

But half a world away, in Australia, Mundipharma embarked on an effort to promote naloxone that was sweeping and effective.

As part of an Australian coroner’s investigation last year into six fatal opioid overdoses in New South Wales state, Mundipharma submitted a 15-page document touting the benefits of naloxone. If people around the overdose victims had had access to naloxone, the company wrote, many of those deaths may have been avoided. At the same time, Mundipharma was registering Nyxoid in Australia, a fact it acknowledged within its submission.

In the document, the company suggested that officials change the country’s laws to allow for easier access to naloxone, get naloxone into needle exchange programs, detox centers and supervised injecting clinics, and establish a national, free take-home naloxone program.

“The Coroner should consider what is needed to realise the full public health benefits of this essential medicine,” Mundipharma wrote.

During the coroner’s inquest, Mundipharma sent a staffer to court to testify about the benefits of naloxone nasal spray. According to a transcript, Mundipharma’s Medical Affairs Director, Brian Muller, came to court with samples of naloxone products, including Nyxoid.

Health and addiction experts also praised the drug’s life-saving potential. In her written findings delivered in March, Coroner Harriet Grahame agreed that naloxone should be more widely distributed and Nyxoid given to the state’s paramedics, police agencies, doctors and hospital emergency departments.

Mundipharma also paid for a drug policy institute’s study on naloxone that the federal government ultimately used as a blueprint for a 10 million Australian dollar ($6.8 million) pilot program to distribute naloxone, including Nyxoid. And in October, Australian Health Minister Greg Hunt announced that Australia’s government would subsidize Nyxoid prescriptions, meaning it costs Australians as little as AU$6.50 ($4.50) per pack, versus around AU$50 without the subsidy.

Asked in an interview whether the government had any concerns about following the recommendations of a Mundipharma-funded report that stood to benefit the company financially, Hunt replied: “All of the advice is that this is a product that will save lives and protect lives and our approach is to be fearless of the source of the product.”

In a statement, Mundipharma Australia denied its Nyxoid push in the country had any connection to, or was influenced in any way, by Purdue’s Project Tango.

Grand, the spokesman for Mundipharma Europe, also rejected any link between the company’s Nyxoid strategy and Project Tango, saying that the European company and Purdue have separate managements, boards and strategies.

In some countries, including Norway, Nyxoid is the only nasal naloxone product approved, said Thomas Clausen, a professor at the University of Oslo in Norway who runs the nation’s naloxone program. Clausen is happy that Nyxoid is available, but not that a company profiting from mass marketing opioids is now trying to profit again off opioid addiction.

Clausen said he hopes other companies will enter the market, and that competition will drive down cost. In its basic, generic form, Clausen said, naloxone is so cheap that the United Nations launched a pilot program in central Asian countries providing injectable naloxone at a cost of around $1 per kit.

Some critics argue that Mundipharma should be providing a cheaper — or even free — naloxone product, although Nyxoid’s cost is not remarkable when compared to the exorbitant price of many prescription drugs in the U.S. The most common nasal antidote in the U.S. retails for more than $100, double what most Europeans pay for Nyxoid.

Still, in some countries, Nyxoid’s price could prove problematic.

Pernilla Isendahl runs a naloxone distribution program in a county in south Sweden that began in June 2018, when Nyxoid came onto the market. Each kit costs the government 450 Swedish Krona ($47.)

The project is expected to run for at least three years, and she hopes after that the county will continue to pay for the medication, despite budget constraints.

“I can’t really see how it would be financed by the people themselves, at the price it is now,” she said.

In the United Kingdom, Nyxoid is being distributed by a handful of charities, said Peter Furlong, coordinator of British charity Change Grow Live’s Nyxoid distribution pilot program in Manchester. Furlong is pleased more people now have access to the medicine, but it still costs more than injectable naloxone. Furlong said he asked Mundipharma if they could reduce the drug’s price for the charity’s pilot, which began in August, but Mundipharma told him it was too early to talk discounts.

Grand, the spokesman for Mundipharma Europe, said the company was working closely with charities and addiction organizations to identify the best ways to make the drug available to those who may benefit from it. Nyxoid’s price reflects the company’s investment, manufacturing cost and the value of the technology, while recognizing the “prevailing financial pressures that exist within care sectors,” he said.

Stephen Wood, a fellow at the Harvard Medical School Center for Bioethics who studied how pharmaceutical companies in the U.S. raised prices on naloxone products as the addiction epidemic intensified, says that Sackler-owned companies manufacturing naloxone have an ethical duty to make it widely available.

“If they were trying to find a solution, they would just distribute naloxone for free,” he said. “They could use all that money they made off opioids to help support a program where they are giving away this life-saving medication.”

The Global Opioids project can be seen here: https://www.apnews.com/GlobalOpioids

This story was produced with support from the Pulitzer Center on Crisis Reporting.