“By all that is sacred in our hopes for the human race, I conjure those who love happiness and truth, to give a fair trial to the vegetable system.” 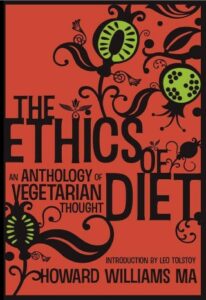 “We need another and a wiser and perhaps a more mystical concept of animals,” the great nature writer Henry Beston wrote in 1928 as he contemplated belonging and the web of life, adding: “In a world older and more complete than ours they move finished and complete, gifted with extensions of the senses we have lost or never attained, living by voices we shall never hear.”

Since the dawn of our species and its consciousness, we have reverenced other animals and incorporated them into our myths and our metaphors, into the basic fabric of our stories. But we have also eaten them — we may be the storytelling animal, but we are fundamentally animal.

One aspect of being primates endowed with higher consciousness and creators of culture is the will and willingness to transcend our primal impulses and regard that which is other with the dignity and respect we grant ourselves. And one existential expression of that willingness, not suited to all human animals but chosen by more and more in the past century, is the choice not to eat other animals.

Two decades before the word vegetarian was coined and two centuries before some of the world’s most prominent scientists signed the landmark Cambridge Declaration of Consciousness, acknowledging definitively that many non-human animals are conscious and capable of experiencing emotions, and a world order before science demonstrated unambiguously that animal agriculture is the third leading cause of climate change, vegetarianism found an improbable and impassioned champion in one of humanity’s most beloved and influential storytellers in verse: the great Romantic poet Percy Bysshe Shelley (August 4, 1792–July 8, 1822), who was among the first to present a reasoned philosophical argument — as opposed to a purely emotional appeal or political stance — around the ethics of meat consumption. 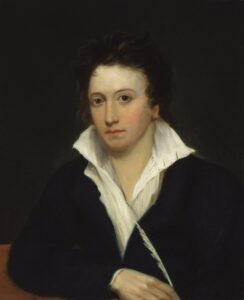 Together with his wife, Frankenstein author Mary Shelley — herself a creative visionary and intellect ahead of her time by centuries — Shelley advocated for ideas and practices utterly countercultural in his day: sexual liberation, atheism, individual freedom. Signing a hotel guestbook among the sheepishly pious inscriptions left by other guests, he declared himself a “Democrat, Philanthropist, and Atheist.”

Central to his credo was the insistence that eating other animals was antithetical to the moral and spiritual enlightenment of human consciousness. In his first literary masterpiece, the 1813 philosophical poem Queen Mab, Shelley envisioned a world in which “man has lost his terrible prerogative, and stands an equal amidst equals.” He expounded on the then-radical ideas presented in the poem in a set of notes later published in the 1893 book The Ethics of Diet: A Catena of Authorities Deprecatory of the Practice of Flesh-Eating by the English humanitarian Howard Williams, republished in the twenty-first century under the more palatable title The Ethics of Diet: An Anthology of Vegetarian Thought (public library) and presenting a case for vegetarianism drawn from the lives and writings of such famous proponents as Plato, Tolstoy, Thoreau, Schopenhauer, and Gandhi.

More than two millennia after Pythagoras pioneered the notion of a vegetarian diet as a pillar of his model of wisdom, Shelley begins by posing a fundamental question about the costs at which the benefits of so-called civilization come:

Man, and the other animals whom he has afflicted with his malady or depraved by his dominion, are alone diseased. The Bison, the wild Hog, the Wolf, are perfectly exempt from malady, and invariably die either from external violence or from mature old age. But the domestic Hog, the Sheep, the Cow, the Dog, are subject to an incredible variety of distempers, and, like the corruptors of their nature, have physicians who thrive upon their miseries. The super-eminence of man is, like Satan’s, the super-eminence of pain; and the majority of his species doomed to poverty, disease and crime, have reason to curse the untoward event that, by enabling him to communicate his sensations, raised him above the level of his fellow animals. But the steps that have been taken are irrevocable. The whole of human science is comprised in one question: How can the advantages of intellect and civilisation be reconciled with the liberty and pure pleasures of natural life? How can we take the benefits and reject the evils of the system which is now interwoven with the fibre of our being? I believe that abstinence from animal food and spiritous liquors would, in a great measure, capacitate us for the solution of this important question.

Nearly half a century before Darwin revolutionized our understanding of the biosphere with his theory of evolution, Shelley observes that we humans have developed in such a way as to lose our survival advantages as carnivorous predators — we can’t really kill large prey with our clawless appendages or devour carcasses with our small, blunt teeth — and have instead come to resemble herbivores far more closely. Pointing out that our cellulated colons are present in no carnivores and that the animal most akin to us is the orangutan, which is an herbivore, he writes:

Comparative anatomy teaches us that man resembles frugivorous animals in every thing, and carnivorous in nothing; he has neither claws wherewith to seize his prey, nor distinct and pointed teeth to tear the living fibre. A Mandarin of the first class, with nails two inches long, would probably find them alone inefficient to hold even a hare. After every subterfuge of gluttony, the bull must be degraded into the “ox”, and the ram into the wether, by an unnatural and inhuman operation, that the flaccid fibre may offer a fainter resistance to rebellious nature. It is only by softening and disguising, dead flesh by culinary preparation, that it is rendered susceptible of mastication or digestion; and that the sight of its bloody juices and raw horror, does not excite intolerable loathing and disgust… The structure of the human frame then is that of one fitted to a pure vegetable diet, in every essential particular. 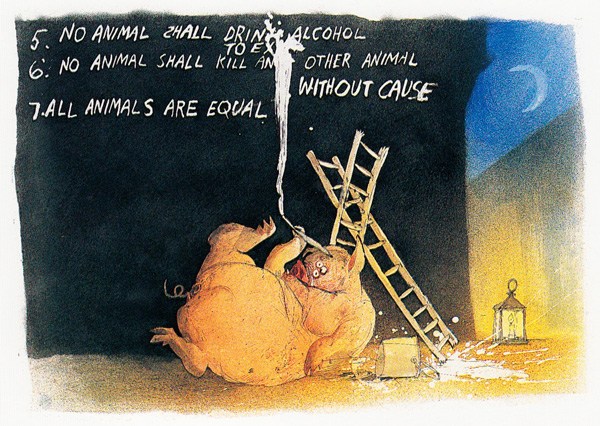 Art by Ralph Steadman from the special 50th anniversary edition of Animal Farm by George Orwell.

Shelley brings into sharp relief the central psychological dissonance of considering oneself a good human while eating animals:

Let the advocate of animal food, force himself to a decisive experiment on its fitness, and as Plutarch recommends, tear a living lamb with his teeth, and plunging his head into its vitals, slake his thirst with the steaming blood; when fresh from the deed of horror let him revert to the irresistible instincts of nature that would rise in judgment against it, and say, Nature formed me for such work as this. Then, and then only, would he be consistent.

A vegetarian diet, Shelley notes, is no silver bullet for the superficial symptoms of societal ills. Rather, it is a curative refinement of the very character of human beings, which would in turn effect a healing of the underlying maladies rotting the marrow of civilization. Building his ardent case upon a rhetorical foundation of logical reasoning, he exhorts:

Crime is madness. Madness is disease. Whenever the cause of disease shall be discovered, the root from which all vice and misery have so long overshadowed the globe, will lay bare to the axe. All the exertions of man, from that moment, may be considered as tending to the clear profit of his species. No sane mind in a sane body resolves upon a real crime… The system of a simple diet promises no Utopian advantages. It is no mere reform of legislation, whilst the furious passions and evil propensities of the human heart, in which it had its origin, are still unassuaged. It strikes at the root of all evil, and is an experiment which may be tried with success, not alone by nations, but by small societies, families, and even individuals. In no cases has a return to vegetable diet produced the slightest injury; in most it has been attended with changes undeniably beneficial. Should ever a physician be born with the genius of Locke, I am persuaded that he might trace all bodily and mental derangements to our unnatural habits, as clearly as that philosopher has traced all knowledge to sensation.

By all that is sacred in our hopes for the human race, I conjure those who love happiness and truth, to give a fair trial to the vegetable system. Reasoning is surely superfluous on a subject, whose merits an experience of six months would set for ever at rest. But it is only among the enlightened and benevolent, that so great a sacrifice of appetite and prejudice can be expected, even though its ultimate excellence should not admit of dispute. It is found easier, by the short-sighted victims of disease, to palliate their torments by medicine, than to prevent them by regimen. 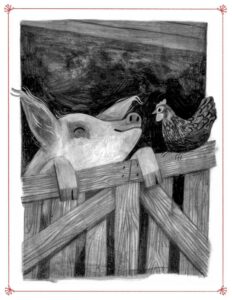 Illustration by Rebecca Green from How to Be a Good Creature by Sy Montgomery.

Shelley concludes with a crowning argument of even greater relevance today. Writing during the final chapters of the First Industrial Revolution, he notes that meat-eating is part of the power structure — only the wealthy of his era could afford feasts of flesh. But while the Second Industrial Revolution and the rise of capitalism have seemingly equalized and even inverted this symptom of the system, the foundational malady remains just as true, perhaps even more grimly so: In most industrialized countries today, commercial agriculture subsidies have made cheap meat more accessible to the poor than healthy produce — animal flesh is now baked into the most elemental political and governmental structure of our society. Shelley’s impassioned plea to citizens as agents of change sounds suddenly not out of time and place but all the more urgently relevant to our world:

The advantage of a reform in diet, is obviously greater than that of any other. It strikes at the root of the evil. To remedy the abuses of legislation, before we annihilate the propensities by which they are produced, is to suppose, that by taking away the effect, the cause will cease to operate.

I address myself not only to the young enthusiast: the ardent devotee of truth and virtue; the pure and passionate moralist, yet unvitiated by the contagion of the world. He will embrace a pure system, from its abstract truth, its beauty, its simplicity, and its promise of wide-extended benefit; unless custom has turned poison into food, he will hate the brutal pleasures of the chance by instinct; it will be a contemplation full of horror and disappointment to his mind, that beings capable of the gentlest and most admirable sympathies, should take delight in the death-pangs and last convulsions of dying animals… How much longer will man continue to pimp for the gluttony of death, his most insidious, implacable, and eternal foe?

Complement with Christopher Hitchens on George Orwell’s subversive message of animal rights and a little boy’s touching case against eating octopus — a case any adult can’t help but make for themselves after reading Sy Montgomery’s masterpiece The Soul of an Octopus.