Slavoj Žižek: The Trouble Is Not with the Jews, but with My Accusers 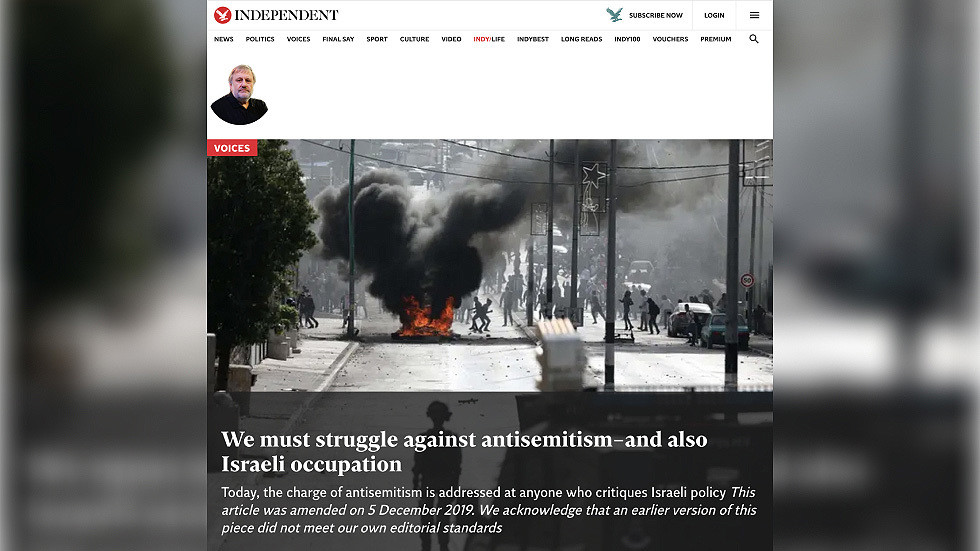 11 Dec 2019 – My latest article for the Independent provoked a wide campaign against me all around the world, so I wrote a reply. The paper rejected the publication of it even as one of the readers’ responses to my text on their website.

My text on the Independent website is followed by over 50 responses, mostly brutal attacks on me.

I am grateful to RT for their readiness to make my reply available to the public.

I began my comment for Independent with a reference to Sartre’s claim that being attacked from both sides is a sign that maybe you are on the right path, and reactions to it seem to confirm Sartre’s lesson. Ferocious attacks on me go up to proclaiming me “a philosophical mastermind of European anti-Semitism” – nothing new in this, years ago I was already attacked as proposing a new holocaust.

The other side, the true anti-Semites, is attacking me with the same blind rage. Here is what Andres Joyce writes in his

“Slavoj Žižek’s ‘Pervert’s Guide’ to Anti-Semitism”: “We must earnestly ask of Slavoj Žižek: Has Big Capital and the establishment ruling class not been, and does it not remain, significantly Jewish?”

In short, I deny the obvious fact that claims decried as “anti-Semitic” are factually true. The same journal claimed that my critique of Israeli politics is just a mask of my Zionist stance which prohibits any critique of Jews: Zizek

“went ‘full Monty’ during his recent visit to Tel Aviv at the invitation of some sincerely dissident Israelis. They expected words of encouragement, but instead he informed them that fighting anti-Semitism is more important than defending Palestinians.” This, so it seems, is how “a philosophical mastermind of European anti-Semitism” speaks.

Do I then posit myself in the middle, opposing both of these extremes? No, both extremes are for me false, they belong to the same side. Which, then, is MY side?

Let me begin by addressing the truly problematic part of my comment: I was wrong, I committed an unpardonable mistake in using the phrase “the trouble with Jews” (the text has since been edited and now reads “the trouble with the settlement project”) which effectively can be understood as implying that some “trouble” pertains to the very identity of being a Jew. This understanding clearly runs against the basic premise of my text which is that the proponents of full annexation of the West Bank are betraying the emancipatory core of the Jewish tradition itself. Yes, in some sense, there is a “trouble with Jews”: they are the troubling element for every politics of organic national identity, and that’s what makes anti-Semitism a universal and reliable sign that something is wrong with such politics.

So to whom do I owe an unreserved apology? Not to those who are attacking me – they have their own “trouble with Palestinians” – but to those (like Gideon Levy) who remain faithful to the true Jewish legacy. Rabbi Mirvis wrote in his infamous letter:

“a new poison – sanctioned from the top – has taken root in the Labour Party.”

My answer to this is that a new poison – sanctioned from the top – has taken root in Israeli politics. In Haaretz on December 8, Levy begins his comment

“From Now On, Every Palestinian Is an anti-Semite”

“The plague is spreading. Under cover of the (just) war against anti-Semitism, Europe and the United States silence every voice daring to criticize Israel. Under cover of this war, they are undermining their freedom of speech. Incredibly, this new phenomenon is not triggering any protest, as one would expect. Laws labeling anti-Zionism as anti-Semitism and the anti-occupation movement as anti-Semitic, are passed with overwhelming majorities. Now they are playing into the hands of Israel and the Jewish establishment, but they are liable to ignite anti-Semitism when questions arise about the extent of their meddling.”

THIS is the plague that threatens the soul of the Jewish nation. Why, then, did I commit my unpardonable mistake? The problematic words appear after my reference to Finkielkraut’s claim:

“The Jews, they have today chosen the path of rooting.” I go on: “No wonder many conservative anti-Semites ferociously support the expansion of the State of Israel. However, the trouble with Jews today is that they are now trying to get roots in a place which was for thousands of years inhabited by other people.”

“The Jews” I refer to here are clearly those who have “chosen the path of rooting” which implies curtailing the rights of those who already live in the land of their “roots.”

I don’t want to dwell on the details of the attacks on me which are a mixture of rather stupid misunderstanding and intentional malevolence. Let me briefly answer just a couple of them. (I am grateful to two of my good friends – a Palestinian, Jamil Khader, and a Jew, Udi Aloni, for providing me some data I refer to here.)

The attackers claim that no conservative anti-Semites are supporting the expansion of the State of Israel. Really? Let me mention just one extreme example: Anders Behring Breivik, the Norwegian Rightist “Marxist hunter” who in 2011 went on a killing spree with more than 70 dead. In his Manifesto, he declares himself anti-Semitic AND pro-Israel. The State of Israel is the first defence line against the Muslim expansion – he even wants to see the Jerusalem Temple rebuilt. But Jews in the West are OK only as long as there aren’t too many of them:

And is an example of how supporting Israel unconditionally becomes a license to peddle anti-Semitic tropes not Trump himself? The title of a recent report in Newsweek tells it all:

Next reproach: I ignore history which gives Jews the right to the West Bank. Really? If history proves anything, it is that we are all strangers in a strange land, beginning with the Jews themselves. They were thrown out of their land by the Romans, not Arabs, and how did they obtain this land? According to the Old Testament, they were not its first inhabitants: after their liberation from slavery in Egypt, when they arrived on the edge of the Promised Land, God commanded them to destroy totally the people already settled there (the Canaanites), not leaving alive “anything that breathes” (Deuteronomy 20:16). The book of Joshua records the carrying out of this command:

“they devoted the city to the LORD and destroyed with the sword every living thing in it — men and women, young and old, cattle, sheep and donkeys”(6:21).

Does this mean that Jews are somehow guilty of an original act of ethnic cleansing? Absolutely not: in ancient (and not so ancient) times, more or less ALL religious and ethnic groups functioned like that, the Buddhist ones included. But what we should unambiguously reject is the reference to ancient sacred texts as a direct legitimization of contemporary land-grabbing politics – when others (Muslims, Hindus, etc) are doing this, it is called religious fundamentalism.

The third reproach: the two-state solution is still an accepted frame of solving the West Bank problem. Really? Is this solution not de facto gradually abandoned? What is replacing it is more and more openly signaled by our media – just look at Caroline B. Glick’s NYT column, ‘There Should Be No Palestinian State’ where she claims that those who propose to recognize Palestine as a state

“are advancing Israel’s ruin. /…/ the phony two-state solution /…/ is merely doublespeak for seeking Israel’s destruction and its replacement with a terror state”.

Far from standing for an extremist minority view, this stance just renders explicit the strategic orientation of the State of Israel in the last decades: the disposition of new settlements (with a large number of them in the east, close to Jordanian border) makes it clear that a West Bank Palestinian state is out of the question.

In December 2016, Benjamin Netanyahu warned New Zealand that the UN resolution it co-sponsored was a “declaration of war” against Israel – but this resolution (which called for Israel to stop building settlements on occupied Palestinian land, declaring the settlements “illegal”) merely re-stated the accepted international position. So is the EU also declaring war on Israel?

On December 6, the US congress passed a resolution which declares that

“only the outcome of a two-state solution… can both ensure the state of Israel’s survival as a Jewish and democratic state and fulfill the legitimate aspirations of the Palestinian people for a state of their own.”

Are they also declaring war on Israel? But who cares – the life of occupation goes on, and its direction is clearly signaled by the maps in the Israeli school system which are not showing the West Bank territories as a separate entity, not even as a disputed territory, but as part of Israel.

Am I really obsessed by criticizing just Israel, ignoring other cases of criminal behaviour? A quick look at my work shows that I ferociously criticized Arab anti-Semitism, Turkish attack on Kurds, Iranian politics, China, Russia… I don’t call for the destruction of Israel, I don’t support any form of terror, in my comment I just insist that the West Bank is not simply and exclusively Jewish, that others also have a (perhaps even greater) right to it, and that the critique of Israeli politics of annexation is regularly read as an expression of anti-Semitism and abused for anti-Leftist purposes.

Do the attacks on me not confirm these fears of mine? The anti-Leftist campaign goes on and on – an Israeli-based group uses Facebook to spread disinformation to more than a million followers around the world, singling out Muslim US congresswomen, Jeremy Corbyn was just rated Top Anti-Semite of 2019 by Simon Wiesenthal Center (ahead of actual terrorists), and even Bernie Sanders is now added to the list of anti-Semites.

Against this ominous orientation, I remain faithful to the title of my comment: I am against anti-Semitism and FOR THIS REASON I express solidarity with Palestinians.