International Court of Justice in The Hague – Credit: United Nations

12 Dec 2019 – Appearing before 17 judges of the International Court of Justice (ICJ) in The Hague, Aung San Suu Kyi, the de facto civilian leader of Myanmar, became a public apologist for the military government of Myanmar which has long been accused of genocide and forcing over 730,000 Rohingya Muslims to flee to neighboring Bangladesh since a 2017 crackdown.

She was now ingloriously reduced to the point where she was defending the same military junta she battled for decades, which helped her win the Nobel Peace Prize back in 1991, while she was campaigning for democracy at the same time.

And her appearance before the ICJ was also meant to boost her popularity at home while plotting a meticulously laid path for re-election in 2020—this time misusing the halls of justice in The Hague?

It is a shocking fall from grace and dignity in the pursuit of domestic political power, he added. He also pointed out that this case is “truly historic”.

“Myanmar’s responsibility for genocide is being discussed in front of the International Court of Justice and the eyes of the world. The Gambia should be congratulated for having the intestinal fortitude to take this case forward when so many states and superpowers did not,” he added.

He said any other signatory to the Genocide Convention could have filed this case but only The Gambia had the courage to do so. This case is about establishing the historical truth of Myanmar’s state responsibility for genocide against the Rohingya.

Dr Adams said the ICJ could issue provisional measures that actually have an impact on the ground inside Myanmar and could help ease the persecution of the Rohingya.

And symbolically this ICJ case is devastating for Myanmar’s military. The whole world is discussing their atrocities. Their sense of impunity is looking a little less flimsy than they hoped, he declared.

Responding to the statement made by Aung San Suu Kyi at the ICJ, Nicholas Bequelin, Amnesty International’s Regional Director, said: “Aung San Suu Kyi tried to downplay the severity of the crimes committed against the Rohingya population. In fact, she wouldn’t even refer to them by name or acknowledge the scale of the abuses. Such denials are deliberate, deceitful and dangerous.”

The exodus of more than three quarters of a million people from their homes and country was nothing but the result of an orchestrated campaign of murder, rape and terror. To suggest that the military ‘did not distinguish clearly enough between fighters and civilians’ defies belief, Bequelin noted.

“Likewise, the suggestion that Myanmar authorities can currently and independently investigate and prosecute those suspected of crimes under international law is nothing but a fantasy, in particular in the case of senior military perpetrators who have enjoyed decades of total impunity,” he declared.

Dr Tawanda Hondora, Executive Director of World Federalist Movement – Institute for Global Policy (WFM-IGP), the organisation that houses and coordinates the work of the Coalition for the International Criminal Court (CICC), told IPS Aung San Suu Kyi’s concession that “…under the circumstances, genocidal intent cannot be the only hypothesis” is reason enough for the ICJ to impose an injunction against Myanmar for the well documented atrocities that have been committed in the country.

He said Aung San Suu Kyi must do the right thing and concede to the imposition by the ICJ of interim measures against Myanmar prohibiting its security forces from persecuting the Rohingya.”

“The Gambia must be applauded for lodging a complaint calling for the protection of the Rohingya in Myanmar.”

“The Rohingya minority in Myanmar have suffered terribly at the hands of the military regime but unlike Aung San Suu Kyi’s they are not in a position of power and have needed the goodwill of The Gambia.”

Referring to the paralysis in the UN Security Council , Dr Hondora said the leaders of the US, Russia, China, the UK and France – countries that constitute the UNSC P5 – should be ashamed that it has fallen on the Gambia a small country struggling with the aftereffects of the rule by a tyrant, Yahya Jammeh, to seek justice for the Rohingya”

The World Federalist Movement – Institute for Global Policy has called on the UN General Assembly to stand as one against states and others that commit offences that shock the conscience of humankind.

“The UN General Assembly must push for real and effective reforms of the UN system so that we can realise our collective ambition for the world to Never Again suffer such unimaginable atrocities,” he said.

Meanwhile, in a statement released here, the Global Centre for the Responsibility to Protect said a decision on the request for provisional measures can be expected within weeks.

According to Article 94 of the UN Charter, judgments of the ICJ are binding and the UN Security Council can take collective action to ensure that they are upheld.

Members of the Security Council should name the crime committed against the Rohingya and actively ensure that any provisional measures imposed by the Court are expeditiously implemented.

During her remarks the Nobel Peace Prize winner acknowledged the disproportionate use of force in the context of an “internal armed conflict,” but denied genocidal intent, the Global Centre said.

Tellingly, Aung San Suu Kyi did not use the word “Rohingya” once during her statement. Human rights specialists have argued that Myanmar’s official denial of Rohingya identity is inextricably linked to their policy of persecution, the denial of universal human rights and ultimately to the genocidal actions of the military in Rakhine State during August-December 2017.

On 9 December Canada and the Netherlands issued a joint statement welcoming the ICJ case and expressing their “intention to jointly explore all options to support and assist The Gambia in these efforts.”

All other parties to the Genocide Convention should also meaningfully support the case through public statements and legal interventions at the ICJ.

The international community failed to prevent a genocide in Myanmar, but it can still act to hold the perpetrators accountable, the statement added. 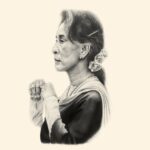