13 Dec 2019 – What are the real interests of the U.S. and corporations in the region? Freedom, democracy, human rights? No. Their goal is to preserve imperialist domination of our natural resources. 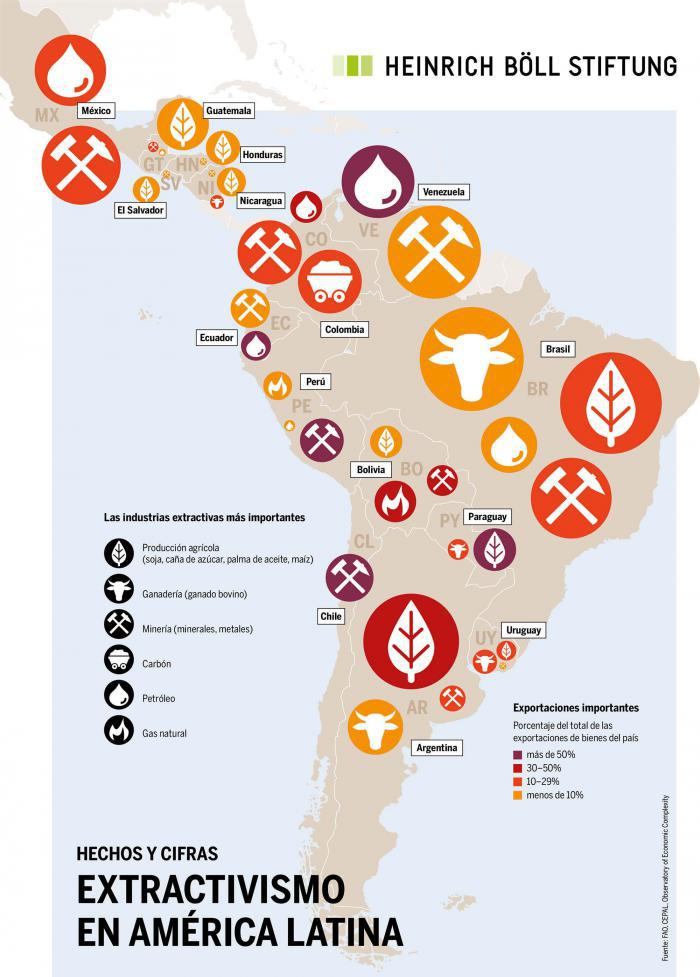 The history of Latin America has been one of plunder and the theft of our natural wealth. Photo: Heinrich Bóll Foundation

What are the real interests of the U.S. and corporations in the region? Freedom, democracy, human rights? No. Their goal is to preserve imperialist domination of our natural resources

Is Our America’s Wealth also Our Curse?

Since European empires first found important resources in the Americas, plundered and colonized our lands, the history of the region’s countries has been the theft of their natural wealth, a story similar to that of other geographical areas on the planet. In our case, Spain, France, Portugal and England came first, in the colonial period; later, the United States and giant transnational corporations. Once our formal independence was won, imperialist economic domination continued, and continues, in most nations in the hemisphere.

“Just like the first Spanish conquistadors, who gave Indians mirrors and trinkets for gold and silver, the United States trades with Latin America. To conserve that torrent of wealth, to seize more and more of America’s resources and exploit its suffering peoples: that is what is hidden behind Washington’s military pacts, military missions and diplomatic lobbies,” warned the historical leader of the Cuban Revolution, Fidel Castro Ruz, in the Second Declaration of Havana, February 4, 1962.

Progressive governments challenged monopoly interests when they nationalized, and recovered for the people, a large portion of their natural resources. These economic emporiums, which see the world as a cake to be divvied up, cannot accept losing the “juicy slice” that is Latin America and the Caribbean.

Suffice it to say that several countries in the region hold a significant portion of the world’s mineral deposits: 68% of the world’s lithium (Chile, Argentina and Bolivia), 49% of silver (Peru, Chile, Bolivia and Mexico), 44% of copper (Chile, Peru and, to a lesser extent, Mexico), 33% of tin (Peru, Brazil and Bolivia), 26% of bauxite (Brazil, Guyana, Suriname, Venezuela and Jamaica), 23% of nickel (Brazil, Colombia, Venezuela, Cuba and Dominican Republic), and 22% of iron (Brazil, Venezuela and Mexico), according to the Natural Resources report: Situation and trends for a regional development agenda in Latin America and the Caribbean, compiled by the Economic Commission for Latin America and the Caribbean (ECLAC) and the Community of Latin American and Caribbean States (CELAC).

Hence the strategic importance to U.S. interests of this part of the world, also the region closest to its national borders. Any direct or indirect intervention, under any pretext, would be less costly as compared to others carried out in Africa or Asia, although these are not renounced either. A look back at regional history shows the astonishing clarity of the phrase expressed by Simón Bolívar in 1829: the United States “appears destined by providence to plague America with miseries in the name of freedom.”

Washington’s Interest in Venezuela and Brazil

The term petro-aggression refers to the tendency of oil-rich states to be targeted by foreign aggressors, using pretexts of all kinds. The recent wars in the Middle East (Afghanistan, Iraq, Libya and Syria) promoted by the United States and its allies have this character.

According to data from the Venezuelan corporation Petróleos de Venezuela S.A. (PDVSA), the Hugo Chávez Frías Orinoco Oil Belt is the largest oilfield in the world. On December 31, 2010, the Organization of Petroleum Exporting Countries (OPEC) made official the certification of these reserves conducted by the country’s Ministry of Petroleum and Mining. In this way, OPEC “revealed the true situation of the oilfields that exist in the Hugo Chávez Frías Oil Orinoco Belt, with the certification of 270,976 million barrels (MMbls) of heavy and extra-heavy crude oil… With this certification, in addition to the certified reserves of 28,977 MMbls of light and medium crudes, the Bolivarian Republic of Venezuela totals 299,953 MMbls, attesting to the fact that the country holds the largest reserve of crude on the planet,” states PDVSA in its Oil Sovereignty Notebooks Collection.

According to the publication, Venezuela has 25% of OPEC’s reserves and 20% of those known on a world scale – oil that could provide for the country’s development over the next 300 years, at a recovery rate of 20%.

Likewise, in 2007, Petróleo Brasileiro S. A. (Petrobras) announced the discovery of substantial oil and natural gas resources in reservoirs located beneath an impermeable layer of salt on the country’s coastline, deposited 150 million years ago. The discoveries in Brazil’s pre-salt reserves are among the most important in the world, during the last decade. These reservoirs contain a large volume of excellent quality light oil, with significant commercial value, according to information from Petrobras.

The Brazilian Ministry of Mines and Energy highlights that the pre-salt field is currently one of the most important sources of oil and gas on the planet, and that around 70% of the nation’s reserves are located in these areas.

The Lithium Triangle in South America

Who doubts that the recent coup in Bolivia, promoted by the United States, was motivated by economic and political interests? The nationalization of hydrocarbons and strategic companies led by President Evo Morales meant economic freedom for Bolivia, but also a blow to the energy monopolies. For imperialism it was intolerable that the Bolivian people recover earnings from oil and gas, or that U.S. companies lose out on the business of mining a coveted mineral like lithium, in the nation with 30% of the world’s deposits.

This metal is referred to as “white gold” or “the mineral of the future” for many reasons. Its chemical properties make it the lightest solid element known, with half the density of water, excelling as an efficient conductor of heat and electricity. These electrochemical properties make lithium ideal for electric batteries (Li-Ion batteries), essential to the manufacture of electronic devices (cell phones, tablets, etc.) and electric cars, among other uses.

Access to this mineral is now at the center of global disputes. “Coincidentally,” the world’s largest known reserves are located in the so-called Lithium Triangle, in the border region between Bolivia, Chile and Argentina. Some 68% of the global reserves are concentrated here, and Bolivia has 30%, with the largest deposit on the planet in the Uyuni salt flats; Chile has 21%, and Argentina 17% of the total, according to a study published in the Revista Latinoamericana Polis, quoted by RT.

Some analysts are already predicting future wars over lithium, as has occurred with oil. Another sign to alert those of us south of the Rio Bravo, all the way to Patagonia, as to the importance of defending the Proclamation of Latin America and the Caribbean as a Zone of Peace, against the voracity of the United States and local oligarchies. Only regional unity can prevent a new predatory war and the balkanization in Our America.