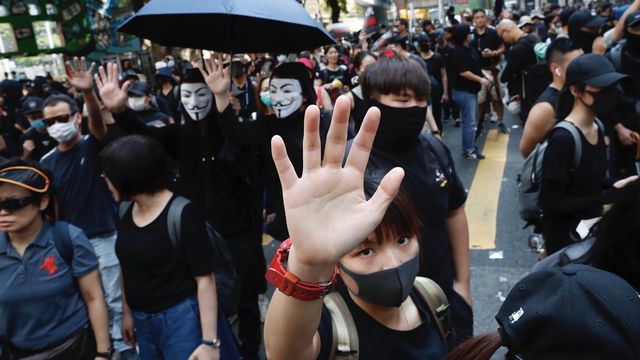 29 Nov 2019 – US President Donald Trump has signed into law a bill aimed at using the Hong Kong democracy protests against the Beijing-backed administration to apply greater pressure on China, as Washington deepens its economic and increasingly political warfare against the world’s second largest economy.

Entitled the “Hong Kong Human Rights and Democracy Act”—and passed by the US Congress with only one dissenting voice in the House of Representatives, making it veto-proof—the legislation has nothing to do with either.

It has been brought forward as part of the drive by the military and intelligence apparatus, with bipartisan support in the Congress, to intensify pressure against Beijing and create an ideological and political climate for stepped-up US actions.

Notably, the bill’s sponsor in the Senate was Florida Republican Marco Rubio, one of the most vociferous anti-China hawks in the US Congress, who has denounced China’s push to enhance its technological development as an existential threat to the US.

Under the legislation, the US secretary of state is now required to make an annual determination as to whether the “one country, two systems” formula that maintains Hong Kong’s legal system is intact. If it is found that it is not, then the US could revoke the economic and commercial concessions it extends to Hong Kong. It also provides for the imposition of sanctions and travel restrictions on individuals deemed to have committed human rights violations in Hong Kong.

The legislation will have no immediate practical effect, as it is largely a reversion to the situation that prevailed from 1992 to 2007, when a stipulation that Hong Kong’s special status was subject to annual review expired.

Its chief significance lies in creating the political climate, under the banner of “human rights” and “democracy,” for additional US economic measures against China, and possibly military action in the future.

The signing of the legislation was hailed by leaders on both sides of the aisle.

House Speaker Nancy Pelosi, a Democrat, said she was “pleased” that Trump had signed off on the legislation. She claimed that the US was sending a message that it stands in solidarity with the people of Hong Kong, invoking the bogus “human rights” rhetoric that forms the basis for US interventions around the world.

“If America does not speak out for human rights in China because of commercial interests, we lose all moral authority to speak out elsewhere,” she said. Pelosi said she looked forward to its “prompt enforcement”—a sentiment echoed by Rubio.

Jim Risch, the Republican chairman of the Senate Foreign Relations Committee, said it was an important step forward in holding the Chinese Communist Party accountable for its erosion of Hong Kong’s autonomy and its “repression of fundamental human rights.”

In signing the main legislation, as well as a bill banning the sale of crowd-control items to Hong Kong’s police, Trump said he had done so “out of respect for President Xi, China and the people of Hong Kong.” He added that the legislation is “being enacted in the hope that leaders and representatives of China and Hong Kong will be able to amicably settle their differences leading to long-term peace and prosperity for all.”

Earlier, when he was considering whether to veto the legislation, Trump said he stood with Hong Kong, but also with President Xi, whom he described as a “friend of mine.”

This brought a furious response from the Washington Post in an editorial board statement at the beginning of the week. Describing Trump as displaying a “noticeable weakness in the knees,” it took aim at his characterisation of Xi as a “friend.”

The Post wrote: “Mr Xi is not a ‘friend.’ Just take a minute to read the Trump administration’s own National Security Strategy document, which describes this as an era of great power rivalry.”

The editorial asserted that competition with China was over not only the South China Sea or trade, but was between “China’s illiberal, authoritarian system and the values of democracy and a rules-based order for which the United States must be a leading exponent and guardian.”

What is meant by “democracy and a rules-based order” is a global geo-economic and political system under the hegemony of the US. Under this system, any potential challenges to American dominance, such as economic and technological advances by China, are to be crushed by whatever means are considered necessary, with expressions of concern over “democracy and human rights” providing the ideological gloss.

In Hong Kong, the Trump decision has been welcomed by key elements in the protest movement. One of most prominent figures, Joshua Wong, was reported by Bloomberg as “lauding” the decision.

Calls in Hong Kong for the passage of the legislation began to be raised prominently in a demonstration on September 8, when a protest march headed by dozens of people carrying American flags converged on the US consulate. Significantly, the orientation to the US came after protest strikes involving hundreds of thousands of workers on September 2-3.

Hostile to any turn to the working class, either in Hong Kong or more broadly on the Chinese mainland, right-wing and pro-imperialist sections within the protest movement began turning more openly towards the US—providing grist to the propaganda mill of Beijing that the “black hand” of the US was at work in all the demonstrations.

There was an immediate reaction in Beijing to Trump’s signing of the legislation. US Ambassador to China Terry Branstad was summoned to the Foreign Ministry in Beijing. He was told that the US had to stop meddling in Hong Kong affairs and this would affect “cooperation in important areas,” a veiled reference to the ongoing talks on “phase one” of a trade agreement that Trump described on Tuesday as being in their “final throes.”

Chinese Foreign Ministry spokesman Geng Shuang dodged questions on what countermeasures might be imposed and whether the decision would affect trade talks when he spoke to reporters yesterday.

“Regarding specific countermeasures, I suggest you follow up on this issue,” he said. “You’d better stay tuned. What will come, will come.”

The concerns of the Chinese leadership go beyond trade, over which it had expressed optimism that a deal could be made.

They are chiefly concerned that the US moves on Hong Kong, growing agitation over reported human rights violations against the Muslim Uyghur minority in the western province of Xinjiang and in Tibet and increased support for Taiwan signal a concerted push by Washington to destabilise the Beijing regime by fracturing China.