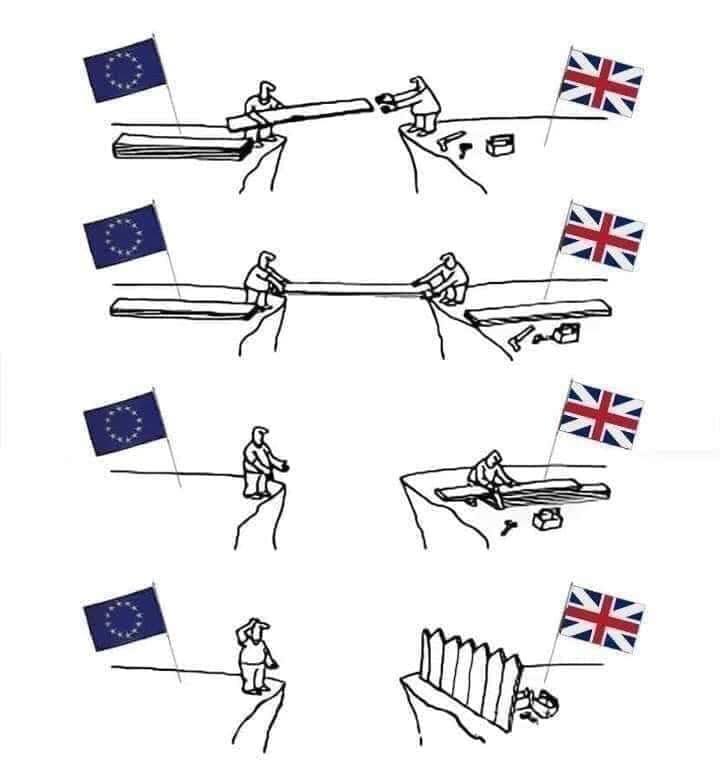 MPs voted yesterday 358 to 234—a majority of 124. They also voted to return to Parliament in January for three days of debate on the bill.

Labour leader Jeremy Corbyn, who has already declared he will stand down after the party’s election debacle, instructed his MPs to oppose the bill. But he has dwindling authority, so that 32 abstained and six—Sarah Champion, Rosie Cooper, Jon Cruddas, Emma Lewell-Buck, Grahame Morris, Toby Perkins—voted with the government.

The WAB will be discussed again by MPs on January 7 and is set to pass through all stages in Parliament and the House of Lords and receive Royal Assent before January 31.

The bill to enable the WAB’s passage was rushed through, with the government applying to the speaker Thursday for a session of Parliament to be held yesterday. The new speaker, Sir Lindsey Hoyle, replaced Remain supporting John Bercow, who played a central role in preventing Johnson’s predecessor Theresa May and Johnson himself from passing previous incarnations of the WAB during the last Parliament.

The massive majority vote was the first since Johnson defeated Labour by a landslide in last week’s general election. The result gave Johnson an 80-seat majority, with the Tories taking 365 seats and Labour just 203. The only candidates allowed to stand for the Tories in the election were those pledging that they would back Johnson’s WAB and leaving the EU at the end of January.

Following the resignation of Theresa May in June—after she failed to pass her own EU exit deal in Parliament on three occasion—Johnson agreed a new deal with the EU. But he lost the backing of the Democratic Unionist Party, which had propped up the Tories since 2017, by accepting that there will be a legal customs border between Northern Ireland (part of the UK) and the Irish Republic (an EU member state). This mean post-Brexit there will be a border in the Irish Sea, between mainland UK and island of Ireland which was anathema to the DUP. Goods will be checked at “points of entry” in Northern Ireland yet to be determined and a convoluted tariff system established.

MPs voted in October in favour of the principle of Johnson’s WAB deal by 329 votes to 299. However, he lost the subsequent vote on his planned timetable to get the necessary legislation through Parliament in just three days, with Remain-supporting MPs agreeing this tactic to prevent Johnson being able to pass the Bill outright. As Johnson inherited a minority government from May, and had lost the DUP’s support, he declared that he would “pause” the WAB and consult with the EU.

Johnson pressed for a snap general election and succeeded after Labour abandoned its opposition at the end of October.

Given that the UK is set leave the EU on January 31, the UK now enters an 11-month “transition period” during which it is scheduled to negotiate a new trade deal. In the meantime, Britain will formally cease to be an EU member but is able to trade with the EU based on the previous relationship and will continue to follow EU rules.

The new WAB confirms that Johnson will make it illegal to extend the Brexit transition period beyond December 2020, meaning that if a new trade deal is not finalised with the EU Britain will crash out of the bloc with a no-deal Brexit. Dominant sections of the ruling class, in the manufacturing sector and City of London, are strongly opposed to this outcome in which the UK would be forced to trade under World Trade Organisation rules.

In an indication of the right-wing agenda of the Johnson government, the Bill passed yesterday was stripped of various concessions May was forced to make to Labour and other parties in her failed attempt to win their support.

The sections promising to aligned workers’ employment rights with those of the EU were removed. The October WAB included a pledge that each time ministers passed a new law in future they would have to commit that “in their view” it did not “regress” from EU workers’ rights. Were they unable to do so, they would have had to make a statement acknowledging that the new law might regress from EU workers’ rights.

Even this token “commitment” cannot be tolerated by Johnson and his government of fanatical Thatcherites. In place of the previous wording, all legislation on workers protection will now be legislated in the UK Parliament.

Thursday’s Queen’s Speech outlining Johnson’s legislative agenda for the next years cynically states that the government will make “Britain the best place in the world to work.” A separate Employment Bill on workers’ rights is to be introduced in this session of parliament.

The new WAB also scraps a previous commitment to negotiate a new deal for child refugees after Brexit. The WAB’s explanatory notes state that an obligation to secure an agreement that an “accompanied child who has made a claim for international protection in a member state can come to the UK to join a relative” has been discarded. Instead the government will only make a statement to Parliament on the issue.

The WAB also allows British courts lower than the Supreme Court to reconsider European Court of Justice rulings that have been retained in British law after Brexit.

Ahead of the trade negotiations, the EU played down the chances of the Johnson government being able to secure a deal in 11 months. On Wednesday, European Commission President Ursula von der Leyen warned that the timetable was “extremely challenging,” with negotiators having “very little time” available.

Speaking to European Parliament members, she warned, “In case we cannot conclude an agreement by the end of 2020, we will face again a cliff-edge situation.” In a threat to Johnson she warned, “This would clearly harm our interest but it will impact more the UK than us, as the EU will continue benefiting from its single market, its customs union and the 700 international agreements we signed with our partners.”

The Financial Times noted that Johnson faced a “bumpy year ahead” on Brexit: “He [Johnson] seems to think that the EU will agree a zero-tariff, zero-quota free trade agreement next year, even if the British make no commitment to dynamically align with EU regulations in future. But it’s very hard to believe that member states will agree to this.”

With the Johnson government seeking to transform the UK into a deregulated, low-tax, low-wage haven for big business off the shores of mainland Europe, the EU fears that any economic and trade advantage it is able to secure in negotiations will facilitate trade war measures directed against an “over-regulated” Brussels.

Peter Foster commented in the Telegraph, the Tories pro-Brexit house organ: “The EU has made clear that the ‘size and proximity’ of the UK to Europe means that the UK will need to sign up to EU rules to guarantee the ‘level playing field’ if it wants to be the only country outside the EU’s customs union to get ‘zero/zero’ access to the single market.”