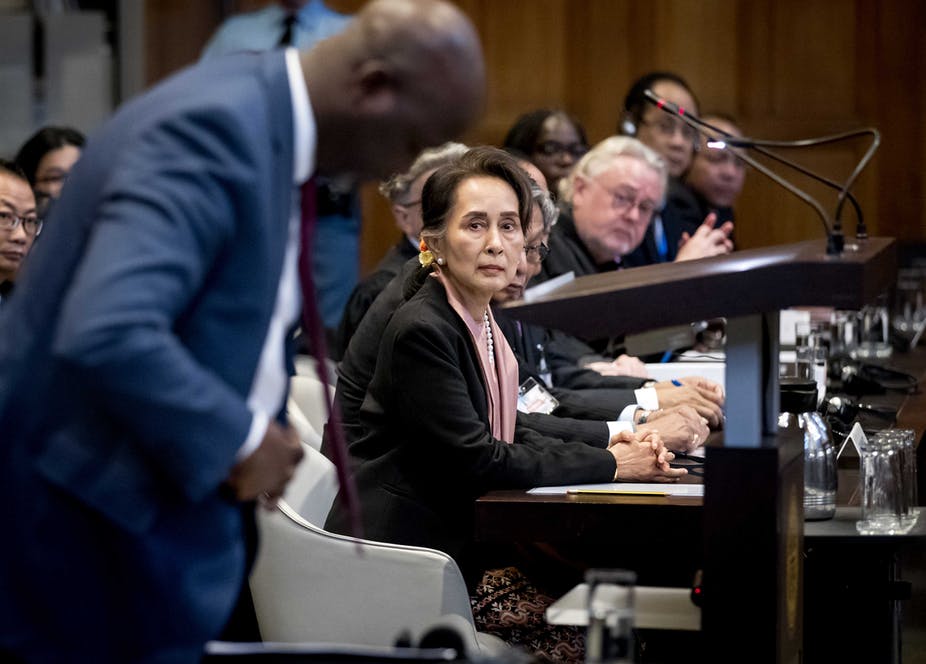 Aung San Suu Kyi and Myanmar’s legal team at the International Court of Justice in The Hague.  Koen Van Weel/EPA

10 Dec 2019 – In what is likely to be a remarkable moment for international justice, Aung San Suu Kyi, the political leader of Myanmar and a Nobel peace prize winner, will be in The Hague this week to lead her country’s defence against allegations of genocide.

On November 11, the Gambia launched proceedings against Myanmar before the International Court of Justice (ICJ) for alleged violations of the Convention on the Prevention and Punishment of the Crime of Genocide. I have looked into the question of atrocity crimes, including genocide, as part of my recent research on the principle of the responsibility to protect in international law.

The case focuses on the clearance operations carried out from around October 2016 by Myanmar’s military and security forces against the Rohingya Muslims, a distinct ethnic and religious group that resides primarily in Myanmar’s Rakhine state.

The Gambia claims that those operations amounted to a genocidal campaign of violence that included mass murder, forcible displacement, rape, and other forms of sexual violence. The UN says that 742,000 Rohingya have fled Myanmar for neighbouring Bangladesh since 2017 and many are still living in dire conditions in refugee camps.

During the public hearings that the ICJ will hold between December 10 and 12, the Gambia will essentially ask the court to order Myanmar to prevent ongoing atrocities against the Rohingya so as to protect them from further, irreparable harm – something known as “provisional measures”. 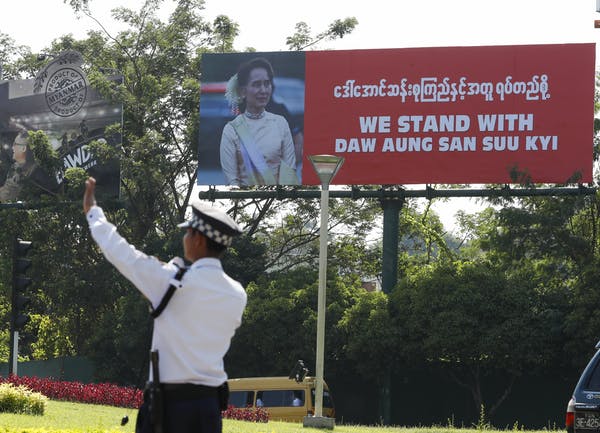 A poster in Yangon, Myanmar in support of Aung San Suu Kyi before her trip to The Hague. Lynn Bo Bo/EPA

This is the third time that the world’s court has been called to establish whether a state is responsible under international law for breaches of the genocide convention. In 2015, the ICJ ruled that neither Croatia nor Serbia had committed genocide during the hostilities that took place in Croatia between 1991 and 1995. In a 2007 case brought by Bosnia-Herzegovina, the court also cleared Serbia of direct responsibility for genocide and complicity in genocide in relation to the 1995 massacre of Srebrenica.

This means that the ICJ has never held a state responsible for committing genocide. In this respect, the 2007 and 2015 verdicts reveal some of the obstacles that the Gambia will face in persuading the court that Myanmar committed genocide against members of the Rohingya group.

The genocide convention lists a number of acts, including killing or causing serious bodily or mental harm, that may constitute genocide provided that they are committed with the “intent to destroy”, in whole or in part, a national, ethnic, racial or religious group.

It is precisely the existence of this special intent that distinguishes genocide from other heinous crimes. This is of special importance given the difficulty of proving genocidal intent in a courtroom. In the absence of direct conclusive evidence, the ICJ will infer genocidal intent from particular circumstances – such as a pattern of acts committed against members of the targeted group – only if the circumstances point unequivocally to the existence of that intent.

Adopting this strict approach in both the 2007 and 2015 judgements, the court determined – with the only exception of Srebrenica – that the atrocities committed during the conflicts in Croatia and Bosnia lacked the requisite intent to destroy the targeted groups, and so could not be qualified as genocide. In the case of Srebrenica, the court ruled that the acts “were committed with the specific intent to destroy in part the group of the Muslims of Bosnia and Herzegovina” and were therefore genocide.

Still, it found that Serbia itself was not directly responsible for the massacre, which was committed by Bosnian Serbs. Serbia was nevertheless found responsible for failing to prevent genocide given that it was in a position of influence over those who devised and implemented it.

The rationale for setting such a high standard of proof is, in the ICJ’s words, that: “Claims against a state involving charges of exceptional gravity must be proved by evidence that is fully conclusive.”

Unsurprisingly, this stringent approach has been the object of much criticism. One of the current judges sitting at the ICJ, Cançado Trindade, noted in 2015 that imposing such a high threshold for proof of genocide runs the risk of reducing the genocide convention to a dead letter.

To demonstrate the genocidal nature of the violence against the Rohingya, the Gambia – which is backed by the 57 members of the Organisation of Islamic Cooperation – will rely extensively on UN sources. In March 2017 the UN Human Rights Council created an Independent International Fact-finding Mission on Myanmar and tasked it with establishing the facts and circumstances of the human rights violations committed by Myanmar’s military and security forces against the Rohingya.

The implications of the mission’s investigative activities could be profound. In the 2007 genocide case, the ICJ relied heavily on the judgements of the International Criminal Tribunal for the former Yugoslavia (ICTY) to conclude that genocide was committed at Srebrenica. The authoritativeness of the UN’s factfinding mission to Myanmar cannot be equated to that of a tribunal such as the ICTY. Yet, the ICJ is likely to give serious consideration to the mission’s reports in light of the care taken in preparing them, their comprehensiveness, and the independence of those responsible for their preparation.

Crucially, the 2018 and 2019 reports infer genocidal intent behind the attacks against the Rohingya from a number of factors and circumstances linked to, among other others, the brutality and the scale of destruction of the military operations as well as the widespread use of rape and sexual assault during those operations.

The ICJ judges will need to be satisfied with the solidity of this inference of genocidal intent by the UN mission. However, the very fact that they will have to engage with and determine the weight of those findings as evidence will be of paramount importance.

After ruling on the question of provisional measures – and assuming that no jurisdictional obstacles will be identified – the court will fix time limits for the filing of the parties’ written pleadings in the case. After the written and then oral proceedings, the court will begin its deliberation and so it will be some years before a final decision on this important case is made.