Dostoyevsky, Just After His Death Sentence Was Repealed, on the Meaning of Life

“To be a human being among people and to remain one forever, no matter in what circumstances, not to grow despondent and not to lose heart — that’s what life is all about, that’s its task.” 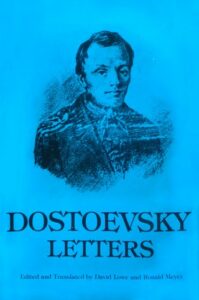 “I mean to work tremendously hard,” the young Fyodor Dostoyevsky (November 11, 1821–February 9, 1881) resolved in contemplating his literary future, beseeching his impoverished mother to buy him books. At the age of twenty-seven, he was arrested for belonging to a literary society that circulated books deemed dangerous by the tsarist regime. He was sentenced to death. On December 22, 1849, he was taken to a public square in Saint Petersburg, alongside a handful of other inmates, where they were to be executed as a warning to the masses. They were read their death sentence, put into their execution attire of white shirts, and allowed to kiss the cross. Ritualistic sabers were broken over their heads. Three at a time, they were stood against the stakes where the execution was to be carried out. Dostoyevsky, the sixth in line, grew acutely aware that he had only moments to live.

And then, at the last minute, a pompous announcement was made that the tsar was pardoning their lives — the whole spectacle had been orchestrated as a cruel publicity stunt to depict the despot as a benevolent ruler. The real sentence was then read: Dostoyevsky was to spend four years in a Siberian labor camp, followed by several years of compulsory military service in the tsar’s armed forces, in exile. He would be nearly forty by the time he picked up the pen again to resume his literary ambitions. But now, in the raw moments following his close escape from death, he was elated with relief, reborn into a new cherishment of life. He poured his exultation into a stunning letter to his brother Mikhail, penned hours after the staged execution and found in the first volume of the out-of-print collection of his complete correspondence, the 1988 treasure Dostoevsky Letters (public library).

A century before Holocaust survivor Viktor Frankl offered his hard-won assurance that “everything can be taken from a man but one thing: the last of the human freedoms — to choose one’s attitude in any given set of circumstances,” Dostoyevsky writes:

Brother! I’m not despondent and I haven’t lost heart. Life is everywhere, life is in us ourselves, not outside. There will be people by my side, and to be a human being among people and to remain one forever, no matter in what circumstances, not to grow despondent and not to lose heart — that’s what life is all about, that’s its task. I have come to recognize that. The idea has entered my flesh and blood… The head that created, lived the higher life of art, that recognized and grew accustomed to the higher demands of the spirit, that head has already been cut from my shoulders… But there remain in me a heart and the same flesh and blood that can also love, and suffer, and pity, and remember, and that’s life, too!

Still, even through this elation, the animating force of his being — his identity as a writer — grounds him into a depth of despair. “Can it be that I’ll never take pen in hand?” he asks in sullen anticipation of the next four years at the labor camp. “If I won’t be able to write, I’ll perish. Better fifteen years of imprisonment and a pen in hand!” But he quickly recovers his electric gratitude for the mere fact of being alive and, reassuring his brother not to grieve for him, continues:

I haven’t lost heart, remember that hope has not abandoned me… After all I was at death’s door today, I lived with that thought for three-quarters of an hour, I faced the last moment, and now I’m alive again!

In a beautiful testament to the elemental fact that when all the static of our self-righteousness dies down, what remains between good people is only love, he writes:

If anyone remembers me with malice, and if I quarreled with anyone, if I made a bad impression on anyone — tell them to forget about that if you manage to see them. There is no bile or spite in my soul, I would like to so love and embrace at least someone out of the past at this moment.

When I look back at the past and think how much time was spent in vain, how much of it was lost in delusions, in errors, in idleness, in the inability to live; how I failed to value it, how many times I sinned against my heart and spirit — then my heart contracts in pain. Life is a gift, life is happiness, each moment could have been an eternity of happiness. Si jeunesse savait! [If youth knew!]

Half a century before Oscar Wilde penned his extraordinary letter about suffering as a force of transformation and transcendence from prison, where he was interned for having loved whom he loved, Dostoyevsky adds:

Now, changing my life, I’m being regenerated into a new form. Brother! I swear to you that I won’t lose hope and will preserve my heart and spirit in purity. I’ll be reborn for the better. That’s my entire hope, my entire consolation.

Life in the casemate has already sufficiently killed off in me the needs of the flesh that were not completely pure; before that I took little care of myself. Now deprivations no longer bother me in the slightest, and therefore don’t be afraid that material hardship will kill me.

Having spent years in material privation myself — though never, mercifully, nearly to the extent Dostoyevsky endured — and being always grateful for how those times annealed me, how they made me less afraid of poverty and hardship, more willing to take risks others might not, to take less materially secure paths in life (one resulting in the birth of Brain Pickings), I can’t help but wonder how much this harrowing experience fomented Dostoyevsky’s extraordinary perseverance as an artist against the tides of convention and the constant specter of poverty. It certainly reverberates throughout Notes from the Underground, Crime and Punishment, and especially The Brothers Karamazov; it certainly informed his ideas about the meaning of life, set forth decades later in the guise of a dream, and inspired his insistence upon the existential duty of seeing the goodness in people “despite the abundance of all sorts of wretches.”

Complement with a young neurosurgeon on the meaning of life as he faces his death and Walt Whitman on what makes life worth living, then revisit Anna — the love of Dostoyevsky’s life, who saved him from poverty and debtor’s prison — on the secret to a happy marriage.

One Response to “Dostoyevsky, Just After His Death Sentence Was Repealed, on the Meaning of Life”