5 Jan 2020 – Iran has announced that it will no longer abide by any of the limits imposed by the unravelling 2015 nuclear deal, and Iraq’s parliament urged its leaders to expel troops from the US-led coalition, as the aftershocks of the assassination of Iranian general Qassem Suleimani reverberated through the Middle East.

In a statement broadcast on state TV late on Sunday, the Iranian government said the country would no longer observe limitations on uranium enrichment, stockpiles of enriched uranium or nuclear research and development. But the statement noted that the steps could be reversed if Washington lifted its sanctions on Tehran.

The announcement came hours after hundreds of thousands took to the streets in Iran to mourn Suleimani as his remains were carried through the cities of Ahvaz and Mashhad, ahead of a burial in his hometown on Tuesday.

Mourners thronged Mashhad, Iran’s second city, as Suleimani’s coffin was paraded on a truck through the streets to the floodlit Imam Reza shrine, chanting, “Iran’s wearing black, revenge, revenge” and holding up portraits. The scale of the procession forced the cancellation of a Sunday night ceremony in Tehran, according to Iran’s Revolutionary Guards, who urged citizens instead to attend a memorial at Tehran University on Monday.

The Iraqi parliament’s call to expel US troops was another clear sign of blowback from the assassination – and was quickly hailed by Suleimani’s supporters as a major step towards one of his main goals.

Though the Iraqi debate that called for the US exit is not binding, and would require a one-year notice period, the fact that the move was led by a prime minister regarded as a US ally showed just how divisive the killing has become, and how quickly US interests in the region could unravel as a result.

Adel Abdul Mahdi, who stepped down as leader last November and now serves in an acting capacity, said “urgent procedures” were needed to start a US exit, which he described as necessary to restore “our national sovereignty”.

Abdul Mahdi said he had been due to meet Suleimani on the morning he was killed by a US Reaper drone on a road leaving Baghdad airport.

“He was to come to me with a message from Iran responding to the message we delivered from Saudi to Iran,” he added. Suleimani and an Iraqi official, Mohammed al-Hashimi, otherwise known as Abu Jihad, had acted as conduits in a recent Saudi-initiated move to de-escalate tensions between the two regional heavyweights.

Shortly after Abdul Mahdi’s statement, the US announced that it was suspending operations against the Islamic State (Isis) in Iraq and a five-year-old training mission to equip local forces. A US statement claimed the suspension was a reaction to rocket attacks on US bases, carried out in recent weeks by Shia militia members.

Suleimani was the second most powerful person in Iran and the most influential Iranian outside the country, travelling the region like a Persian viceroy as he directed conflicts in Iraq, Syria and Lebanon, and as far away as Yemen. The extraordinary scenes of mourners thronging Iranian cities were a powerful testament to his popularity at home and the anger directed at the US for his killing a figure so central to Iran’s presence on the regional stage.

In Lebanon, one of Suleimani’s main arenas, the leader of Hezbollah, Hassan Nasrallah, claimed the so-called “axis of resistance”, in which the Lebanese militia is a key player, was aiming for the removal of the US military presence from the Middle East.

“The US army has killed these people,” Nasrallah said, referring to Abu Mahdi al-Muhandis, an ally of Suleimani also hit in the airstrike in Baghdad in the early hours of Friday. “We do not at all mean the American people and citizens across our region … It is up to anyone from the axis of resistance to deliver a fair punishment after Soleimani’s assassination.”

Nasrallah said he had met Suleimani a week before his death. “I warned him that there was talk about him in the US media and told him that that was a precursor to his assassination. He laughed and shrugged off the possibility,” he said. “This was not a separate assassination operation. This is the start of a new US war in the region.”

Hezbollah’s reaction had been seen as a harbinger of how coming days and weeks might play out in a region deeply unsettled by Suleimani’s death, and Nasrallah drawing a distinction between US citizens and the country’s military allayed fears in Beirut diplomatic circles of a broader risk to western interests.

In Tehran, a former chief of the Revolutionary Guards said the Israeli city of Haifa would be included in Tehran’s retaliation. “Iran’s revenge against America for the assassination of Suleimani will be severe … Haifa and Israeli military centres will be included in the retaliation,” Mohsen Rezaei said in a televised speech. 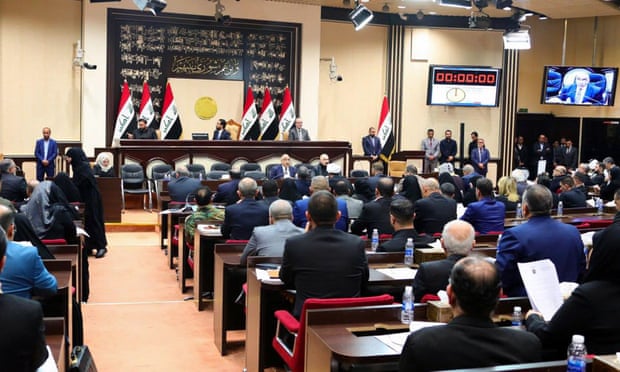 Iraqi parliamentarians voted 170-0 in favour of the motion calling for the expulsion of US troops.
Photograph: Iraqi Prime Minister’s Office/EPA

Withdrawing US forces from Iraq would be damaging to Washington’s interests in a region still recovering from the invasion of Iraq 17 years ago and the rampage of Isis, which forced millions of people from their homes and led to widespread destruction across the country. While Isis has been defeated on the battlefields of Iraq and Syria, it remains a residual insurgent threat and there are growing signs that the terror group is reorganising, despite being on its knees in its former heartland.

In Iraq’s parliament, the resolution urging a US exit was passed by 170 votes to nil. However, Kurds and Sunni members boycotted the vote, which meant it was carried by mostly Shia lawmakers. During the debate, members of the pro-Iranian Asa’ib Ahl al-Haq militia, which also has a political bloc, led chants of “no, no America, yes, yes Suleimani”.

Suleimani enjoyed wide popularity among the Shia population of Iraq, although he was scorned by nationalists, who viewed his enormous influence as subversive to the country’s interests. He was also a deeply contentious figure in the broader region; he was widely regarded as the architect of the Syrian regime’s pushback, which saw a civilian uprising crushed and drew accusations of a sectarian project to advance Iran’s interests.

In the southern Iraqi city of Nasiriyah, a clash erupted between mourners carrying a replica coffin and protesters who tried to stop their entry to a town square. “All those celebrating the martyrdom of Suleimani will pay a high price, said a mid-level commander of local security forces. “We have their faces recorded on cameras and we will go after them one by one. The fact that millions participated in the funeral of Suleimani and Muhandis is a sign of divine grace and proof that they are more popular than the anti-Iran demonstrators.”