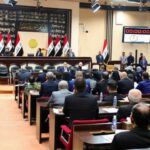 5 Jan 2020 – Iran has announced that it will no longer abide by any of the limits imposed by the unravelling 2015 nuclear deal, and Iraq’s parliament urged its leaders to expel troops from the US-led coalition, as the aftershocks of the assassination of Iranian general Qassem Suleimani reverberated through the Middle East.