Over 9,000 Palestinians Displaced in a Decade of West Bank Demolitions

24 Dec 2019 – Israel’s demolition regime in the West Bank and East Jerusalem has destroyed over 6,000 Palestinian structures, displacing thousands of Palestinians over the past decade — over half of whom are children and minors. 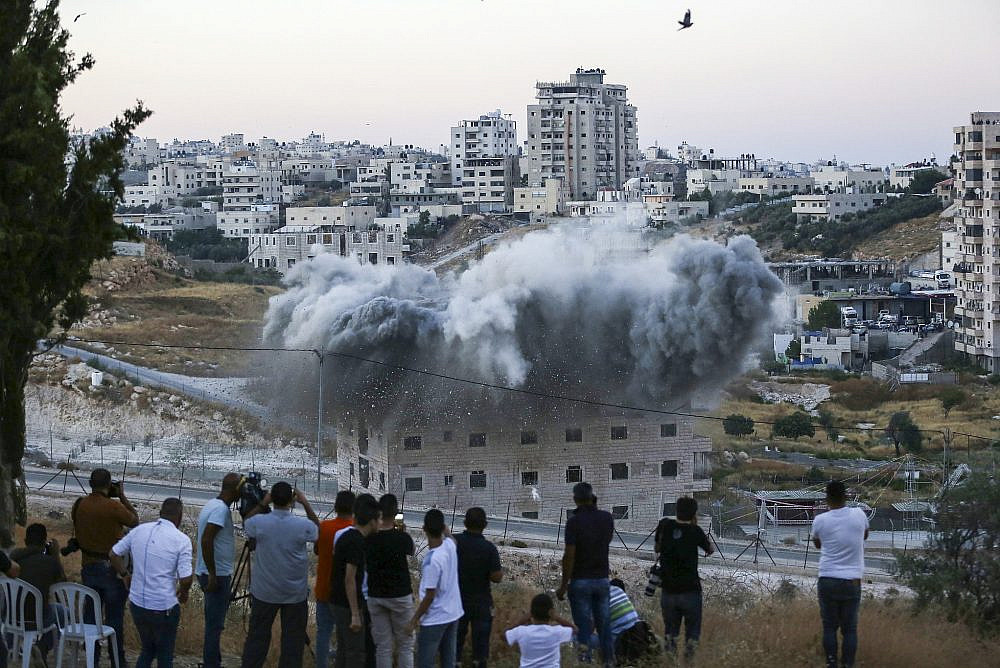 A Palestinian building is blown up by Israeli forces in the village of Sur Baher, East Jerusalem, July 22, 2019.
(Wisam Hashlamoun/Flash90)

Israeli authorities demolished over 6,000 Palestinian structures in the West Bank and East Jerusalem between 2010 and 2019, according to the United Nations. More than 9,000 Palestinians were displaced as a result.

The figures, collected by the UN Office for the Coordination of Humanitarian Affairs – Occupied Palestinian Territory, show the scale of Israel’s demolition regime over the Green Line. The vast majority of the destruction (79 percent) has taken place in Area C of the West Bank, over which the Israeli army has full control. Roughly two percent of demolitions took place in Areas A and B of the West Bank, which are putatively under full and partial Palestinian Authority control, respectively.

Around 19 percent of demolitions took place in East Jerusalem. Although Israel annexed the area in 1981 — technically making it Israeli territory — it is often subjected to similar policies as the West Bank because most of its inhabitants are not Israeli citizens (and many, in fact, are stateless).

In total, 6,116 structures were demolished between January 1, 2010, and December 24, 2019, displacing 9,249 people — over half of whom are children and minors. In addition, over 115,000 people’s livelihoods were affected by the demolitions. Around 28 percent (1,734) of the destroyed structures were inhabited residential buildings. As this piece was being written, Israeli authorities were in the process of carrying out a string of demolitions throughout the West Bank and East Jerusalem, including at least five on December 24, meaning that these figures may be out of date by the time of publishing.

In a minority of cases, demolitions were carried out by the owners of the structures, who had received a demolition order and wanted to avoid the fees incurred when the Israeli authorities carry out the destruction themselves. 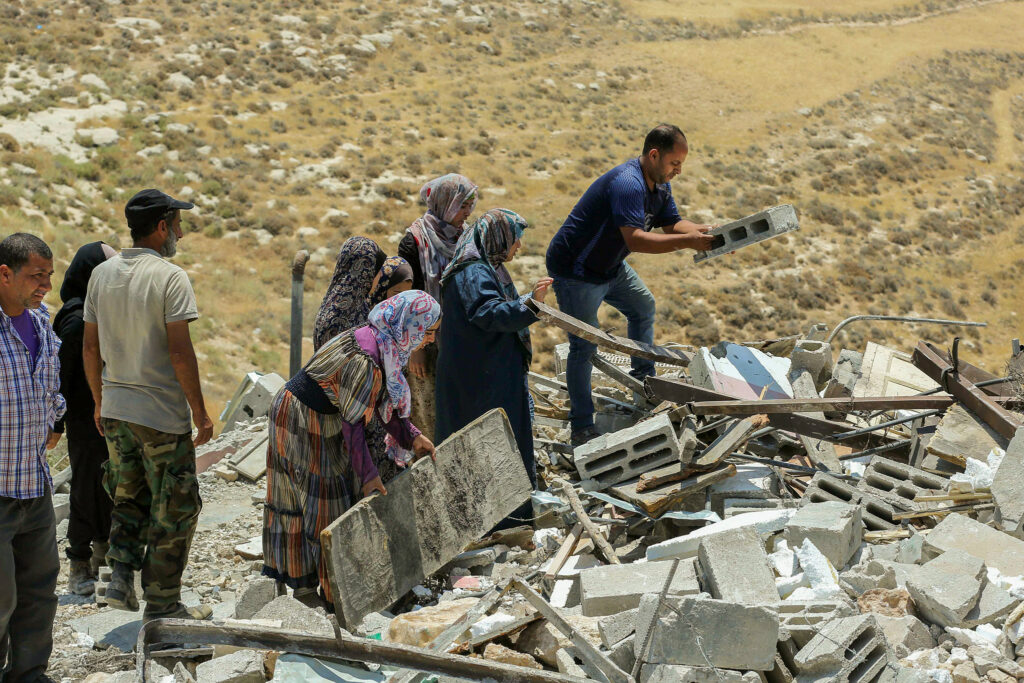 Punitive home demolitions only make up a tiny proportion of Israeli demolitions, despite the disproportionate Israeli media focus on such incidents. The demolition of property in reaction to a crime constitutes collective punishment, and is illegal under international law.

The yearly demolition totals have fluctuated throughout the decade. In the West Bank, the yearly figures held steady at around 400-600 demolitions per year until 2016, when the total soared to 904 demolitions in the space of 12 months. When asked about the increase at the time, the Coordinator for Government Affairs in the Territories provided a boilerplate response about enforcing the law in Area C. The following two years marked a drastic decrease, with 277 and 283 structures demolished in 2017 and 2018, before the number rose to 405 in 2019.

The number of demolitions in East Jerusalem has increased throughout the decade. While from 2010-2015 the year totals ranged between around 40 and 100 demolitions, 2016 saw 190 structures destroyed — in keeping with the overall spike across the occupied territories. In the three years since, the figures have climbed back up, culminating in a decade high of 201 structures demolished in 2019.

When questioned over the extent of its destruction of Palestinian property in the occupied territories, the Israeli government invariably responds that it is merely enforcing the law, as the structures in question were built without construction permits. However, since the signing of the Oslo Accords in the mid-1990s, which divided the West Bank into Areas A, B and C, Israel has only approved around five percent of Palestinian requests for building permits. Between 2010 and 2014, that figure was 1.5 percent, according to the UN.

In 2016, the number of building permits issued to Palestinians by the Civil Administration — the arm of the Israeli Ministry of Defense responsible for administering the occupation — rose significantly, from nine permits in 2014 and seven in 2015, to 37 in the first half of 2016. This figure appears to be at odds with the dramatic increase in demolitions for the same year. However, as Alon Cohen-Lifshitz wrote on this site in early 2017, the increased granting of permits was actually in keeping with the jump in demolitions. The permits were issued in response not to requests filed by Palestinians, but by the Civil Administration itself. 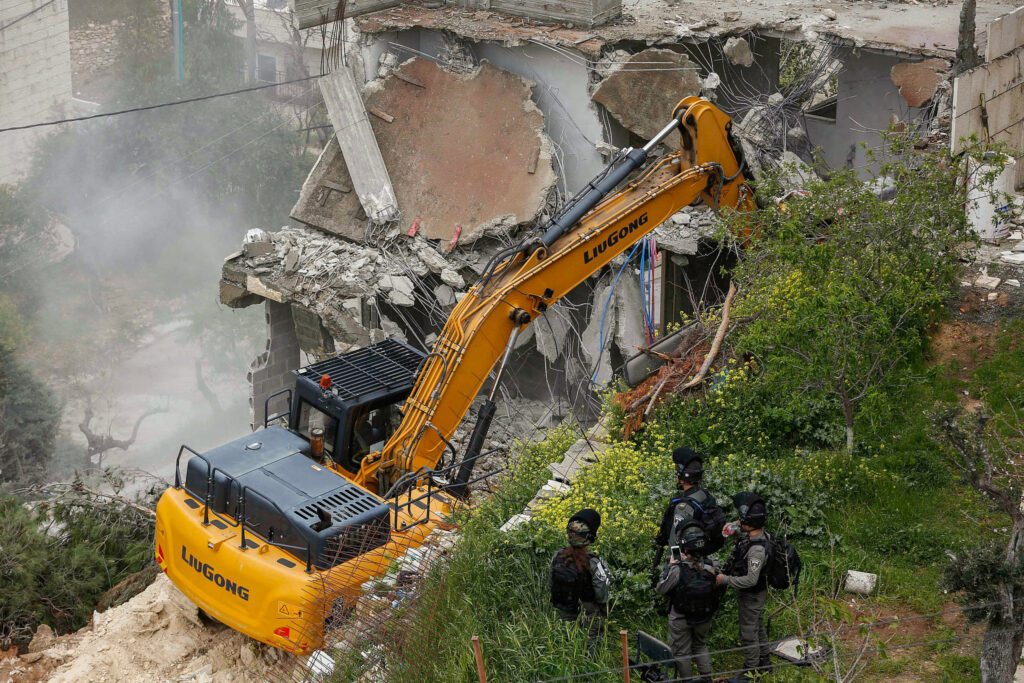 In other words, the Israeli government gave itself permission to build on behalf of Palestinians, with a very specific location in mind — Al-Jabal, a Bedouin village in Area C. Israel built the village in 1996 to receive the Jahalin tribe after forcibly removing them from their land (which they had been living on since being expelled from the Negev in 1948), so that the Ma’ale Adumim settlement could expand in their place.

This specific example demonstrates the broader implications of Israel’s demolition regime in the West Bank and East Jerusalem. While each destruction — especially if it is a home demolition — is a devastating event for individual Palestinian families, it also contributes to a wider process that seeks to concentrate Palestinians in ever-smaller areas while maximizing the space into which Israeli settlements can expand.

The destruction of Palestinian property and the denial of building permits are complementary aspects of a system that is actively pursuing a war of attrition against Palestinians under occupation, threatening not only individual homes facing demolition, but also entire communities — such as, for example, Khan al-Ahmar, one of numerous Bedouin locales facing expulsion to another area of the West Bank, designated by Israel. The destruction of Khan al-Ahmar has, in the past few days, been put on hold in light of the International Criminal Court’s potential investigation of Israeli and Palestinian war crimes.

The boundaries of Areas A, B and C further demonstrate the inner logic of this system: many of Areas A and B’s borders hug tightly to the edge of densely-populated Palestinian cities, while Area C includes vast expanses of open space — land which should be available to accommodate natural growth of both urban and rural Palestinian communities, but which instead has been earmarked for the almost exclusive use of Israeli settlements.

The statistics from a decade of demolition in the West Bank and East Jerusalem are stark: thousands of structures destroyed, and thousands of lives upended. But even these figures do not represent the full scale of what is at stake as a result of Israel’s two-handed demolition and permit regime in the occupied territories. This regime’s activities have proliferated to the extent that annexation — the decades-long project of the Israeli right — no longer represents a drastic leap forward for Israel’s control over the West Bank, but rather the formalization of a reality that has long been in place.

Natasha Roth-Rowland is a History PhD student at the University of Virginia, where she researches and writes about the Jewish far-right in Israel-Palestine and the U.S. She previously spent several years as a writer, editor, and translator in Israel-Palestine, and her work has appeared in The Daily Beast, the London Review of Books Blog, Haaretz, The Forward, and Protocols. She writes under her family’s true last name in memory of her grandfather, Kurt, who was forced to change his last name to ‘Rowland’ when seeking refuge in the UK during WW2.