With Suleimani Assassination, Trump Is Doing the Bidding of Washington’s Most Vile Cabal 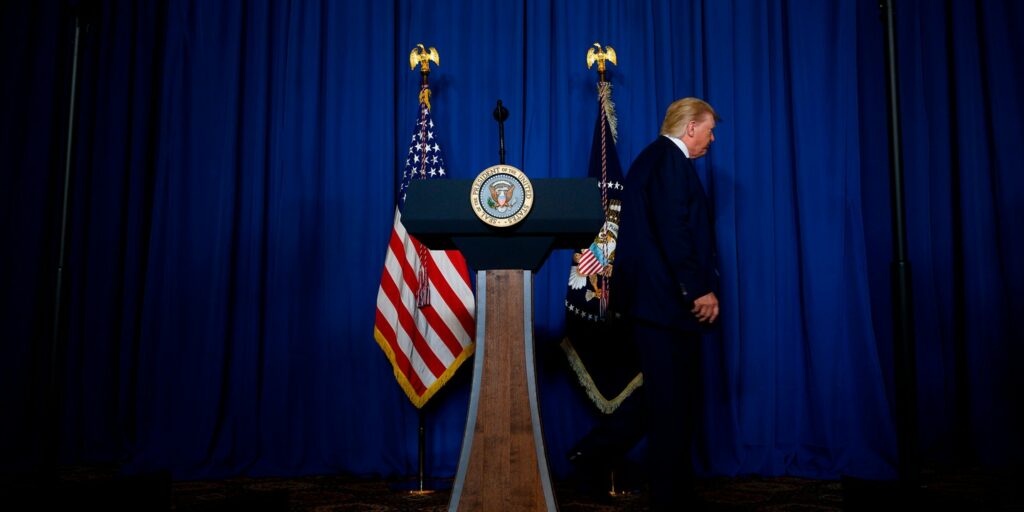 3 Jan 2020 – While the media focus for three years of the Trump presidency has centered around “Russia collusion” and impeachment, the most dangerous collusion of all was happening right out in the open — the Trump/Saudi/Israel/UAE drive to war with Iran.

On August 3, 2016 — just three months before Donald Trump would win the Electoral College vote and ascend to power — Blackwater founder Erik Prince arranged a meeting at Trump Tower. For decades, Prince had been agitating for a war with Iran and, as early as 2010, had developed a fantastical proposal for using mercenaries to wage it.

At this meeting was George Nader, an American citizen who had a long history of being a quiet emissary for the United States in the Middle East. Nader, who had also worked for Blackwater and Prince, was a convicted pedophile in the Czech Republic and is facing similar allegations in the United States. Nader worked as an adviser for the Emirati royals and has close ties to Mohammed bin Salman, the Saudi crown prince.

There was also an Israeli at the Trump Tower meeting: Joel Zamel. He was there supposedly pitching a multimillion-dollar social media manipulation campaign to the Trump team. Zamel’s company, Psy-Group, boasts of employing former Israeli intelligence operatives. Nader and Zamel were joined by Donald Trump Jr. According to the New York Times, the purpose of the meeting was “primarily to offer help to the Trump team, and it forged relationships between the men and Trump insiders that would develop over the coming months, past the election and well into President Trump’s first year in office.”

One major common goal ran through the agendas of all the participants in this Trump Tower meeting: regime change in Iran. Trump campaigned on belligerence toward Iran and trashing the Obama-led Iran nuclear deal, and he has followed through on those threats, filling his administration with the most vile, hawkish figures in the U.S. national security establishment. After appointing notorious warmonger John Bolton as national security adviser, Trump fired him last September. But despite reports that Trump had soured on Bolton because of his interventionist posture toward Iran, Bolton’s firing merely opened the door for the equally belligerent Mike Pompeo to take over the administration’s Iran policy at the State Department. Now Pompeo is the public face of the Suleimani assassination, while for his part, the fired Bolton didn’t want to be left out of the gruesome victory lap:

Congratulations to all involved in eliminating Qassem Soleimani. Long in the making, this was a decisive blow against Iran's malign Quds Force activities worldwide. Hope this is the first step to regime change in Tehran.

Trump, who had no idea who Qassim Suleimani was until it was explained to him live on the radio by conservative journalist Hugh Hewitt in 2015, didn’t seem to need many details to know that he wanted to crush the Iranian state.

Much as the neoconservatives came to power in 2001 after the election of George W. Bush with the goal of regime change in Iraq, Trump in his bumbling way assembled a team of extremists who viewed him as their best chance of wiping the Islamic Republic of Iran off the map.

While Barack Obama provided crucial military and intelligence support for Saudi Arabia’s scorched earth campaign in Yemen, which killed untold numbers of civilians, Trump escalated that mass murder in a blatant effort to draw Iran militarily into a conflict. That was the agenda of the gulf monarchies and Israel, and it coincided neatly with the neoconservative dreams of overthrowing the Iranian government. As the U.S. and Saudi Arabia intensified their military attacks in Yemen, Iran began to insert itself more and more forcefully into Yemeni affairs, though Tehran was careful not to be tricked into offering this Trump/Saudi/UAE/Israel coalition a justification for wider war. 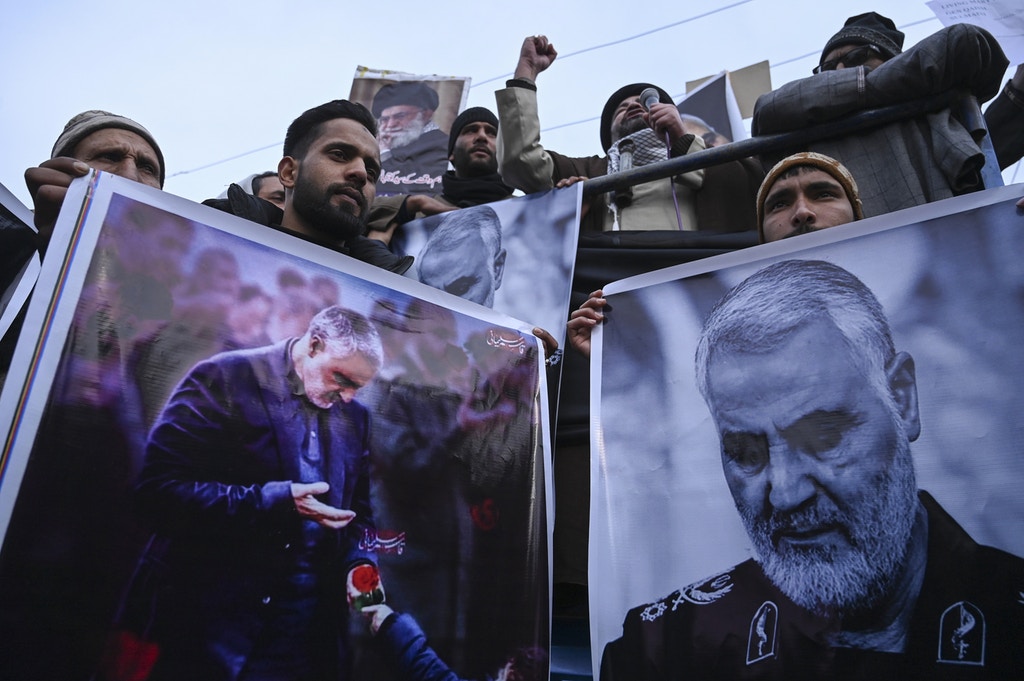 Protesters shout slogans against the United States and Israel as they hold posters with the image of top Iranian commander Qassim Suleimani, who was killed in a U.S. airstrike in Iraq, and Iranian President Hassan Rouhani during a demonstration in the Kashmiri town of Magam on Jan. 3, 2020.
Photo: Tauseef Mustafa/AFP/Getty Images

The assassination of Suleimani — a popular figure in Iran who is viewed as one of the major drivers of ISIS’s defeat in Iraq — was one of only a handful of actions that the U.S. could have taken that would almost certainly lead to a war with Iran. This assassination, reportedly ordered directly by Trump, was advocated by the most dangerous and extreme players in the U.S. foreign policy establishment with that exact intent.

Assassination has been a central component of U.S. policy for many decades, though it has been whitewashed and normalized throughout history, most recently with Obama’s favored term, “targeted killings.” The U.S. Congress has intentionally never legislated the issue of assassination. Lawmakers have avoided even defining the word “assassination.” While every president since Gerald Ford has upheld an executive order banning assassinations by U.S. personnel, they have each carried out assassinations with little to no congressional outcry.

As I wrote in August 2017, reflecting on our Drone Papers series from two years earlier, “The Obama administration, by institutionalizing a policy of drone-based killings of individuals judged to pose a threat to national security — without indictment or trial, through secret processes — bequeathed to our political culture, and thus to Donald Trump, a policy of assassination, in direct violation of Executive Order 12333 and, moreover, the Fifth Amendment of the U.S. Constitution. To date, at least seven U.S. citizens are known to have been killed under this policy, including a 16-year-old boy. Only one American, the radical preacher Anwar al-Awlaki, was said to have been the ‘intended target’ of a strike.”

There’s no justification for assassinating foreign officials, including Suleimani.

While many Democratic politicians are offering their concerns about the consequences of Suleimani’s assassination, they are prefacing it with remarks about how atrocious Suleimani was. Framing his assassination that way ultimately benefits the extremist cabal of foreign policy hawks who agitated for this very moment to arrive. There’s no justification for assassinating foreign officials, including Suleimani. This is an aggressive act of war, an offensive act committed by the U.S. on the sovereign territory of a third country, Iraq. This assassination and the potential for a war it raises are, unfortunately, consistent with more than half a century of U.S. aggression against Iran and Iraq.

For three years, many Democrats have told the country that Trump is the gravest threat to a democratic system we have faced. And yet many leading Democrats have voted consistently to give Trump unprecedented military budgets and surveillance powers.

Five months ago, California Democratic Rep. Ro Khanna offered an amendment to the National Defense Authorization Act that would have prohibited this very type of action, but it was removed from the final bill. “Any member who voted for the NDAA — a blank check — can’t now express dismay that Trump may have launched another war in the Middle East,” Khanna wrote on Twitter after Suleimani’s assassination. “My Amendment, which was stripped, would have cut off $$ for any offensive attack against Iran including against officials like Soleimani.”

Trump is responsible for whatever comes next. But time and again, the worst foreign policy atrocities of his presidency have been enabled by the very politicians who claim to want him removed from office.

One Response to “With Suleimani Assassination, Trump Is Doing the Bidding of Washington’s Most Vile Cabal”