21 Feb 2020 – Western news media are once again distorting the conflict in Syria with lopsided coverage this week, claiming to focus their concern on a humanitarian crisis in the northwest of the country.

Outlets such as the New York Times and the BBC, among others, claimed that 900,000 civilians are fleeing violence brought on by Syrian state forces and their Russian ally continuing an offensive against “rebels”. The implication being that responsibility for immense humanitarian suffering was due to callous Syrian and Russian military actions. The NY Times described the plight of refugees with emotive words, saying, “it’s like the end of the world.” 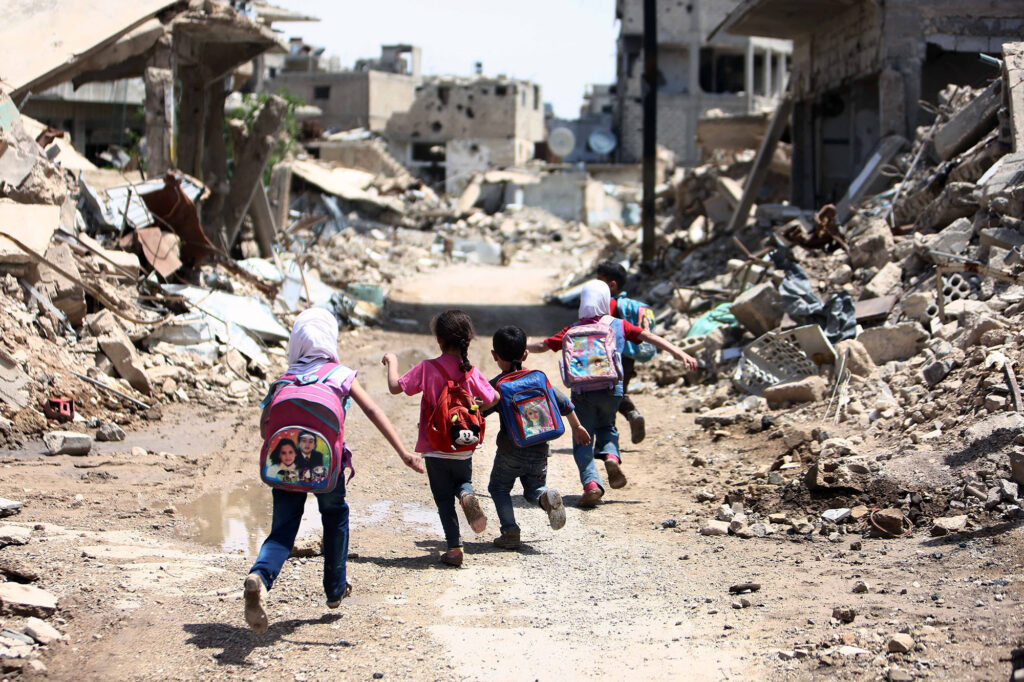 Syrian schoolchildren run past heavily damaged buildings in the rebel-held are of Jobar, on the eastern outskirts of the capital Damascus, on April 30, 2016.
AMER ALMOHIBANY/AFP/Getty Images)

No-one doubts that there is humanitarian plight from violence and displacement. But what the Western media are engaging in is a gross and nauseating distortion of what is really going on in Syria. It is typical of the way Western corporate media have been lying about the war in that country for the past nearly nine years.

It is by now untenable for Western media to spin the fictional narrative about “moderate rebels” fighting against a “cruel dictatorship”. The supposed “rebels” have vanished like the chimera they always were. What is left are the remnants of terror groups that are concentrated in northwest Syria. The dominant component is Hayat Tahrir al-Sham, formerly Al Nusra Front, an offshoot of Al Qaeda, like Islamic State. These are internationally proscribed terror networks which have carried out the most hideous, barbaric cruelties against civilians.

Unable any longer to launder the bloody image of the terrorists and retail them as “moderate rebels”, the Western media are now laying on the “humanitarian emotion” as a way to undermine the sovereign right of the Syrian army to defeat and rid the country of the terror scourge.

The Syrian army has already largely eradicated this scourge from most of the country. The last remaining hold-out for the terrorists is in the northwest region of Idlib and Aleppo countryside.

Many of the civilians caught up in the conflict are being used as human shields by the militant groups to prevent Syrian state forces advancing towards the final endgame. Commendably, the Syrian army and its Russian ally have deployed valor and painstaking care to liberate terror-held areas with minimal civilian casualties. Again, Western media have functioned as propagandists for the terror groups and their White Helmet agents by airing febrile claims of atrocities committed against civilians by the Syrian and Russian forces. 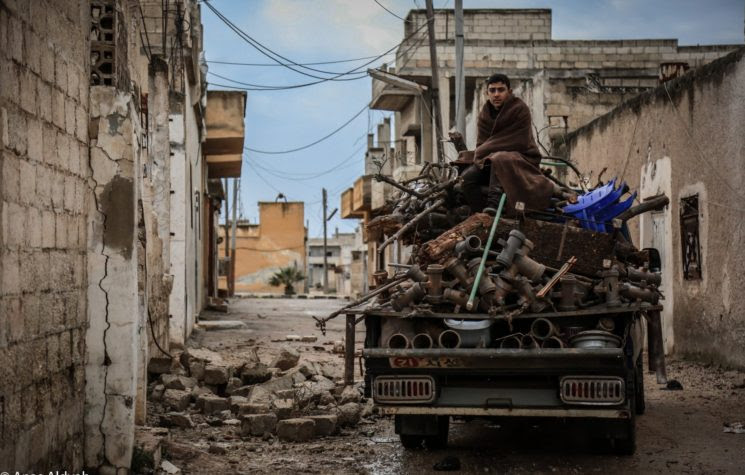 Two significant events happened this week, both of which were largely ignored by Western media, which gives an indication of their duplicitous political agenda.

The Syrian army routed the terror groups from dozens of villages and towns in Aleppo countryside. What then followed were huge celebrations by civilians in Aleppo city because the terrorists would no longer be able to launch deadly rocket and mortar attacks on residents. It was these attacks over the past year in violation of countless ceasefire attempts by the government in Damascus that finally prompted the offensive by the Syrian army to eliminate the terrorist remnants.

The second significant event was the reopening of Aleppo international airport to flights. The airport was not able to operate despite the city having been fully liberated at the end of 2016 by the Syrian army and its Russian ally. The relentless shelling by terror groups from the surrounding countryside meant that Syria’s second city had to keep its airport closed for the past three years (in addition to the five years before liberation). As a result of finally clearing Aleppo province of militants this week, the city’s airport is now open for business. Life is returning to some normality.

Back when Aleppo city was liberated in 2016, the Western media again ignored the celebrations of the civilians overjoyed from at last being freed from the besieging jihadist groups which had held them under a veritable reign of terror. The Western media tried to spin that liberation as an impending massacre against civilians and “rebels” committed by the Syrian army and Russian forces. None of the Western media ever followed up with reports on real life in Aleppo following the liberation. The reality no doubt would have been too much of a contradiction for their fictive propaganda narrative.

Likewise this week, Western media roundly ignored the realities on the ground in Syria, by trying to repackage their “humanitarian crisis” fabulation.

The fact is since the beginning of the war in March 2011 Western governments and NATO members have been covertly arming the terror groups which have inflicted so much suffering and horror on Syria in a nefarious scheme for regime change in Damascus. The Syrian people, their government and army have bravely resisted this criminal conspiracy for the most part of a decade and are now bringing it to a final end. Russia, Iran and Lebanon’s Hezbollah deserve credit for their steadfast support to the Syrian nation against the foreign-backed aggression.

Turkey, a NATO member, is currently most visibly exposed as being an accomplice with the terror groups that are being rolled up by the Syrian army. But the United States, Britain and France have all played a dirty role in fomenting the war in Syria. Western media do not give this coverage because the appalling culpability and criminality of Western governments is too shameful to contemplate or expose to the public.

If Western media were genuinely concerned about “humanitarian crisis”, they would do well to report on how their governments have created the suffering and misery in Syria. Why don’t they report extensively on how U.S. military forces are illegally occupying the country and looting Syria’s oil fields which is preventing the nation accessing its natural wealth to fund reconstruction and supply returning refugees with fuel? Why don’t Western media report on how the U.S. and the European Union are tightening economic sanctions on Syria, again hampering a war-torn nation from reconstructing?

Syria is a case study of how Western news media – despite pretensions of ethics and journalism – serve as propaganda tools. And more than propaganda tools, they are complicit in the war crimes perpetrated against Syria because they have knowingly distorted the truth to cover up for their criminal governments.