The Vermont senator made it clear that he will not attend the AIPAC event for political, not agenda-related, reasons. 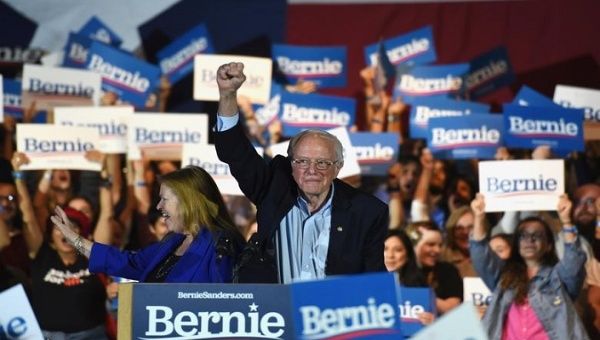 Two days after becoming the undisputed favorite in the Democratic race with a solid victory in Nevada’s caucuses, the Vermont senator made it clear that he will not attend the AIPAC event for political, not agenda-related, reasons.

“The Israeli people have the right to live in peace and security. So do the Palestinian people,” Sanders wrote on Twitter on Sunday.

“I remain concerned about the platform that AIPAC offers to leaders who express intolerance and oppose the basic rights of Palestinians. For that reason, I will not be attending your conference.”

The Israeli people have the right to live in peace and security. So do the Palestinian people. I remain concerned about the platform AIPAC provides for leaders who express bigotry and oppose basic Palestinian rights. For that reason I will not attend their conference. 1/2

The progressive candidate renewed his pledge to support the rights of both Palestinians and Israelis, saying he would do “everything possible” to bring peace to the region if elected president.

AIPAC issued a very direct response for Sanders, noting the attendance of many of his Democratic colleagues as well as other participants.

“By participating in such an odious attack on this American political event, Senator Sanders is insulting his own colleagues and the millions of Americans who support Israel. Truly shameful,” the group said in a statement, adding that Sanders has “never attended” the pro-Israel conference.

Sanders won the New Hampshire and Nevada Democratic contests, after winning the popular vote in Iowa, and has proposed foreign policy lines outside the mainstream of U.S. politics, including a promise to pressure the Israeli government to end the occupation and improve the humanitarian crisis in Gaza.

U.S. Senator Bernie Sanders is campaigning against a war on Iran.