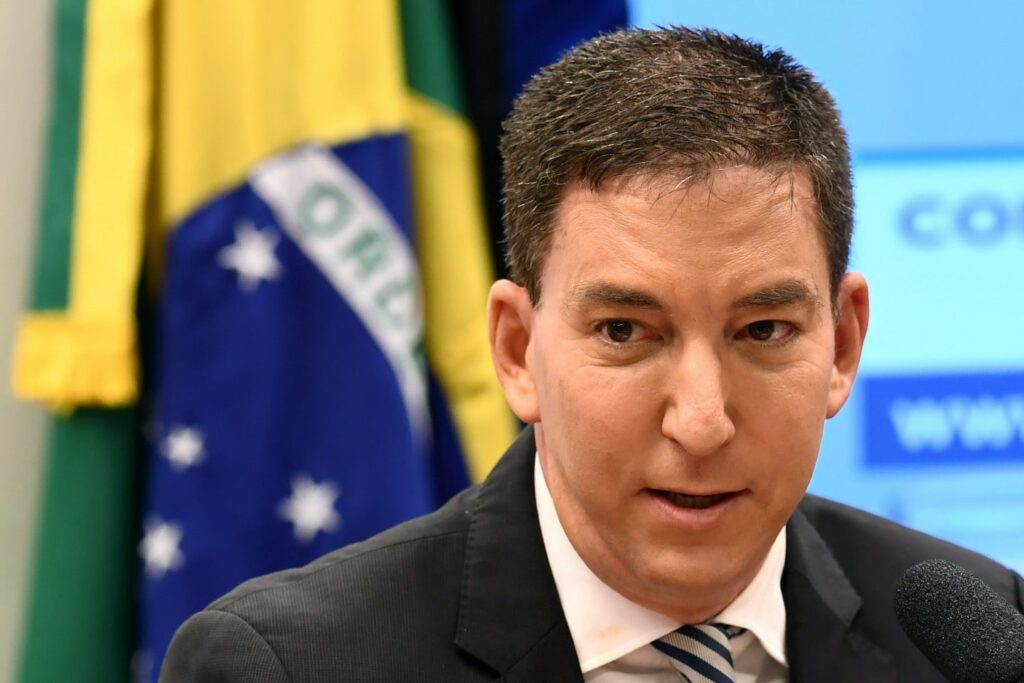 American journalist Glenn Greenwald during a hearing in Brasilia on 25 June 2019. (Evaristo Sa/AFP via Getty Images)

27 Jan 2020 – On Tuesday [21 Jan], Brazilian federal prosecutors filed criminal charges against Glenn Greenwald, the Pulitzer-Prize winning journalist and founding editor at the Intercept Brazil, for his explosive reporting on corruption at the very highest levels of Brazil’s government.

The public importance of these stories was staggering. For example, one of the revelations exposed how a well-known judge named Sergio Moro had rigged a trial to jail the country’s most popular political figure in the run-up to the presidential election, clearing a path to victory for Jair Bolsonaro, who then promptly rewarded Moro with control of the Ministry of Justice and Public Security.

Given this context, it’s understandable why a significant portion of Brazilian politicians — including even some aligned with the disgraced Bolsonaro regime — have chosen to stand shoulder-to-shoulder with press freedom organizations in denouncing these preposterous “cybercrime” charges as an act of political repression.

Yet as ridiculous as these charges are, they are also dangerous — and not only to Greenwald: They are a threat to press freedom everywhere.

The legal theory used by the Brazilian prosecutors — that journalists who publish leaked documents are engaged in a criminal “conspiracy” with the sources who provide those documents — is virtually identical to the one advanced in the Trump administration’s indictment of WikiLeaks’ founder Julian Assange in a new application of the historically dubious Espionage Act.

In each case, the charges came as an about-face from an earlier position. The federal police in Brazil stated as recently as December that they had formally considered whether Greenwald could be said to have participated in a crime, and unequivocally found that he had not. That rather extraordinary admission itself followed an order in August 2019 from a Brazilian Supreme Court judge — prompted by displays of public aggression against Greenwald by Bolsonaro and his allies — explicitly barring federal police from investigating Greenwald altogether. The Supreme Court judge declared that doing so would “constitute an unambiguous act of censorship.”

For Assange, the Espionage Act charges arrived years after the same theory had reportedly been considered — and rejected — by the former president Barack Obama’s Justice Department. Though the Obama administration was no fan of WikiLeaks, the former spokesman for Obama’s Attorney General Eric Holder later explained. “The problem the department has always had in investigating Julian Assange is there is no way to prosecute him for publishing information without the same theory being applied to journalists,” said the former Justice Department spokesman Matthew Miller. “And if you are not going to prosecute journalists for publishing classified information, which the department is not, then there is no way to prosecute Assange.”

This is to say that though the Obama White House used the Espionage Act to charge more reporters’ sources than all previous administrations combined, it drew the line at directly prosecuting those reporters and their news organizations. When I came forward in 2013 to reveal the global mass surveillance scandal, I understood these unwritten rules. As the same Glenn Greenwald patiently listened to me explain the classified evidence detailing the government’s crimes, everyone in the room knew — or we thought we knew — that as the original source of these disclosures, the consequences for our little truth-telling project would be mine alone.

The Trump administration, however, with its disdain for press freedom matched only by its ignorance of the law, has respected no such limitations on its ability to prosecute and persecute, and its unprecedented decision to indict a publisher under the Espionage Act has profoundly dangerous implications for national security journalists around the country. Though I believe that Greenwald would have reported the mass surveillance story even if it meant risking prison time, can we say the same of every member of the press?

There is another similarity in the cases of Greenwald and Assange: Their relentless crusades have rendered them polarizing figures (including, it may be noted, to each other). Some have been alienated by publishing information that powerful factions had concealed for political purposes, others by expressing heretical opinions on the most public platforms. It is likely that authorities in both countries believed the public’s fractured opinions of their perceived ideologies would distract the public from the broader danger these prosecutions pose to a free press.

Yet the charges against each of these men have been widely recognized for what they are: efforts to deter the most aggressive investigations by the most fearless journalists, and to open the door to a precedent that could soon still the pens of even the less cantankerous. In the hours after each set of charges was announced, dozens of civil liberties groups and publishers came forward to denounce them and to decry the chilling effect they were intentionally engineered to produce.

The most essential journalism of every era is precisely that which a government attempts to silence. These prosecutions demonstrate that they are ready to stop the presses — if they can.

Born in North Carolina in 1983 Edward Snowden, former CIA officer and whistleblower, worked for the National Security Agency through subcontractor Booz Allen in the NSA’s Oahu (Honolulu) office, where he began collecting top-secret documents regarding NSA surveillance practices that he found disturbing. After he fled to Hong Kong  newspapers began printing documents that he leaked to them, many detailing invasive spying practices against American citizens, world leaders, corporations and foreign governments through metadata collection of phone calls, email messages, social media activities, plus dissemination of malicious software and viruses throughout computers worldwide. The U.S. has charged Snowden under the Espionage Act but he is hailed around the world as a hero. He remains in exile in Russia, with the U.S. government working on extradition. Snowden is the author of Permanent Record and is the president of Freedom of the Press Foundation, a nonprofit that defends public-interest journalism in the 21st century.