Saint-Louis, the old colonial capital of Senegal, faces a flooding threat that has already seen entire villages lost to the Atlantic. 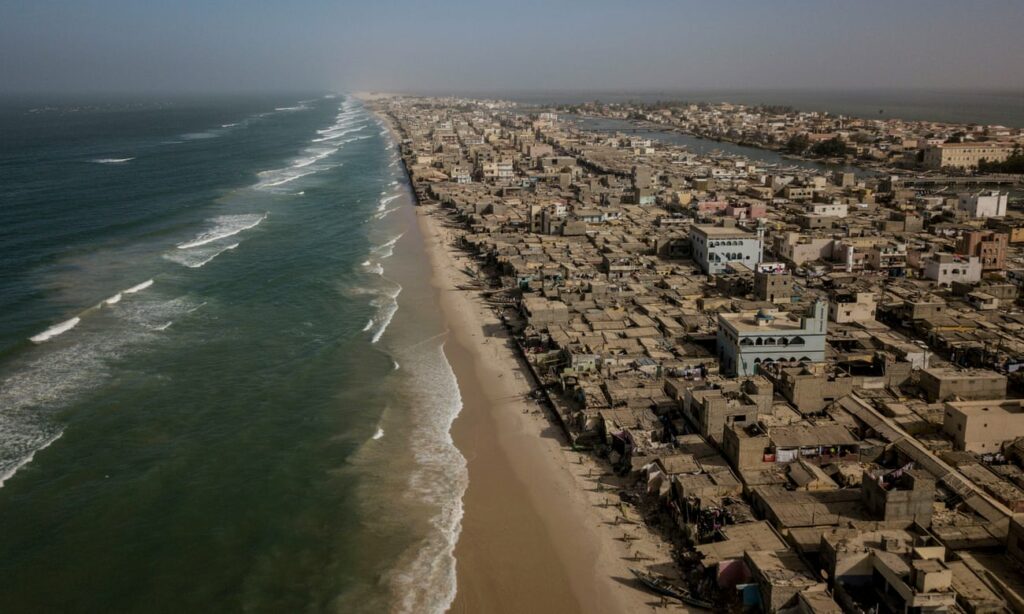 28 Jan 2020 – Ameth Diagne points to a single tree submerged in the ocean. It is barely visible from the patch of land where he is standing, 50 metres away. The few branches emerging from the water mark the place where he proposed to his wife 35 years earlier.

It used to be the town square of Doun Baba Dieye, a vibrant fishing community on the outskirts of Saint-Louis in northern Senegal. The village has been wiped off the map, with only the tree and crumbling walls of an abandoned school remaining as testament to its existence. Everything else is 1.5 metres under water. 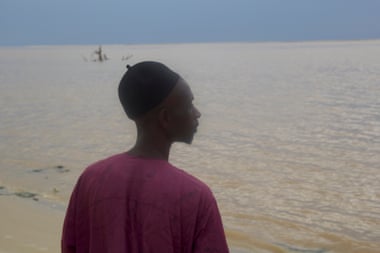 Diagne, the former village chief of Doune Baba Dieye, can still see the tip of the tree that marks where he proposed to his wife. Photograph: Attila Kálmán

“This was home. I was born here. Everything which was important to me happened here,” says Ameth, the former village chief.

Doun Baba Dieye is in the southern part of Langue de Barbarie, a thin, sandy strip of land protecting Saint-Louis, former colonial capital of Senegal, from the ocean. Saint-Louis, a city of 230,000 and a Unesco world heritage site, is nestled between the mouth of the Senegal river and the Atlantic.

The French chose Saint-Louis as the capital because of its strategic location, which allowed the city to flourish in colonial times. But today the “Venice of Africa” is being eaten up by the rising waters. Crossing the Faidherbe bridge, which connects the colourful city centre to the mainland, it seems as if you can almost touch the water. This state of a permanent flood alert has become the city’s new normal.

In Saint-Louis, the consequences of climate crisis are tangible: thousands of people uprooted; houses destroyed; hundreds of children attending classes in the evening instead of in the morning because their school has been swept into the ocean. The World Bank, which recently allotted €24m (£20m) to combat the effects of climate change in Saint-Louis, estimates that 10,000 people in the city are either already displaced or live within 20 metres of the waterline, the high-risk zone.

And this is just the beginning. According to a study commissioned by the Senegalese government, 80% of Saint-Louis territory will be at risk of flooding by 2080, and 150,000 people will have to relocate. Most of west Africa’s coastal cities, home to 105 million people, face a similar threat. 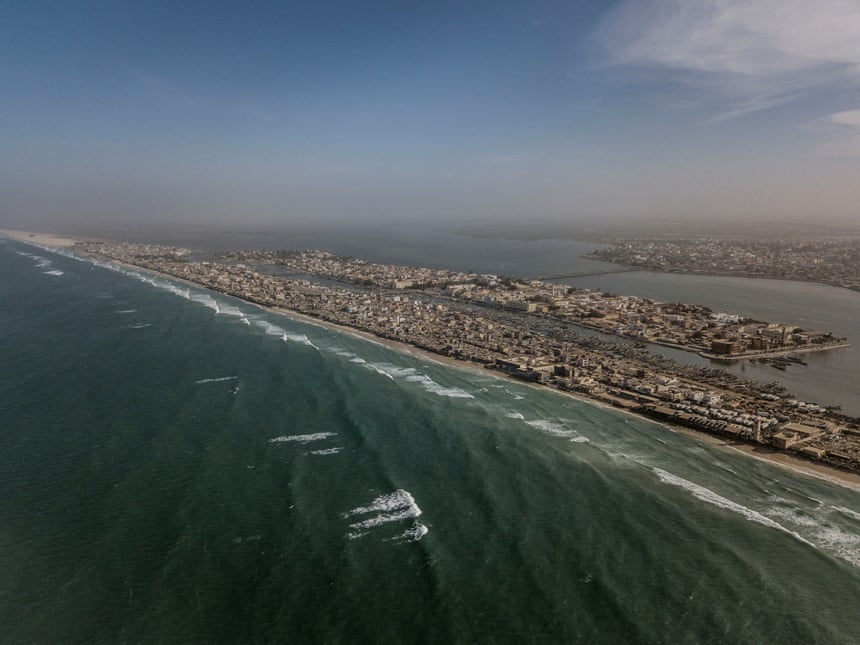 Saint-Louis is surrounded on both sides by water. Photograph: Sylvain Cherkaoui/Cosmos

Mangone Diagné, from the regional division of Senegal’s environment ministry, puts it bluntly: “Saint-Louis is surrounded by water and is incredibly vulnerable to climate change. But the damage was caused both by nature and by men.”

“We live too far from the ocean now. I was not only deprived of my home, but also of my livelihood.”
— Ameth Diagne, fisherman

He is referring to an engineering mistake, which contributed to the deterioration of the Langue de Barbarie. In 2003, heavy rainfall caused the Senegal river to rise rapidly, putting Saint-Louis at risk of flooding. As a quick fix, local government dug a four-metre-wide breach, or canal, cutting through the Langue de Barbarie. The effect has been the opposite of the one intended. Although at first the river level dropped, the breach quickly started to expand. It is now 6km wide and has cut off part of the peninsula, turning it into an island – and flooding Doun Baba Dieye.

It has also upset the delicate balance of the local ecosystem. The canal brought seawater into the river, increasing its salinity level. This has affected the population of rare bird species and river fish – forcing fishermen to venture into Mauritanian waters, which is dangerous and illegal – as well as wiping out the coconut trees and mangroves that once protected the shores. Local crops, already destabilised by irregular rainy seasons and sand storms, were further damaged. 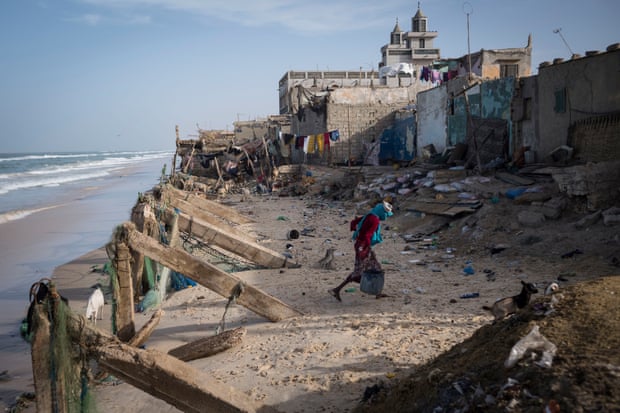 Inhabitants of the Langue de Barbarie have been fishing for centuries.
Photograph: Sylvain Cherkaoui/Cosmos

Ameth, along with more than 800 former inhabitants of Doun Baba Dieye, are among the victims forced to move away from the peninsula without any support from the state. “We are fishermen, we know the ocean, so we left at the good moment – and nobody got hurt,” says Ameth, before correcting himself: “We were fishermen.” Since his community was dispersed, Ameth’s fishing boat, a pirogue, remains largely unused: “We live too far from the ocean now. I was not only deprived of my home, but also of my livelihood.”

Inhabitants of the Langue de Barbarie are from the Lebou ethnic group who have been fishermen for centuries. Boys learn the necessary skills from an early age. But Ameth wants his sons to have an education: three of them are in primary school and two are at university. “For us Lebou, the ocean is our lifeblood. But it is hard to make a living as a fisherman today. This is why so many young men from our community are migrating. I want my sons to have a choice.”

North of the Langue de Barbarie peninsula, the fishing district of Guet N’dar was hit by a 4-metre wave one night in September 2017. The ensuing flood affected more than 100 houses, a school, a mosque, and part of the cemetery. The homeless were put in a makeshift camp next to the airport. 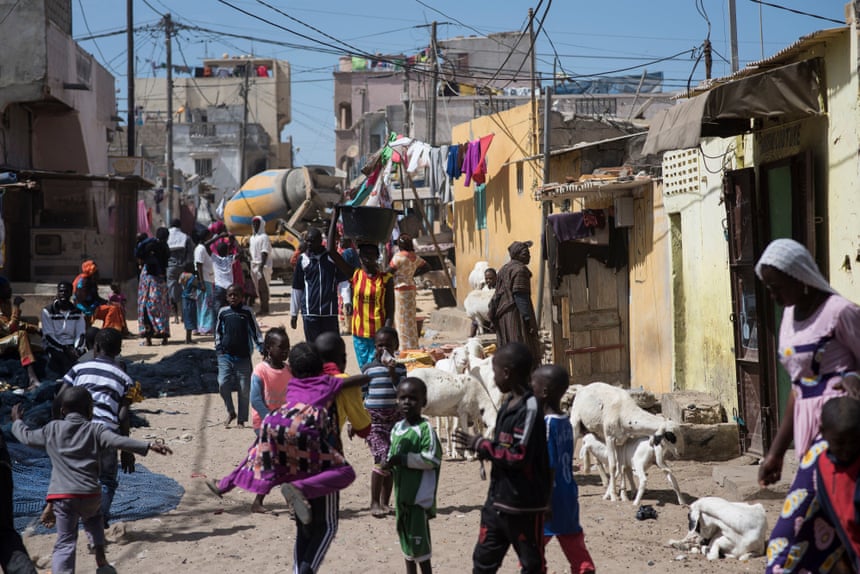 Guet N’dar is one of the most densely populated areas of the Langue de Barbarie. Photograph: Sylvain Cherkaoui/Cosmos

The ocean eventually receded, leaving a scene of devastation. Against the backdrop of crumbling walls and half-wrecked buildings, French president Emmanuel Macron visited in February 2018 and pledged an extra €15m to build a sea wall to protect the remaining infrastructure. But by April of that year, a part of the sea wall had collapsed, letting the ocean take over.

Ameth is counting neither on the World Bank, nor on Macron. Thanks to financing from the UN, he returns once a year to the place where his old village stood, and plants trees. He hopes that mangroves and filaos, an exotic species of pine, can stop the destruction of the shoreline.

“Although we had to move physically, my mind and spirit stayed here. And I hope one day I can move back,” he says.