19 Jan 2001 – Gandhiji was not awarded the Nobel Peace Prize because he refused to be converted among other factors such as ‘fighting’ (and winning!) against the British Empire. He was nominated in 1937, 1938, 1939, 1947 and, finally, a few days before he was murdered in January 1948.  Now that missionaries are spreading their tentacles far and wide in India converting people by allurement, inducement and fraud (In the northeast killings and threats are becoming commonplace) Gandhiji’s message is all the more relevant in understanding and reacting to this problem. Missionary Terrorism will become as dangerous as Islamic terrorism if ignored. 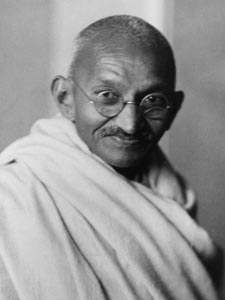 I Call Myself a Sanatani Hindu

I call myself a Sanatani Hindu, because I believe in the Vedas, the Upanishads, the Puranas, and all that goes by the name of Hindu scripture, and therefore in avataras and rebirth; I believe in the varnashrama dharma in a sense, in my opinion strictly Vedic but not in its presently popular and distorted crude sense; I believe in the protection of cow. I do not disbelieve in murti puja. (Young India: June 10, 1921)

Why I am Not a Convert

Hinduism as I know it entirely satisfies my soul, fills my whole being. When doubts haunt me, when disappointments stare me in the face, and when I see not one ray of light on the horizon, I turn to the Bhagavad Gita, and find a verse to comfort me; and I immediately begin to smile in the midst of overwhelming sorrow. My life has been full of tragedies and if they have not left any visible and indelible effect on me, I owe it to the teachings of the Bhagavad Gita. (Young India: June 8, 1925)

I Disbelieve in Conversion

I disbelieve in the conversion of one person by another. My effort should never to be to undermine another’s faith. This implies belief in the truth of all religions and, therefore, respect for them. It implies true humility. (Young India: April 23, 1931)

It is impossible for me to reconcile myself to the idea of conversion after the style that goes on in India and elsewhere today. It is an error which is perhaps the greatest impediment to the world’s progress toward peace. Why should a Christian want to convert a Hindu to Christianity? Why should he not be satisfied if the Hindu is a good or godly man? (Harijan: January 30, 1937)

No Such Thing as Conversion

I believe that there is no such thing as conversion from one faith to another in the accepted sense of the word. It is a highly personal matter for the individual and his God. I may not have any design upon my neighbour as to his faith which I must honour even as I honour my own. Having reverently studied the scriptures of the world I could no more think of asking a Christian or a Musalman, or a Parsi or a Jew to change his faith than I would think of changing my own. (Harijan: September 9, 1935)

No Conversion Designs upon Me

I am not interested in weaning you from Christianity and making you Hindu, and I do not relish your designs upon me, if you had any, to convert me to Christianity. I would also dispute your claim that Christianity is the only true religion. (Harijan: June 3, 1937)

Conversion must not mean denationalization. Conversion should mean a definite giving up of the evil of the old, adoption of all the good of the new and a scrupulous avoidance of everything evil in the new. Conversion, therefore, should mean a life of greater dedication to one’s country, greater surrender to God, greater self-purification. (Young India: August 20, 1925)

Aping of Europeans and Americans

As I wander about through the length and breath of India I see many Christian Indians almost ashamed of their birth, certainly of their ancestral religion, and of their ancestral dress. The aping of Europeans by Anglo-Indians is bad enough, but the aping of them by Indian converts is a violence done to their country and, shall I say, even to their new religion. (Young India: August 8, 1925)

Why Should I Change My Religion

I hold that proselytizing under the cloak of humanitarian work is unhealthy to say the least. It is most resented by people here. Religion after all is a deeply personal thing. It touches the heart.

Why should I change my religion because the doctor who professes Christianity as his religion has cured me of some disease, or why should the doctor expect me to change whilst I am under his influence? (Young India: April 23, 1931)

My fear is that though Christian friends nowadays do not say or admit it that Hindu religion is untrue, they must harbour in their breast that Hinduism is an error and that Christianity, as they believe it, is the only true religion. So far as one can understand the present (Christian) effort, it is to uproot Hinduism from her very foundation and replace it by another faith. (Harijan: March 13, 1937)

The first distinction I would like to make between your missionary work and mine is that while I am strengthening the faith of people, you (missionaries) are undermining it. (Young India: November 8, 1927)

Conversion nowadays has become a matter of business, like any other. India (Hindus) is in no need of conversion of this kind. Conversion in the sense of self-purification, self-realization is the crying need of the times. That however is never what is meant by proselytization. To those who would convert India (Hindus), might it not be said, “Physician, heal yourself.” (Young India: April 23, 1931)

When the missionary of another religion goes to them, he goes like a vendor of goods. He has no special spiritual merit that will distinguish him from those to whom he goes. He does however possess material goods which he promises to those who will come to his fold. (Harijan: April 3, 1937)

If I Had the Power and Could Legislate

If I had the power and could legislate, I should stop all proselytizing. In Hindu households the advent of a missionary has meant the disruption of the family coming in the wake of change of dress, manners, language, food and drink . (November 5, 1935)

The Only Begotten Son of God?

I regard Jesus as a great teacher of humanity, but I do not regard him as the only begotten son of God. That epithet in its material interpretation is quite unacceptable. Metaphorically we are all sons of God, but for each of us there may be different sons of God in a special sense. Thus for me Chaitanya may be the only begotten son of God. God cannot be the exclusive Father and I cannot ascribe exclusive divinity to Jesus. (Harijan: June 3, 1937)

It is my firm opinion that Europe (and the United States) does not represent the spirit of God or Christianity but the spirit of Satan. And Satan’s successes are the greatest when appears with the name of God on his lips. (Young India: September 8, 1920)

I consider western Christianity in its practical working a negation of Christ’s Christianity. I cannot conceive Jesus, if he was living in flesh in our midst, approving of modern Christian organizations, public worship, or ministry. (Young India: September 22, 1921)

Christianity in India has been inextricably mixed up for the last one hundred and fifty years with British rule. It appears to us as synonymous with materialistic civilization and imperialistic exploitation by the stronger white races of the weaker races of the world. Its contribution to India has been, therefore, largely negative. (Young India: March 21, 1929)

No Room for Them

Only the other day a missionary descended on a famine area with money in his pocket, distributed it among the famine stricken, converted them to his fold, took charge of their temple, and demolished it. This is outrageous. (Harijan: November 5, 1937)

Let the Hindu be a Better Hindu

I came to the conclusion long ago that all religions were true and also that all had some error in them, and whilst I hold by my own, I should hold others as dear as Hinduism. So we can only pray, if we are Hindus, not that a Christian should become a Hindu. But our innermost prayer should be a Hindu should be a better Hindu, a Muslim a better Muslim, a Christian a better Christian. (Young India: January 19, 1928)

If a person through fear, compulsion, starvation, or for material gain or consideration goes over to another faith, it is a misnomer to call it conversion. Most cases of conversion have been to my mind a false coin. I would therefore unhesitatingly re-admit to the Hindu fold all such repentants without much ado. If a man comes back to the original branch, he deserves to be welcomed in so far as he may deem to have erred, he has sufficiently purged himself of it when he repents his error and retraces his steps. (Collected Works: Vol. 66, pp. 163-164)

Stephen Knapp (Sri Nandanandana dasa) has dedicated himself to spreading the deepest and most practical levels of spiritual knowledge about the soul–our real identity. Though this world may give us numerous challenges, when we rise above the basic materialistic view and its limited search for solutions, our evolutionary development on all levels greatly accelerates. By recognizing that we are all spiritual beings who are, basically, attempting to achieve the same essentials for our existence–namely love, acceptance, harmony, peace, and happiness, not to mention the ordinary needs of food, water, clothing and shelter–we can reach a new level of cooperation with each other. Stephen has written many books on this and related subjects and studied with A. C. Bhaktivedanta Swami Prabhupada becoming initiated into the spiritual line of Brahma-Madhava-Gaudiya sampradaya. He is also president of the Vedic Friends Association. srinandan@aol.com