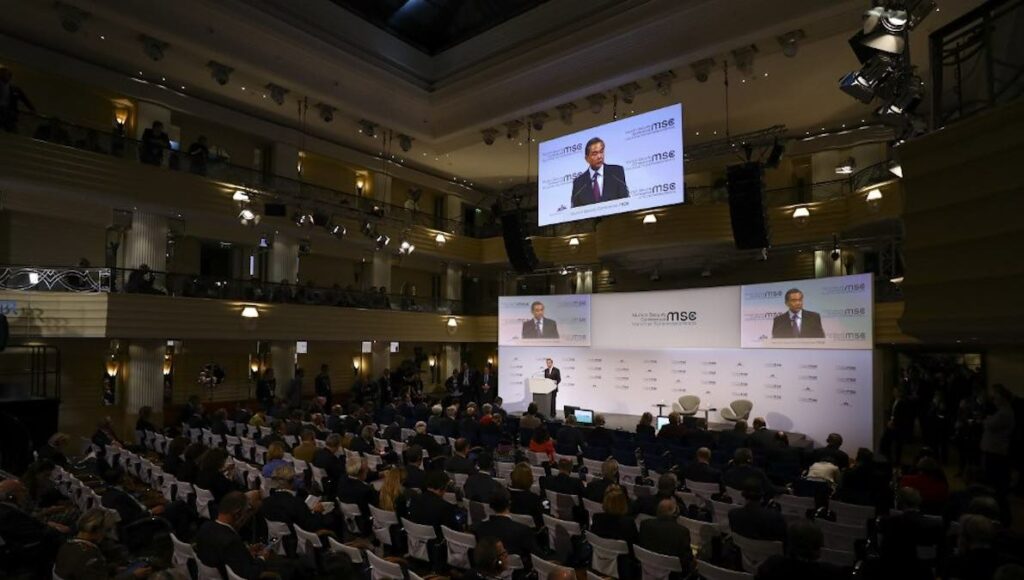 19 Feb 2020 – Few postmodern political pantomimes have been more revealing than the hundreds of so-called “international decision-makers,” mostly Western, waxing lyrical, disgusted or nostalgic over “Westlessness” at the Munich Security Conference.

“Westlessness” sounds like one of those constipated concepts issued from a post-party bad hangover at the Rive Gauche during the 1970s. In theory (but not French Theory) Westlessness in the age of Whatsapp should mean a deficit of multiparty action to address the most pressing threats to the “international order” – or (dis)order – as nationalism, derided as a narrow-minded populist wave, prevails.

Yet what Munich actually unveiled was some deep – Western – longing for those effervescent days of humanitarian imperialism, with nationalism in all its strands being cast as the villain impeding the relentless advance of profitable, neocolonial Forever Wars.

As much as the MSC organizers – a hefty Atlanticist bunch – tried to spin the discussions as emphasizing the need for multilateralism, a basket case of ills ranging from uncontrolled migration to “brain dead” NATO got billed as a direct consequence of “the rise of an illiberal and nationalist camp within the Western world.” As if this were a rampage perpetrated by an all-powerful Hydra featuring Bannon-Bolsonaro-Orban heads.

Far from those West-is-More heads in Munich is the courage to admit that assorted nationalist counter-coups also qualify as blowback for the relentless Western plunder of the Global South via wars – hot, cold, financial, corporate-exploitative.

For what it is worth, here’s the MSC report. Only two sentences would be enough to give away the MSC game: “In the post-Cold War era, Western-led coalitions were free to intervene almost anywhere. Most of the time, there was support in the UN Security Council, and whenever a military intervention was launched, the West enjoyed almost uncontested freedom of military movement.”

There you go. Those were the days when NATO, with full impunity, could bomb Serbia, miserably lose a war on Afghanistan, turn Libya into a militia hell and plot myriad interventions across the Global South. And of course none of that had any connection whatsoever with the bombed and the invaded being forced into becoming refugees in Europe.

In Munich, South Korean Foreign Minister Kang Kyung-wha got closer to the point when she said she found “Westlessness” quite insular as a theme. She made sure to stress that multilateralism is very much an Asian feature, expanding on the theme of ASEAN centrality.

Russian Foreign Minister Sergey Lavrov, with his customary finesse, was sharper, noting how “the structure of the Cold War rivalry is being recreated” in Europe. Lavrov was a prodigy of euphemism when he noted how “escalating tensions, NATO’s military infrastructure advancing to the East, exercises of unprecedented scope near the Russian borders, the pumping of defense budgets beyond measure – all this generates unpredictability.”

Yet it was Chinese State Councilor and Foreign Minister Wang Yi who really got to the  heart of the matter. While stressing that “strengthening global governance and international coordination is urgent right now,” Wang said, “We need to get rid of the division of the East and the West and go beyond the difference between the South and the North, in a bid to build a community with a shared future for mankind.”

“Community with a shared future” may be standard Beijing terminology, but it does carry a profound meaning as it embodies the Chinese concept of multilateralism as meaning no single state has priority and all nations share the same rights.

Wang went farther: The West – with or without Westlessness– should get rid of its subconscious mentality of civilization supremacy; give up its bias against China; and “accept and welcome the development and revitalization of a nation from the East with a system different from that of the West.” Wang is a sophisticated enough diplomat to know this is not going to happen.

Wang also could not fail to raise the Westlessness crowd’s eyebrows to alarming heights when he stressed, once again, that the Russia-China strategic partnership will be deepened – alongside exploring “ways of peaceful coexistence” with the US and deeper cooperation with Europe.

What to expect from the so-called “system leader” in Munich was quite predictable. And it was delivered, true to script, by current Pentagon head Mark Esper, yet another Washington revolving door practitioner.

All Pentagon talking points were on display. China is nothing but a rising threat to the world order – as in “order” dictated by Washington. China steals Western know-how; intimidates all its smaller and weaker neighbors; seeks an “advantage by any means and at any cost.”

As if any reminder to this well-informed audience was needed, China was once again placed at the top of the Pentagon’s “threats,” followed by Russia, “rogue states” Iran and North Korea, and “extremist groups.” No one asked whether al-Qaeda in Syria is part of the list.

The “Communist Party and its associated organs, including the People’s Liberation Army,” were accused of “increasingly operating in theaters outside China’s borders, including in Europe.” Everyone knows only one “indispensable nation” is self-authorized to operate “in theaters outside its borders” to bomb others into democracy.

No wonder Wang was forced to qualify all of the above as “lies”: “The root cause of all these problems and issues is that the US does not want to see the rapid development and rejuvenation of China, and still less would they want to accept the success of a socialist country.”

So in the end Munich did disintegrate into the catfight that will dominate the rest of the century. With Europe de facto irrelevant and the EU subordinated to NATO’s designs, Westlessness is indeed just an empty, constipated concept: all reality is conditioned by the toxic dynamics of China ascension and US decline.

The irrepressible Maria Zakharova once again nailed it: “They spoke about that country [China] as a threat to entire humankind. They said that China’s policy is the threat of the 21st century. I have a feeling that we are witnessing, through the speeches delivered at the Munich conference in particular, the revival of new colonial approaches, as though the West no longer thinks it shameful to reincarnate the spirit of colonialism by means of dividing people, nations and countries.”

An absolute highlight of the MSC was when diplomat Fu Ying, the chairperson on foreign affairs for the National People’s Congress, reduced US House Speaker Nancy Pelosi to dust with a simple question: “Do you really think the democratic system is so fragile” that it can be threatened by Huawei?