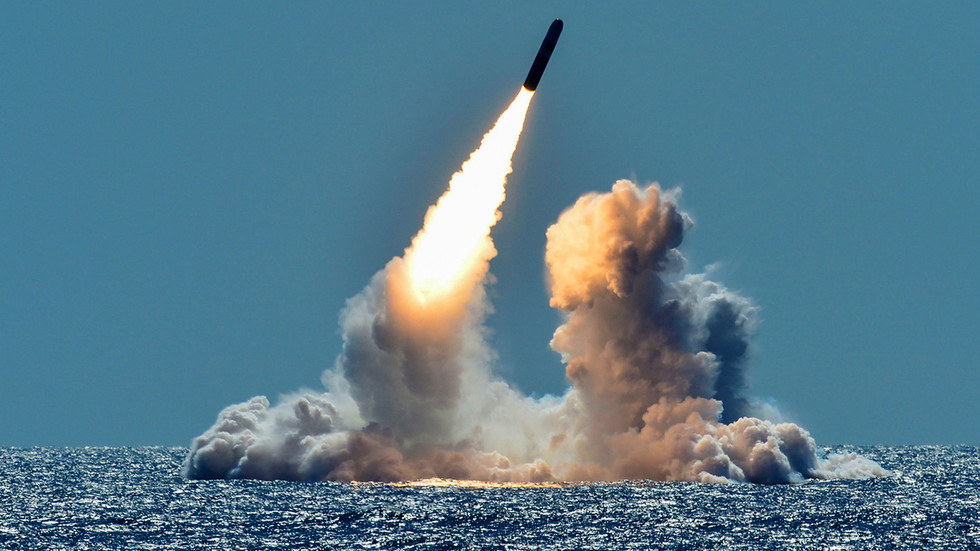 5 Feb 2020 – The US has deployed “low-yield” nuclear missiles on submarines, saying it’s to discourage nuclear conflict with Russia. The move is based on a “Russian strategy” made up in Washington and will only bring mass annihilation closer.

In a statement released earlier this week, US Under Secretary of Defense for Policy John Rood announced that

“the US Navy has fielded the W76-2 low-yield submarine launched ballistic missile (SLBM) warhead.” This new operational capability, Rood declared, “demonstrates to potential adversaries that there is no advantage to limited nuclear employment because the United States can credibly and decisively respond to any threat scenario.”

The threat underpinning justification for this new US nuclear deterrent had its roots in testimony delivered to the House Armed Services Committee in June 2015 by US Deputy Secretary of Defense Robert Work, who declared that

“Russian military doctrine includes what some have called an ‘escalate to deescalate strategy’ – a strategy that purportedly seeks to deescalate a conventional conflict through coercive threats, including limited nuclear use.”

However, any review of actual Russian nuclear doctrine would have shown this to be a false premise. Provision 27 of the 2014 edition of ‘Russian Military Doctrine’ states that Russia

“shall reserve the right to use nuclear weapons in response to the use of nuclear and other types of weapons of mass destruction against it and/or its allies, as well as in the event of aggression against the Russian Federation with the use of conventional weapons when the very existence of the state is in jeopardy. The decision to use nuclear weapons shall be taken by the President of the Russian Federation.”

Russian Threat, Made in America

Despite this, the concept of ‘escalate to deescalate’ as official Russian military doctrine had become ingrained in official US nuclear doctrine by 2018, with the publication of the US Defense Department’s Nuclear Posture Review (NPR). Moscow, the 2018 NPR claimed,

“threatens and exercises limited nuclear first use, suggesting a mistaken expectation that coercive nuclear threats or limited first use could paralyze the United States and NATO and thereby end a conflict on terms favorable to Russia. Some in the United States refer to this as Russia’s ‘escalate to deescalate’ doctrine.”

In response to this “made in America” Russian threat, the 2018 NPR identified a requirement to modify a number of submarine-launched ballistic missiles (SLBMs) with low-yield nuclear warheads to strengthen US nuclear deterrence by providing US military commanders with a weapon that addresses

“the conclusion that potential adversaries, like Russia, believe that employment of low-yield nuclear weapons will give them an advantage over the United States and its allies and partners.”

As was the case with Robert Work’s 2015 congressional testimony, the 2018 NPR did not provide the source for the existence of a Russian ‘escalate to deescalate’ doctrine, except to note that it originated in the US – not Russia. Nonetheless, based upon the 2018 NPR, President Donald Trump requested that the Defense Department acquire a new low-yield nuclear warhead for the Trident SLBM, setting in motion a process which culminated in the recent announcement that this new warhead had reached operational capacity.

In response to President Trump’s request, a letter, signed by a laundry list of notable American statesmen, politicians and military officers, including former Secretary of State George Schultz, former Secretary of Defense William Perry and the former Vice Chairman of the Joint Chiefs, General James Cartwright, was sent to the Senate Majority Leader, Mitch McConnell, stating that there was no need for this new “low yield” warhead. The letter furthermore noted that the premise of this warhead — the so called ‘escalate to deescalate’ Russian doctrine — was derived from a “false narrative” combining non-existent Russian intent with an equally fictitious “deterrence gap” that could only be filled by the new nuclear weapon. This letter fell on deaf ears.

Also: US says it won’t rule out nuclear first strike, because allies wouldn’t trust it otherwise

At a meeting of the Valdai Club in October 2018, Russian President Vladimir Putin addressed the issue of Russian nuclear doctrine, prompted by questions raised by the publication of the 2018 NPR.

“There is no provision for a pre-emptive strike in our nuclear weapons doctrine,” Putin declared. “Our concept is based on a reciprocal counter strike. There is no need to explain what this is to those who understand, as for those who do not, I would like to say it again: this means that we are prepared and will use nuclear weapons only when we know for certain that some potential aggressor is attacking Russia, our territory…[o]nly when we know for certain — and this takes a few seconds to understand — that Russia is being attacked we will deliver a counter strike. This would be a reciprocal counter strike. Why do I say ‘counter’? Because we will counter missiles flying towards us by sending a missile in the direction of an aggressor.”

There’s No Such Thing as ‘Limited’ Nuke Use

“No one has ever succeeded in advancing any persuasive reason to believe that any use of nuclear weapons, even on the smallest scale, could reliably be expected to remain limited.”

This fact holds as true today as it did when the article was written. Perhaps there is no better voice to emphasize this point than Russian President Vladimir Putin, again addressing the 2018 Valdai Conference.

“Of course, [the decision to launch nuclear weapons in defense of Russia] amounts to a global catastrophe, but I would like to repeat that we cannot be the initiators of such a catastrophe because we have no provision for a pre-emptive strike. Yes, it looks like we are sitting on our hands and waiting until someone uses nuclear weapons against us. Well, yes, this is what it is. But then any aggressor should know that retaliation is inevitable, and they will be annihilated.”

And we as the victims of an aggression, we as martyrs would go to paradise while they will simply perish because they won’t even have time to repent their sins.

The Trump administration would do well to ponder these words as they embrace the false deterrence of the new “low yield” nuclear-armed Trident SLBM. The fact of the matter is it deters nothing, and only invites global annihilation.

As a chief weapons inspector for the United Nations Special Commission in Iraq, Scott Ritter was labeled a hero by some, a maverick by others and a spy by the Iraqi government. In charge of searching out weapons of mass destruction within Iraq, Ritter was on the front lines of the ongoing battle against arms proliferation. He has had an extensive and distinguished career in government service and is an intelligence specialist who served 12 years in the U.S. Marine Corps, including assignments in the former Soviet Union and the Middle East. In 1991, Ritter joined the United Nations weapons inspections team, or UNSCOM. He participated in 34 inspection missions, 14 of them as chief inspector. Ritter resigned from UNSCOM in August 1998, citing U.S. interference in the inspections. He is the author of many books, including Iraq Confidential: The Untold Story of the Intelligence Conspiracy to Undermine the UN and Overthrow Saddam Hussein; Target Iran: The Truth about the White House’s Plans for Regime Change; and Waging Peace: The Art of War for the Antiwar Movement. Contributor author: Deal of the Century: How Iran Blocked the West’s Road to War,  Clarity Press. He is a graduate of Franklin and Marshall College, with a B.A. in Soviet history.